There are lots of good people in British boxing, I promise you, although at the moment it might not seem that way. So people will ask me, having seen two British boxers brawling at a post-fight press conference in Munich, "what do you see in that sport?" And, for once, I worry I won't know what to say.

If our German hosts thought us Brits lacked class before the fight itself - Vitali Klitschko beat Dereck Chisora on points, by the way - then by the time they left the Olympiahalle they must have thought good old Blighty had embarked on some grand experiment in Darwinism in reverse. 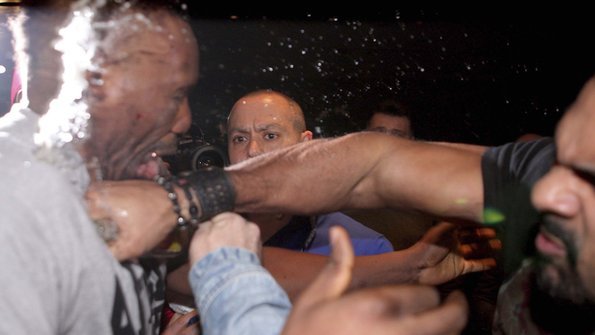 "This behaviour is unacceptable," said Vitali's younger brother Wladimir, in whose face Chisora had spat water earlier that evening. "Saying you are going to shoot someone? This is embarrassing, disgusting. This is a criminal case."

I regret to report that Wladimir's ears had not deceived him and that dear old Dereck - quirky old 'Del Boy', with his penchant for antique phone boxes and parking meters - had indeed threatened to shoot David Haye.
Chisora's soaring rhetoric - repeated on at least four occasions - followed a five-minute melee which was accompanied by the sound of shattering glass and saw Haye launch at one of Chisora's entourage with a video camera tripod.

Throw in both trainers, two very large Ukrainian world champions lurking in the wings, unwitting journalists - some of them women - heavy television equipment, all in a fairly small room, and you can imagine the chaos. Chisora's weigh-in slap of Vitali suddenly seemed playful in comparison.

As to who started what, it is difficult to say. Certainly Haye's hackles were raised when the Klitschkos' manager, Bernd Boente, informed him - with some relish, I should say - that any hopes he had of fighting either Klitschko were doomed. But it was when Chisora joined in the Haye-baiting that it all went off.

Before the fight - by which I mean the actual one, Vitali v Chisora - rumours abounded that Klitschko's promoters were unhappy with Haye's presence in Munich, the former heavyweight world champion having been invited as a summariser by Frank Warren's fledgling television arm BoxNation.

In addition, Don Charles, Chisora's trainer, was angered by comments made by Haye's trainer Adam Booth, who told BBC Sport on Friday that he did not expect Charles' man to last into the middle rounds.

Throw in the madness of Chisora, which seemingly knows no bounds - he had publicly threatened to "slap" Haye on numerous previous occasions - and it was a case of tick-tock, tick-tock, take cover, bombs away.

As for Chisora's repeated accusation that Haye deliberately struck him with a bottle or a glass, that is one detail that may be impossible to verify. Unfortunately for Chisora, his shooting threat was seen and heard by hundreds. Many of them with cameras. And that means hundreds will translate to millions.

The real disappointment of this rather tawdry tale is that Chisora had gone a long way towards redeeming himself in the fight we had come to see. In fact, my headline was written: "Chisora all heart after all".

Chisora, with only 17 fights behind him, demonstrated tremendous bravery over 12 rounds against the vastly more experienced champion, although the judges were right to award the fight to 45-fight veteran Vitali by wide margins.

Indeed, you could say the 28-year-old Chisora had already won a personal battle of sorts with Haye, having given a better account of himself against Vitali than his rival did against Wladimir in Hamburg last July.

Chisora's promoter Warren was not over-egging it too much when he suggested his man had given Vitali his hardest fight since Lennox Lewis beat him way back in 2003, so wholehearted had been Chisora's display.

But one minute Charles is up on the dais telling the press how proud he is of his fighter, the next Chisora is trading blows with Haye. Having been so upset by Chisora's pre-fight behaviour, it is very likely Charles could walk away. If there is anything left to walk away from.

For Chisora can expect heavy sanctions, from a variety of boxing organisations and perhaps even the law.

As for Haye, he is in grave danger of being remembered for all the wrong reasons, and that would be a shame. Divorced from the nonsense, he is erudite and eloquent. He is also, lest we forget, a former two-weight world champion who, had he chosen to stay down there, had the potential to be one of the few genuinely great cruiserweights.

But how many will remember that stirring win against Jean-Marc Mormeck in Paris in 2007 when millions have heard you compare a fight to a "gang rape" - as he did before meeting Audley Harrison in 2010 - and seen you attack someone with a tripod on TV?

Before the fight proper some accused me of spouting sanctimonious claptrap regarding Chisora's weigh-in slap: "This is just how boxing is, hard men doing dangerous things, time you learned to live with it."

While there are those who imagine the boxing world to be a hive of villainy, that is not how boxing is. For, beneath the tips of treacherous, unpredictable icebergs, the mass of boxing is made up of sound, solid folk.

To love boxing is to love the edge, the danger, the shenanigans - what some might affectionately call "the nonsense". But what happened in Munich on Saturday went so far beyond "the nonsense" as to be almost indecipherable. Whether it actually was boxing or not is almost incidental. It can't be good for the sport.