Belief may not be enough for Andy Robinson

Andy Robinson is a man who should be drowning in statistics. Scotland have now lost five Tests in a row and won only two of 13 Six Nations matches since Robinson took over as head coach. Yet, not only does Robinson stay afloat, he retains the luxury of choice: not whether the Scots can put up with him any longer, but how much longer he can put up with them.

“I can’t hide away from what you’re saying and you’re right to bring it up,” said the former England coach when reminded of the stark facts following his side’s 17-23 defeat by France in Edinburgh. He could have added: “And what are you going to do about it? Sack me? Who else is out there?”

Robinson is right when he says his side are on the right track, almost there. “I have total belief that we have the ability to win and that belief was strengthened even more today,” said Robinson, before adding: “As it was against Wales, and in the England game.”

But believing you have the ability to win and actually winning are two different things. Which is why the France defeat might be the beginning of the end of his tenure. It further suggests his belief, however sincere, is not seeping through to his players, at least not as a team. 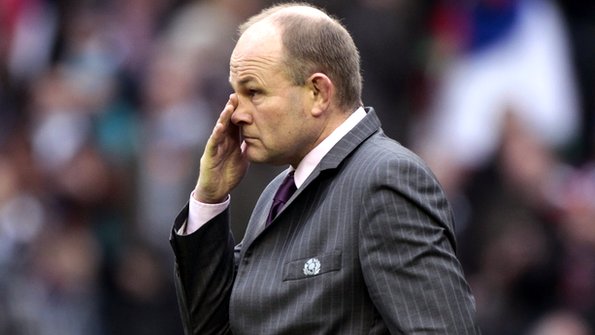 Andy Robinson coached England from 2004-2006, before taking over Scotland in 2009. Picture: Reuters

Scotland should have won on Sunday. For the first half an hour, they played a high-octane brand of rugby that had the visitors, by France skipper Thierry Dusautoir’s own admission, in a state of shock and awe.

The Scotland back-row of John Barclay, Ross Rennie and David Denton was immense. When it was suggested to Robinson that it was the most intense display ever by a Scottish back-row, the Englishman grinned, before recalling the triple threat of Calder, Jeffrey and White. “Ah, but not far off.”

Rampaging lock Richie Gray once again looked like a British and Irish Lion in the making, but it was the flashes behind the pack that were perhaps most heartening, given the Scottish backs’ inability to score tries of late.

Before he was forced off with an injury, the recalled Mike Blair was a pinball of energy at scrum-half, while full-back Stuart Hogg, the first teenager to start a Test for Scotland since Jim Renwick in 1972, was perhaps the most potent attacking threat on either side.

Aside from the Hawick man’s first-half try, one moment, when he left Dusautoir clawing at thin air with a vicious step off his left peg, had them purring in the stands. Hogg is a bar-emptier, and you could argue Scotland have been lacking a bona fide bar-emptier since the days of Gregor Townsend.

It was small moments – with big consequences – that let Scotland down. Greig Laidlaw has talent but the ease with which he was ploughed into the turf by opposite number Francois Trinh-Duc before Wesley Fofana’s try suggests the Edinburgh man needs to stack on a fair few pounds.

Lee Jones, too, despite scoring a first international try, was trampled over by the imposing Julien Malzieu before Maxime Medard’s crucial second-half score.

While Scotland, who managed one try in their previous five Tests, managed two against France, there should have been more, with Blair and skipper Ross Ford becoming isolated when there should have been support on their shoulder. Scotland paid for their lack of accuracy after the break, when France, having rolled with the first-half punches, tightened things up, began to boss the breakdown and demonstrated the merciless nature their hosts had lacked.

“I played in Scotland,” said France head coach Philippe Saint-Andre. “I lost a match after we had burst like popcorn and we never came back into the game. Today I saw a real squad. Coming back from 10-0 down in a full stadium, without panicking, it proves that this squad has guts.”

Formidable as this France outfit looks, they face a huge task to win the Championship. The cancellation of their game against Ireland a fortnight ago means they must play the Irish and England at home before a potential title decider against Wales in Cardiff, on consecutive weekends. “That’s three out-of-category climbs,” said Saint-Andre, using a cycling analogy.

Saint-Andre was effusive in his praise for Scotland – “if Scotland continue like this they will beat any team in the world” – which may or may not please Robinson to hear. Praise sounds great when you are winning; when you are losing, it can often seem like a patronising pat on the head.

The fact Murrayfield was a 67,000 sell-out for this fixture for the first time since its redevelopment in 1994 tells you the Scottish fans have faith in what Robinson is trying to do. But how long will Robinson keep faith his players can achieve what he believes they can?

Much might depend on Scotland’s final two games against Ireland and Italy, both away from home. Turn promise into results – what you might call sporting alchemy – and Robinson may decide it is worth continuing with his project until the World Cup in 2015, as is the plan.