Celtic classic in the making

Witnessing Wales dismantle Fiji in Hamilton, there were times when I thought I might be watching the 2011 World Cup winners.

And then I tuned in to see Ireland do a number on Italy. My oh my, next weekend's Celtic quarter-final bash in Wellington is going to be a barnburner - I haven't looked forward to a rugby match this much in years.

Against South Africa in their World Cup opener, Wales did everything but secure the win - but Warren Gatland's men appear to have been buoyed by the nature of that defeat. Most of the evidence from that night in Wellington suggested Wales had all the tools to make a significant mark in this tournament, except perhaps the belief.

Against Fiji, Wales were positively frothing with the stuff; they were ruthless and they were clinical. True, the Pacific islanders, who for whatever reason have chosen to adopt an alien kicking game, were distinctly ordinary. But Wales took advantage of Fiji's every weakness and appear to have discovered a heady blend at the perfect juncture. 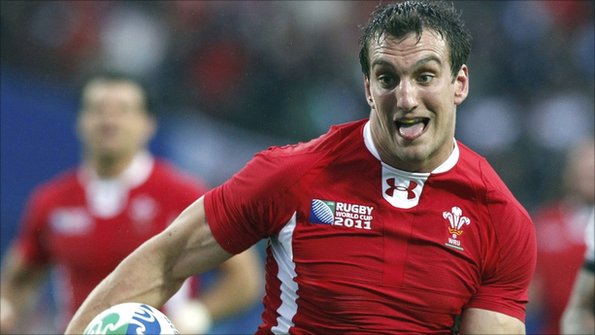 Captain Sam Warburton has been outstanding in each of Wales' World Cup matches. Picture: Reuters

Skipper and open-side flanker Sam Warburton looks to have pretty much the lot: he fetches, he links, he supports, he scores. He is top of the range alright, a limited edition model with bells and whistles as standard, made all the more remarkable by the fact he is only 22.

Number eight Toby Faletau is not far behind, while lock Luke Charteris continues to impress in the set-piece and in the loose. And with Gethin Jenkins and Adam Jones providing considerable ballast in the front row, the Welsh pack should fear no-one.

But it is out back that Wales really start to purr. Scrum-half Mike Phillips is the man who ensures the phases run together like mercury rather than slowly turn to stone. And in fly-half Rhys Priestland, Wales look to have found a solid campaigner - knowing when to play and when not to, flat passes on the gain line, happy for others to steal the show.

Jamie Roberts runs straight and hard, which some people might think is no great shakes. But running straight and hard is invaluable when the players outside you are gifted enough to take advantage of the craters you create in the opposition defence.

In Scarlets wing George North, Wales have a gem. Weighing in at more than 17 stone and with sweet hands and feet like a Broadway hoofer, the 19-year-old is boxing's loss and rugby union's gain. Meanwhile, Scott Williams at outside centre showed silky running skills and ploughed penetrating lines to make it four tries in two World Cup starts.

Some of Wales' running had their fans drooling. One move, a sweeping advance from inside their own 22 which took them almost the entire length of the field, was particularly instructive: the first man looked up, saw it was on and trusted his team-mates to execute. Ambition and expression - in squally showers and with a greasy ball. See, it can be done.

And then there was Ireland. If Warburton is top of the range with all the bells and whistles, Sean O'Brien is all that with added bullbars. The Kiwis cannot get enough of him - their commentating team appear to have settled on the adjective 'colossal', and the feeling over here is that the Leinster open-side is a front-runner for player of the tournament. 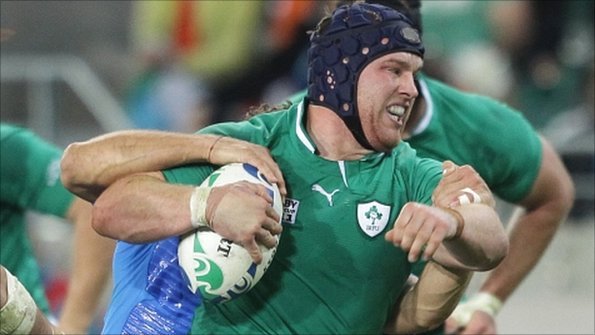 With the 'Tullow Tank' leading the charge, followed closely by Jamie Heaslip and Stephen Ferris (a "big-time metre gobbler", according to one Kiwi publication), the match-up between Ireland and Wales' back rows is likely to be a humdinger. Throw the combative Cian Healy into the mix, as well as the rejuvenated Paul O'Connell, and the set-piece is set to blow.

Italy clearly came to Dunedin with a game-plan for Ireland - get amongst them, wind them up, make them punchy, let's see if we can get one or two of them carded. What was most impressive about Declan Kidney's men was the way in which they saw it coming, soaked up the nonsense and took advantage of Italy's chaos and indiscipline. In the final reckoning, Ireland's 36-6 victory against Italy was every bit as ruthless as Wales' 66-0 mauling of Fiji.

This is not how this World Cup was supposed to be. A northern hemisphere-southern hemisphere knockout split is one thing; that observers should be suggesting the northern side of the draw is more likely to produce the eventual winners is the stuff of a madman's dreams. Throw in the fact that the two northern sides looking most likely are Wales and Ireland and you start to wonder if the madman in question has been lunching on white spirits.

With hosts New Zealand now Carter-less, Wales and Ireland suddenly look like copper-bottomed contenders. And I, for one, would love to see either one of them go on and do it.

There have been times during my stay in New Zealand when I have felt like a traitor for daring to suggest England's way might not be the right way to the 'promised land'. And I am not so arrogant to think that there is a 'right' way that the game of rugby should be played.

But if the rugby that wins this tournament turns out to be 15-man rugby, artful rugby, attacking rugby, dynamic rugby, then this tournament will have been a success. It is a shame either Wales or Ireland will be heading home next weekend, because if rugby wants to extend its global appeal and attract new supporters, the sport needs sides like these.