Down on Queens Wharf on Wednesday, I spotted several members of the England squad taking an evening constitutional. Followed every step of the way by a full Scottish pipe band. From where I was sitting, the England boys failed to see the funny side.

Kids' stuff, really, next to the ferocious and sometimes absurd build-up to the Grand Slam decider of 1990 - "I wasn't exactly leading the charge at Culloden," England captain Will Carling told one scheming Scottish journalist - but proof, if proof was needed, that you cannot beat a rugby international between the Auld Enemies for fun, games and trickery.

The Thursday before that 1990 Calcutta Cup encounter, hooker Brian Moore slipped a copy of Shakespeare's Henry V into Carling's hands, opened at Act III, scene I: "Once more unto the breach, dear friends" and all that. England manager Martin Johnson, on the other hand, is rather more prosaic: "There is a lot of history there," said Johnson. "But that is all for the build-up and the exterior. It is about us playing well. If we do that we will put ourselves in a good place."

While Johnson might come across as a joyless individual at times, he is right that England need to be passion-killers at Eden Park on Saturday. The suspicion is that the only way Scotland can win by the eight points they need in order to advance to the quarter-finals is if England let the occasion get to them, lose their heads and get drawn into a tear-up. Which is exactly what Scotland head coach Andy Robinson will want to happen.

Scotland have not beaten England by more than six points since 1986 and have shown no evidence at this World Cup that they have the guile and the wherewithal to carve England up in Auckland. "They've got to beat us by eight, so they've got to chuck the ball around," said England scrum-half Ben Youngs. "And they're not renowned for scoring many tries."

Added the Leicester number nine: "We've got our game-plan and as long as we stick to it, we should be OK: playing in the right areas of the pitch, making sure we keep hold of the ball and we're disciplined. And all the pressure is on Scotland."

Whether Youngs and his team-mates are aware of the different permutations is uncertain - as far as I am aware, no-one in the England squad has a degree in probability, which is what is required to pick the bones out of Pool B - but the idea that Scotland need to "chuck the ball around" is actually a red herring: in actual fact, Scotland could still qualify for the last eight without needing to score four tries, which is why Johnson is simply concentrating on winning.

International rugby is about horses for courses, and Johnson will take the view that any win against Scotland is a worthy one. But from an England perspective it would be heartening to see them building on their thumping of Romania and that the game-plan is to play in a more expansive vein: if you possess three-quarters that can hurt the opposition, then you might as well use them. Does Joe Ansbro want to see Manu Tuilagi running at him all night? Of course not, because it must be like trying to stop a baby rhino with a dart up its backside.

If England play against Scotland as they did against Argentina in their opening game, it may well be enough to see them through. But against superior opposition in the knockout stages, you suspect Johnson's men will need to ask more questions behind the scrum.

While the Scots have potential game-breakers in Sean Lamont and Max Evans, their best chance of victory might be forcing England into mistakes at the breakdown, where England have leaked countless penalties in their three World Cup games to date. 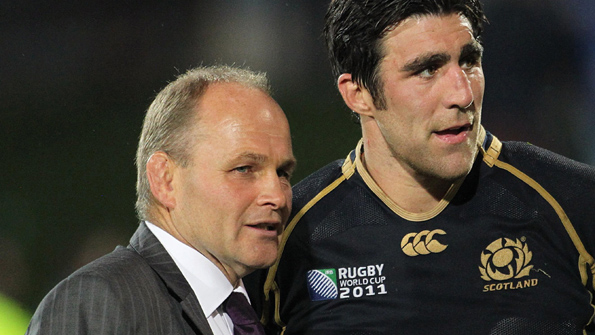 Johnson claimed he was happy with England's improved discipline against Romania, but his side still lost the penalty count 12-11, making that 38 penalties conceded in three games. The referee in Auckland will be South Africa's Craig Joubert, who has been whistle-happy at the breakdown so far in this tournament. And with the eagle-eyed Chris Paterson in the Scotland line-up, a similar number of infringements could prove very costly.

However, while Scotland got the better of England at the breakdown in the Six Nations encounter in March and England defence coach Mike Ford reckons the Scots have stepped it up since then, the loss of the destructive Kelly Brown, who took a bang to the head during the game against Argentina, is a major blow for Robinson.

Without Brown in the side England should find it easier defending for extended periods, without resorting to giving away penalties, and to win quick ball. And quick, clean ball will be key for England in terms of controlling and dictating the flow and pace of the game.

"It's going to be a tough game," said England prop Matt Stevens, who was penalised heavily in England's defeat of Georgia. "Scotland have their backs against the wall and will come out fighting. We've got to take that next step up with our physicality and our discipline."

England will be up for it, for sure ("I couldn't think of anything better than beating Scotland," admitted Youngs). But while Scotland will sing of Bannockburn before the game - "their fury, their frustration," as Johnson put it - Johnson will leave his copy of Shakespeare on the shelf. When the blast of war blows in England's ears they will stiffen the sinews and summon up the blood, no doubt. But while it doesn't quite have the same ring to it, they would do well to substitute the "hard-favour'd rage" with staying disciplined and doing the basics right.

P.S: Red Hot Chilli Pipers are in New Zealand, apparently, "summoning the spirit of Bannockburn". At least according to the advert I saw. Whether any Englishmen who dare enter the arena will be slaughtered with spears, we were not told.

P.P.S. I spotted referee Wayne Barnes at Auckland airport with a copy of the novel Shantaram under his arm. The book is about a felon on the run having committed a string of heinous crimes - having missed a legitimate penalty from James Hook for Wales against South Africa and Felipe Contepomi's run off-side for Argentina against Scotland, fiction might become fact for Barnes if he makes any more mistakes in New Zealand.