England still searching for another gear

At the end of a week which taught us that booze, bar-room bundles, blonde 'stunners' and England rugby players do not mix - unless you are a headline writer for a red top rag - Martin Johnson's men would have hoped for an emphatic display against Georgia in Dunedin to keep the critics at bay. But on a weekend when some of their biggest rivals revealed high-ranking hands, England kept their cards close to their chests.

Georgia, it should be noted, were magnificent, especially in a first half when they had 75% of territory and mangled England at the breakdown. With Montpellier flanker Mamuka Gorgodze - voted best overseas player in the French Top 14 last season - running riot, England's back-row, as against Argentina, was made to look pedestrian at times.

And if it were not for an off-beam display from fly-half Merab Kvirikashvili, who looked as if he was kicking with a beach ball, England might have been behind at half-time.

As it was, England's superior conditioning told in the final quarter against a side which played Scotland only on Wednesday. While the International Rugby Board must be praised for ploughing money into the sport in less-established countries, burdening the so-called minnows with such short turnarounds only heightens the sense of a them-and-us attitude: come and join the party, have a good time, but we don't really want you to win anything. 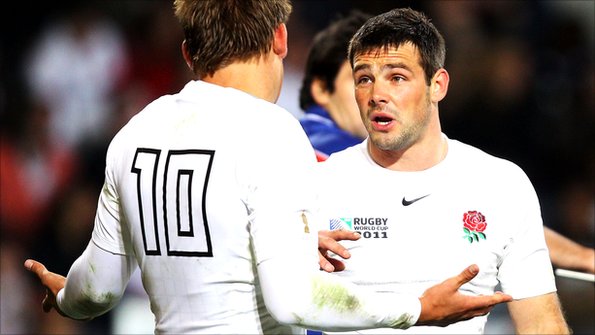 England must improve if they are to challenge in the knockout stages. Photo: Getty

The question is, can the players he has at his disposal get that much better in time to be able to challenge in the knockout stages? Given their recidivist nature - they gave away 11 penalties in the first half, six in the first 15 minutes - it seems doubtful.

There were signs against Georgia of a good side desperately trying to get out. When play began to break up in the second half, England's three-quarters served notice of what they are capable of, with the back three coming looking for the ball and outpacing and outmuscling the opposition. As for 38-year-old lock Simon Shaw - someone check that man's passport - he played with the energy of a man half his age.

However, the first 60 minutes will have made for worrying viewing for Johnson, who must feel like the driver of a big truck, desperately waggling the lever in an attempt to find another gear - a gear his side proved they had in this season's Six Nations and in victories over Australia last year.

With a hard-fought victory over Argentina in the bag, Johnson would have been looking for signs that his side are congealing into a more cohesive unit, finding a rhythm, putting together patterns of play. However, any structure was undermined by indisciplined forwards, a lack of accuracy and a Georgian side that, at times, looked like they wanted it more (although I should add, I am sure that is not the case). 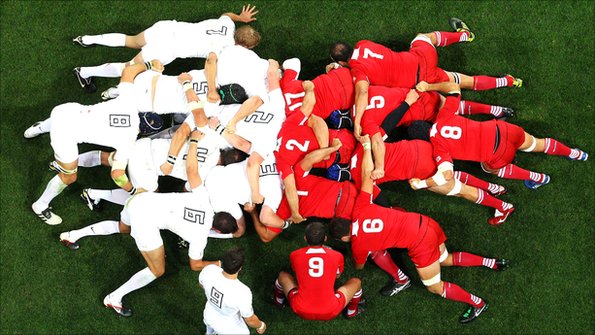 There were signs against Georgia of a good side desperately trying to get out. Photo: Getty

There will be those, as after England's narrow defeat of Argentina, who will accuse me of not understanding the nuances of tournament rugby, who will say that England do not want to be peaking too soon. But while other sides - Wales and Ireland among them - at least look to have a set game-plan and a structure in place, the house of England remains shrouded with scaffolding two games in and the suspicion is that more clinical sides than Georgia will be able to bring what appears to be a rickety edifice tumbling to the ground.

"If ever we needed to understand what the game is about at this level, the big game of the weekend - Ireland v Australia - indicated what it is about," added Johnson. "The bigger the game you play, the more simple it is - maintain possession, don't give away penalties, build pressure in all aspects of the game and you will give yourself a chance. We need to be rehearsing that."

England, lest we forget, were humiliated 36-0 by South Africa in their second match in 2007 and eventually reached the final. But one wonders if they have enough leaders in New Zealand, enough big characters, to turn their form around. And if Johnson has a game-plan, who is going to be the one to tell him that it might need tinkering with?

With one more 'rehearsal', against Romania next Saturday, before they face Scotland in the final group game, England need to find that other gear. If not, this could be remembered as the World Cup when England went loco in Queenstown. Or not, whatever the truth may be.

PS. I have spoken to several people who were in the Queenstown bar where England were supposedly up to no good, and the consensus is that they were all pretty well behaved. I suppose one man's 'couple of sherbets' is another man's 'out of control'. But it seems a sad day when any rugby team, England or not, can't go out for a few post-match lagers. Personally, I don't think they should be allowed to smile in public after a below-par performance. The cheek of it!