"There's been a lot of hype, but on 2 July David Haye will be thrown into the lion's den and the door will be closed behind him. Everyone else will be gone, there'll be no-one else to help him." Emanuel Steward, Wladimir Klitschko's trainer.

You hear it from boxers before every fight: "I'm in the best shape of my life." You hear it from journalists, keen to let others know they have been granted access to a boxer's inner sanctum: "I watched him in the gym, and he's never looked so good."

But in boxing, the clues to the outcome of a fight are more often locked away inside a boxer's mind than written large across his chiselled torso. 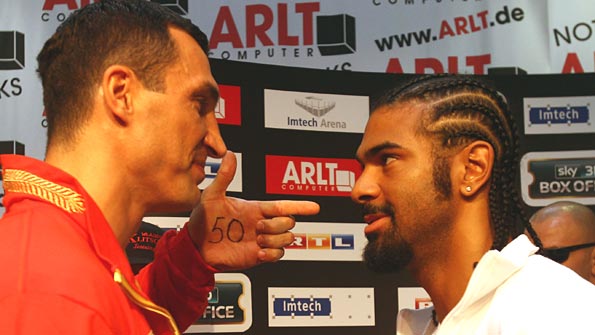 Haye will finally face one of the Klitschko brothers on Saturday night. Photo: Getty

David Haye polarises opinion, partly because no-one really knows who or what he is. Is he the obnoxious boor his tasteless stunts would suggest? Or a nice guy, but a huckster with it? Just playing the game, cranking up the interest, messing with Wladimir Klitschko's mind.

Wladimir's big brother Vitali reckons it is all an act and that all the games are mixing Haye up inside.

Emanuel Steward, Wladimir's trainer, believes Haye is high on the hubris created by those around him and that he will shrivel when the first bell rings: "That's what he'll experience in that first round, he'll be on his own, all the games will be unimportant and he'll be eaten up in the big, hungry lion's den."

And this is the rub: if it is all an act, and he is not the buffoon a lot of people think he is, then maybe he is not as unflappable as he wants everyone to believe, either.

I have it on good authority he is prone to the odd pre-fight anxiety attack, and while he has fought in a few lion's dens before, he has never seen a den as big the one he will be thrown in on Saturday night.

For Wladimir, meanwhile, the 45,000 capacity Imtech Arena is home from home. Wladimir's last three encounters, all of them stadium fights, have been watched by 155,000 paying customers.

Steward is confident his charge will follow orders and keep his shape because he knows Wladimir is essentially a conservative fighter and he has seen him do it all before.

Haye claims he has a whole new game-plan for Wladimir, but when he climbs through the ropes, gets under those lights and looks out into the dark expanse, will the doubts creep in and will he revert to type? If so, he could be in for a painful night.

The suspicion is, Haye's usual tactic of standing off and restricting himself to occasional sorties will not cut it against Wladimir.

It worked against Nikolay Valuev, the giant Russian from whom Haye won the WBA belt in 2009, because Valuev is an ordinary fighter.

Stay at range for long periods against Wladimir, however, and allow him to get into a groove and he will jab your head off for 12 rounds, without even needing to unsheathe his right hand.

The hope, for Haye fans, is that the Englishman is not bluffing and that this new game-plan includes an increased work-rate and far more explosions: the three men to have beaten Wladimir did not stand off, they came forward and attacked from the start.

Ross Puritty, a journeyman heavyweight who knocked out Wladimir in 11 rounds in 1998, demonstrated that a granite jaw combined with perseverance could get the job done.

Corrie Sanders, who knocked Wladimir out in two in 2003, demonstrated that showing a complete lack of respect, and a total disregard for one's own safety, could also leave Wladimir reeling.

But a front-foot strategy comes with inherent risks: Lamon Brewster had to absorb so much punishment in his fight with Wladimir, he was on the floor a round before the fight ended and almost out on his feet when he landed the knockout blow.

Which takes us to the two killer questions: can Haye suck it up like Brewster, in order to detonate bombs of his own? And does he have the stamina, like Puritty, to keep relighting fuses if his early bombs do not go off?

One argument is that Haye answered any questions about his punch-resistance and stamina by going 12 rounds with Valuev.

But against Valuev he fought in spurts; Valuev does not have a jab like a swinging log, as Wladimir has; and Valuev, unlike Wladimir, was not in the habit of crashing down on his opponents like a breaking wave.

All that leaning and shoving would break the resolve of a packhorse, which makes you think Haye, never a fan of roadwork, has to jump on Wladimir early - which is easier said than done.

In Wladimir's last fight but one, against Eddie Chambers, you could hear the American's corner imploring him between rounds to "do your thing and get inside". They had clearly come with a game-plan, but they were unable to implement it. And no wonder.

Wladimir is a far better fighter now than the one blasted out by Brewster in 2004. He looks more comfortable on the back foot - and he takes even fewer risks.

"If Wladimir was more aggressive he'd be the most dangerous heavyweight in history," says Steward, who was demonstrably frustrated that it took his man 12 rounds to get rid of Chambers.

Predicting the outcome of a heavyweight contest is a fool's game - but, luckily, I don't mind being labelled a fool.

Expect Haye to come in light, to gamble it all on speed and to come out all guns blazing. And, if you are a fan, hope he rips Wladimir's head off early - because, if it goes beyond four rounds, Wladimir will drag him out to sea and drown him.