John Lennon was fond of saying that while he was born in Liverpool, it was in Hamburg that he became a man. David Haye, who thought he was the man, was made to look like a boy by Wladimir Klitschko in the same German town. In and out of the ring.

Haye's fans, an estimated 10,000 of whom followed him to Germany, hundreds of thousands more who paid for the fight back home, had every right to feel that two years of trash-talk, two years of vainglorious posturing, two years of nonsense, had culminated in nothing more than the dampest of squibs.

The sight of bedraggled Brits roaming the streets surrounding the Imtech Arena in sheeting rain, desperately searching for cabs that never came, was a depressing one. Not much Haye could have done about the weather, but his fans had reason to believe he would at least make it worth their while. Sorry, David, but if you will promise the earth. 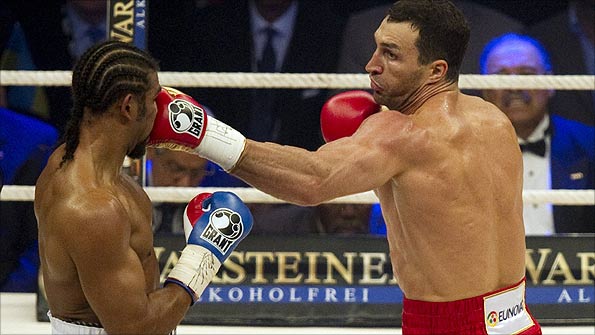 All week people were asking us journalists about the fight - long-lost pals, ex-girlfriends, people who really are not that into boxing. It is doubtful many of these floating fans will show much interest again.

Even Klitsckho sounded disappointed by his rival's lack of venom. "He was supposed to be aggressive and he was supposed to knock me out but he was very cautious and very careful," said Klitschko, who now holds three of the four heavyweight belts, while older brother Vitali holds the other one. "Nothing about his style impressed me."

The 35-year-old Ukrainian was as classy at the press conference as he had been in the ring. Switching seamlessly between German, English and Russian, he thanked the "amazing" British fans (some of whom hurled abuse at Wladimir and his brother throughout Friday's weigh-in) and told how Haye's various stunts had motivated him. A case of 'when trash-talk goes horribly wrong'.

And when Haye announced he had a broken toe, Klitshchko said what everyone else was thinking: "I give you some advice - never say you've got an injury straight after the fight because you look like a sore loser, it doesn't look good." Thirteenth round to Klitschko.

Haye's injury claim will have no doubt delighted punters who paid upwards of 15 quid to watch the fight on telly. And it will have confirmed that Haye, who surely should have been advised to keep news of the injury under his hat and leak out a few months down the line, could learn a lot from Klitschko about grace.

It is unlikely Haye's toe - which, in truth, did look rather misshapen when he waved it in our faces - was the difference between defeat and glorious victory, as he claimed it was. Klitschko was simply too big, too strong, too skilful and too quick, just as he always said he would be.

Haye discovered what almost all of Klitschko's previous 58 opponents already knew, that formulating a game-plan to beat him and implementing it on fight night are two very different things. There are clever people out there who think we can travel in time, but that does not necessarily mean it will ever be done.

Klitschko's jab is up there with the best ever in the division - as good as Larry Holmes? As good as an early Ali? - a piston that never seems to run out of steam. And his right hand, when he chooses to use it, is a barnstorming thing of beauty.

Defensively, he is the boxing equivalent of a medieval castle - thick, high walls surrounded by a crocodile-infested moat. As American Olympic hopeful and Klitschko sparring partner Michael Hunter told me: "You have to fight his arms before you can fight him."

Still, far more illustrious names than myself - Lennox Lewis, George Foreman, Carl Froch, Barry McGuigan - all thought the only way Haye could win the fight would be to up the work-rate, back Klitschko up and take risks. "You don't box with a boxer," said Foreman, "you go out there and mix it up". That, we all thought, would be this much-vaunted new blueprint. But, other than the third round, Haye was strangely muted.

The irony is that Haye wore Klitschko's biggest shots well. One right hand, in the fifth round, would have toppled a traction engine. But Haye did what he did in winning his WBA title against Nikolay Valuev in 2009: he kept his distance, remained watchful and fought in fits and starts. Which was never going to be enough against Klitschko.

Defeat for Haye is not as calamitous as it would have been for Klitschko. Had Klitschko lost, he would have been written off as the ultimate flat-track bully, a man who built his reputation on the foundations of chancers and bums.

Harsher critics will claim the Klitschko fight was a defining one for Haye, a bout that revealed the Londoner as a fraudulent braggart. But, lest we forget, Haye is a former undisputed cruiserweight champion, which is something to be intensely proud of - and, as Klitschko conceded, stepping up to challenge the big men at least "takes balls".

There are those who believed regime change in the heavyweight division would have been a good thing, that the fast-talking, swaggering Haye was exactly what boxing needed. But such talk seems vacuous now.

Klitschko outclassed Haye in every department - technically, physically, up on the dais before and after the fight. If every era gets the heavyweight champion it deserves, then we could do a lot worse than a multi-lingual doctor and humanitarian campaigner - and a pretty formidable fighter, to boot.

It is difficult to see what options Haye has left. Wladimir took much pleasure in informing him a rematch was out of the question, while Vitali was surely only ever a realistic possibility if Haye had won.

Haye has repeatedly vowed to retire before his 31st birthday in October, and that seems like the most sensible plan. But as anyone who watched the pre-fight show on Saturday is entitled to ask, having been treated to Vitali and Foreman slumped in deckchairs and reading newspapers on Hamburg docks, when was boxing ever sensible?

Some of those fans who had to slog their way back into central Hamburg in the early hours of Sunday morning might not care if Haye ever fights again, and I cannot really blame them. But you get the feeling he does not want to go out as a boy, he would rather be a man again.