Saturday's meeting between David Haye and Wladimir Klitschko is arguably the first heavyweight contest of any real significance since Lennox Lewis beat Wladimir's big brother, Vitali, in 2003. But compared to blockbusters of yesteryear, it is a minor play.

BBC Sport brings you 10 heavyweight contests that shook up the world - race riots, boxing as an allegory for world war, 'phantom punches', assassination plots, African dictators, a man who eats ears - and Frank Sinatra taking snaps! The heavyweight scene sure ain't what it used to be...

John L Sullivan was the last man to defend the world heavyweight title using bare knuckles, and the first man to lose it wearing gloves. Therefore, he is sometimes considered to be the fighter who transformed boxing from a borderline criminal activity to a (semi) legitimate, (partially) regulated and respectable (to some) 'sport'.

'Gentleman' Jim Corbett, for his part, is thought by many to be the prototype of the modern heavyweight: taught by a coach rather than the code of the street, the San Franciscan fought behind his jab, often on the back foot, and pitted technique against the prevalent crouch and rush style of the day.

The 'Boston Strong Boy' had not defended his crown for four years when the two came face to face at the 10,000-capacity Olympic Club in New Orleans - and it showed. Corbett led Sullivan a merry dance for 21 rounds before, "with all the dynamite Nature had given me", landing the decisive blow. "If I had to get licked," said Sullivan when he finally made it back to his feet, "I'm glad I was licked by an American." 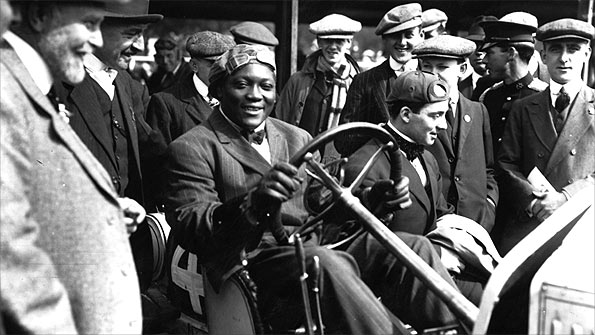 Johnson flouted many of the accepted norms of the time, infuriating the white population. Photo: Getty

In 1908, Johnson had won the world heavyweight crown from Tommy Burns, in Sydney, to the horror of the American public, who could not countenance the idea of a black man being in possession of the sport's biggest prize.

Jeffries turned out to be an enthusiastic flagbearer for the white supremacists - which, in those days, represented most of the white population - and lost 100lb. However, Johnson, a new marque of boxer altogether, was too quick and too slick and defeated Jeffries inside 15 rounds. Rioting followed across the United States, leaving many dead.

Tunney was a clean-living ex-Marine with an interest in books, while Dempsey was a brawling draft-dodger who led a hellraising existence. It was a classic match-up and 120,000 packed into Philadelphia's Sesquicentennial Stadium to see the 'Manassa Mauler' defend his title for the first time in three years.

The unfancied 'Fighting Marine' gave the champion a boxing lesson on his way to a unanimous 10-round decision, and the fight is sometimes cited as a great leap forward for boxing technique; at the time, sluggers such as Demspey were very much de rigeur, and Tunney is regarded by many as a godfather of modern, scientific boxing.

Tunney won the rematch a year later (famous for the 'Long Count') and retired from the ring as champion, while Dempsey also had the strength of character to walk away.

Braddock was a 29-year-old father of three, just scraping by in Depression-era New York when he got his shot at the big time against playboy world champion Baer.

Braddock had 22 losses going into the fight, whereas the talented but profligate Baer was so confident of victory he did most of his training in the bar. As it turned out, a dogged Braddock outboxed and outgamed the posturing Baer and was declared the winner by unanimous decision before a euphoric crowd of 35,000.

Braddock, dubbed the 'Cinderella Man' by writer Damon Runyon, clung to his crown for two years before the great Joe Louis destroyed him in 1937. But his rags-to-riches story proved an inspiration for millions of Americans in that uncertain age.

While the social and political implications of the Jeffries-Johnson fight shook the United States to the core, Louis-Schmeling sent shockwaves around the world, and was one of the most important sporting events of the 20th century. 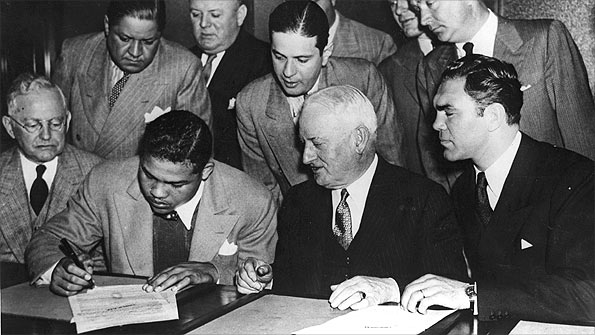 The fight between Louis (left) and Schmeling was about much more than sport. Photo: Getty

In 1936, Germany's former world champion Schmeling knocked out the unbeaten Louis in 12 rounds. However, the following year Louis became the first black man to win the world heavyweight title since Johnson, before defending three times and signing up for a rematch with the only man to beat him.

This being the eve of the Second World War, Schmeling was portrayed by Adolf Hitler as an exemplar of Aryan supremacy. President Roosevelt, meanwhile, hoped Louis would reflect the unwavering vigour of the United States.

Seventy-thousand packed into Yankee Stadium to see Louis destroy Schmeling in less than a round - rarely can a crowd have been so happy to see a fight over so quickly.

When Cassius Clay won the world heavyweight crown from the formidable Liston in 1964, it was one of the biggest upsets in boxing history. The rematch the following year swirled with conspiracy and intrigue.

The week after becoming heavyweight king, Clay, who was a member of the radical Nation of Islam, announced he had changed his name to Muhammad Ali. In a sure sign the United States was still riven by racial and religious suspicion, mainstream society was appalled. There were even rumours both fighters might be the target of assassination attempts.

Midway through the first round in the tiny arena in Maine, Liston hit the deck - the only problem being, he did not appear to have been hit. 'Phantom Punch' or not, Liston was counted out amid scenes of wild confusion.

We still do not know if Liston, who was in hock to the Mafia, took a dive. Liston would later claim it was the Nation of Islam extremists he feared, which is why he wanted out as early as possible. Forty-six years on, the questions remain.

Billed as 'The Fight of the Century', Ali-Frazier I was the first time two undefeated heavyweight world champions had met in the ring. But it was about much more than that, brimming as it was with social symbolism.

Ali refused induction into the US army in 1967 and was subsequently stripped of his title and slapped with a ban. In exile, Ali became a symbol of the anti-establishment movement, while the no-frills, plodding Frazier, who had won the title earlier that year, was emblematic of President Nixon's 'Silent Majority'. 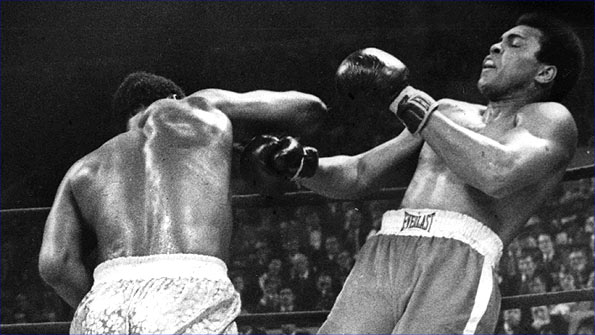 Frazier (left) had too much hustle for Ali down the stretch at Madison Square Garden. Photo: Getty

Hollywood great Burt Lancaster was the colour commentator for the closed-circuit broadcast, while Frank Sinatra and Norman Mailer were photographer and writer respectively for Life magazine. Sport did not get any bigger than this.

After a confident start by Ali, Frazier took control in the middle rounds, and in round 15, Ali was floored by a savage left hook. Ali was up in an instant - but Frazier knew the fight was won.

In 1973, Foreman demolished Frazier in two rounds to become undisputed world heavyweight champion, and the former Olympic champion was seen as Liston reincarnate, and one of the biggest punchers in the history of the game.

The Ali-Foreman fight was one of Don King's earliest forays into boxing promotion. King being King, it ended up being staged in the African dictatorship of Zaire (now the Democratic Republic of the Congo), where the sinister President Mobutu held sway.

Ali was given little chance, but the 32-year-old pulled off perhaps an even bigger upset than his victory against Liston 10 years earlier. Seven years after being stripped of his title, Ali had proved he was 'The Greatest' all over again.

One Las Vegas bookmaker made Douglas a 42-1 shot to dethrone the seemingly invincible Tyson, which tells you everything you need to know about just how big a shock the outcome of this fight was.

In the build-up to the bout, Douglas's wife left him and his mother died of a heart attack. But the tragedy and heartache only served to inspire him. Meanwhile, Tyson had been
diminished by drink, drugs, disease and myriad mental demons. Douglas laid Tyson's frailties bare, recovering from an eighth-round knockdown to spark Tyson in the 10th.

What some consider the heavyweight division's 'last great fight' gutted both its protagonists. Tyson, his aura shattered, was never the same fighter again, while a de-motivated Douglas lost his title to Evander Holyfield eight months later.

While boxing had come a long way from the semi-criminal activity practised in John L Sullivan's heyday, it had never completely shrugged off its cloak of immorality. After Holyfield-Tyson II, some would question its legitimacy as a sport all over again.

Seven months earlier, Holyfield stopped Tyson, who had served three years for rape between 1992-95, in the 11th round to reclaim the world heavyweight crown. Tyson's team, not for the first time, had underestimated an opponent, considering the 34-year-old Holyfield to be an over-the-hill fighter.

Holyfield repeatedly used his head as a weapon in that first match, and it has been suggested Tyson's revenge was pre-planned. Regardless, it was despicable when it came. In round three, Tyson bit off a piece of the champion's ear and spat it onto the canvas, leaving referee Mills Lane with no choice but to disqualify him.

Tyson, once considered the glorious saviour of boxing, was now the snarling, ranting mascot of the anti-boxing lobby.

Britain's Lennox Lewis is widely regarded as heavyweight boxing's last great champion, but in truth, the division has rarely hit the heights since that nauseating episode.

As well as my blogs, you can follow me when I'm out and about - or on the sofa - at https://twitter.com/bendirs1