Adam Booth is telling me he doesn't care what anyone thinks of him. I'm no Freud, but I can tell he cares. It's the bulge of his eyes. And the talk of fear and hatred.

"From day one I've only ever done what I think is right and not what other people wanted me to do," Booth, trainer and manager of David Haye, who fights Wladimir Klitschko in Hamburg on Saturday, tells BBC Sport.

"When I first started out as a trainer, one manager said I was only licensed to carry a spit bucket. But what happened back then gave me the steeliness and the determination to do what I have to do and make the decisions I have to make.

"I don't have to follow in the footsteps of the boxing establishment and bow to the way they did things. I never had to, because David put his trust in me from day one." 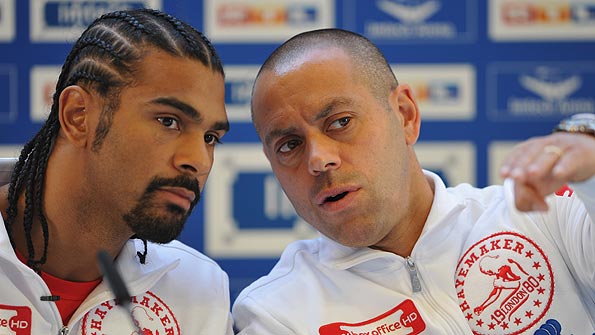 David Haye and Adam Booth at a press conference for the fight against Wladimir Klitschko. Photo: Getty Images

Trust. Not a word immediately associated with the sport of boxing. Which is perhaps why so much goes wrong in so many different ways to so many of its practitioners. And why, for Booth and Haye, things have turned out so rosy.

"Trust is everything," says Booth, switching seamlessly from life coach to what sounds suspiciously like a marriage counsellor. "Any relationship - whether it be a working relationship, a romantic relationship - it has to be based on trust, understanding and compromise. Especially in a business like this. Trust is built up over time and can be broken in a moment - forever."

Booth makes the boxing business sound like the last days of the Third Reich. The trust between trainer and fighter, he says, was forged on the anvil of "hatred, fear and nervousness". And true enough, from the day he met Haye at Fitzroy Lodge Amateur Boxing Club in south London in 1996, it has been them against the world.

"The amount of decisions I've had to make along the way - contractual, governing bodies, title fights, challenges, sparring sessions, 'yes, no, do this, don't do that'. A couple haven't been the right ones, but the majority have worked out. At the end of it all, I'm going to stand there and say, 'yeh, I meant it all, I'm a genius'. But I don't have that kind of foresight, I've just made my decisions as I've gone along.

"The things I've done and seen, the decisions I've made and the people I've hacked off in this business, it makes me put my head in my hands sometimes and think 'how the hell did I get way with that?' I got away with it because David won, and that's the long and the short of it."

Booth's announcement that he is fuelled by "hatred, fear and nervousness" is at odds with his Yogi-like demeanour in the ring. But if you want him to do Yogi-like out of the ring, too, he will gladly oblige.

"Certain fighting styles and fighters are like a tornado," he says, "whereby they create destruction all around them. But if you look at the centre of a tornado, you could drop a feather into it and it would flutter gently to the ground.

"Good fighters are like that, they have that centre of calmness about them. If, when a fighter gets back to his stool at the end of a round, you're bombarding him with instructions, all you're doing is stopping the centre of that tornado being calm."

If Booth does not sound like your stereotypical boxing trainer, in the Burgess Meredith mould, it is because he is anything but. While he has a boxing pedigree - he won 40 of 48 amateur fights - the one-time lecturer in anatomy and physiology is also lucid and erudite. His detractors have been quick to pick up on the latter while glossing over the former. To many in boxing, different automatically means wrong.

"My coaching credentials have been called into question ever since David turned professional [in 2002]," says Booth. "I remember when David fought Jean-Marc Mormeck [for the WBC and WBA cruiserweight belts in 2007], I had a row in the rules meeting with his trainer Richie Giachetti, who trained Mike Tyson and Larry Holmes, among many others.

"We raised seven points and we came away from the meeting with seven points in our favour. In the lift afterwards, Giachetti patted me on the shoulder and said 'don't worry, son, one day you'll learn how this business works'."

Not a lot changed in the intervening four years. Last month, James DeGale labelled Booth a "glorified Fitness First coach". Days later, Booth's charge George Groves, fighting a supreme tactical fight, inflicted a first defeat on DeGale and nicked his British super-middleweight belt. And then, almost overnight, Booth was transformed into some kind of boxing guru in the British press.

"I'm a bit superstitious, so don't start lording me up, because then there's more chance of David losing," says Booth, feeling around for some wood to touch. "When they run out of talk about the fighters they start talking about the trainers and now, especially after George's win, it happens to be my time."

Yet, despite Booth's assertion that trainers are a mere "sideshow" and that "the sport is all about the boxers", it is when talk turns to boxing philosophy and strategy that he really comes alive. "People still don't know what we do," says Booth. "You can never be a complete fighter and you can never know enough. That's why it's so fascinating.

"I'm a coach because I can't fight, but I coach because I love boxing. I've got my philosophies, and if your fighters believe in what you know, in what you coach them, and they go out there and do it and it helps them achieve success, then it is massive satisfaction.

"I'm just fortunate that I met David when he was a young kid. It's been one hell of a journey to get to this point and the Wladimir Klitschko fight is the pinnacle of this journey - we can't go any higher." It sounds like the tagline of some Hollywood 'bromance': 'Trust conquers fear and hatred in the dirtiest sport of all'.

As well as my blogs, you can follow me when I'm out and about - or on the sofa - at https://twitter.com/bendirs1