"Seriously, I could captain this side." It is the sporting equivalent of staring up at a painting in a modern art gallery and stating: "My kid could do better than that". Or taking a sip of wine in an expensive restaurant and muttering: "Yeah, suppose it's alright".

They popped up in pubs and bars and on sofas, throwing their hat into the ring every time an Aussie batsman passed 100 in an Ashes Test, every time an English partnership had seen off the seamers and the ball was tossed to Shane Warne. No doubt I said it a few times myself: "Seriously, I could captain this side."

It is, of course, a vacuous statement - but not without a smidgeon of truth.

It can quite easily be argued that Australia had in its team that humiliated England 5-0 in the last Ashes series down under more bona fide greats than England has produced in the last 30 or 40 years. When the actual captain Ricky Ponting called it "arguably the best team in any sport in the world", he was not guilty of hyperbole. 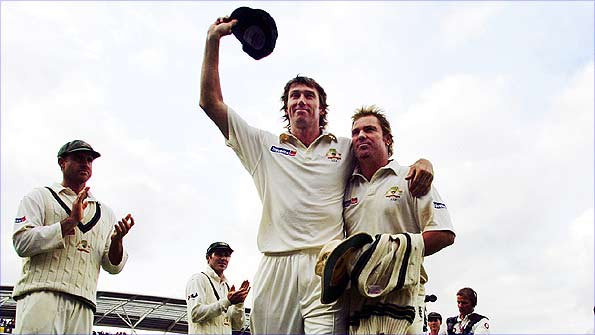 Australia dominated cricket when Glenn McGrath and Shane Warne were in the side - photo: Getty

Warne and Adam Gilchrist would be shoo-ins for any all-time side, while Ponting and Glenn McGrath would certainly be in the reckoning. Add a legendary opening partnership in Matthew Hayden and Justin Langer, Mike Hussey and Michael Clarke in the middle order and quicks Brett Lee and Stuart Clark and you have a juggernaut of an outfit.

With such weapons at his disposal for his first few years as skipper, Ponting, who replaced Steve Waugh in 2004, was given something of an armchair ride, winning 27 of his first 35 matches in charge. After that, however, Ponting's armchair started losing springs.

In the space of a couple of years Warne, McGrath, Langer, Gilchrist, Hayden and Lee all called it a day, as did lesser lights such as Stuart MacGill and Damien Martyn. And just like that, Ponting went from a skipper in charge of a great team with the best winning percentage in Test history to, well, a skipper with a pretty good record in charge of a pretty good team.

"Let's be honest, Ricky's had some wonderful players at his fingertips," says Mike Gatting, the last man to lead England to Ashes glory in Australia, in 1986-87. "And a captain can only be as good as his players, to be perfectly honest.

"If you've got a Warne and a McGrath in your side you don't have to tell them what to do because they are very good professionals who love winning and want their country to win. You shouldn't have to do too much to get them worked up. The same with Gilchrist, Langer and Hayden."

There are many in Australia - former fast bowlers Geoff Lawson and Jeff Thomson have been merciless in their criticism - who believe 35-year-old Ponting has been unmasked as a poor captain and that he should have been replaced by Clarke following the 2-0 series defeat in India, which made it three Test defeats on the spin, something that hadn't happened to Australia since 1988.

But former skipper Ian Chappell, who won 50% of his Tests to Ponting's current record of 64%, is not one of them, believing the punchy Tasmanian remains the best man for the job.

"Ricky Ponting is a good captain," says Chappell. "It shouldn't come as any surprise that when you lose Warne and McGrath, Ponting isn't winning as often as he was. But Ponting can point to the fact he wins 64% of his Tests overall and say it works.

"And I've not seen a day's play with Australia where I've looked out there and felt the team hasn't been pulling as one - I've never seen that happen under Ricky Ponting's captaincy. The day that happens is the day you know you've got a problem and that's when you've got to go."

However, there are many who disagree with Chappell and argue that statistics are not the best way to measure a captain - the same people would argue that former New Zealand skipper Stephen Fleming and former England skipper Michael Vaughan were vastly superior to Ponting, not because of their winning percentages, but because of the manner in which they marshalled inferior sides and got them punching above their weight. 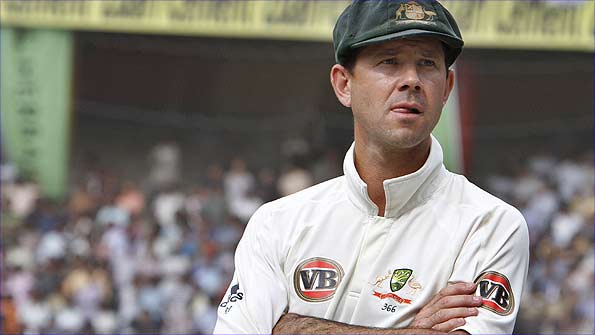 Ponting's frailties were there for all to see during the 2005 Ashes series, when he was knocked out of his groove by an injury to McGrath, the lack of form of some of his key players and the in-your-face aggression of Vaughan's England outfit.

One of the biggest mysteries of that series was Ponting's decision not to pick MacGill, a man who finished his career with 208 Test wickets at an average of 29, for the final two Tests when his fellow leg-spinner Warne was scalping England batsmen for fun. Fast bowler Shaun Tait, preferred to MacGill at Trent Bridge and The Oval, was then mysteriously underused.

Then, in Cardiff in 2009, with England nine wickets down in their second innings and Monty Panesar and James Anderson in the middle, Ponting made the truly baffling decision to bring on part-timer Marcus North to bowl two of the last four overs, with fellow spinner Nathan Hauritz operating from the other end. Panesar and Anderson held firm, Ponting appeared haunted at not being able to force the win and England went on to reclaim the Ashes.

During the recent Test series in India, Ponting took a lot of flak in Australia's media for negative fields, a lack of faith in his players and a tendency to flinch in the heat of battle, a most un-Australian trait. When Warne criticised Hauritz's field placings during the second Test in Bangalore, Ponting's reaction, proclaiming poor old Hauritz had chosen them himself, seemed indicative of a lack of leadership skills.

Australian fans declare themselves baffled at why a batsman of such attacking verve and pugnacity and so steeped in the traditions of the game should prove to be so devoid of tactical nous and composure when things get uncomfortable.

There won't be too many people putting their hand up to replace Ponting if he becomes the first Australian captain to lose three Ashes series since Billy Murdoch in 1890. But you might hear a lot of people saying: "Seriously, who'd want to captain this side?"

As well as my blogs, you can follow me when I'm out, as well as when I'm about, at https://twitter.com/bendirs1