If Audley Harrison loses to David Haye on Saturday he could do worse than setting himself up as some sort of mystic guru, receiving visitors on a Californian hilltop, administering medicine for the mind: "Yes, my child, you can."

For all the false dawns, all the unfulfilled promises, all the evidence which suggests - nay, screams - the 39-year-old has no chance of dethroning WBA heavyweight champion Haye in Manchester, there are those Harrison has managed to convince. Or so he would have us believe.

"Anyone who knows boxing, they all say it's an even-money fight," Harrison told BBC Sport. But closer inspection of the raft of predictions, from fair-weather fans to former fighters, reveals very few are saying anything of the sort: stating, as Lennox Lewis, Mike Tyson and Evander Holyfield effectively have, that Harrison has a "puncher's chance" is not the same as saying they think he is going to prevail.


Harrison believes his size will give him the edge over Haye

And those fans Harrison has apparently managed to convert were in short supply at Friday's weigh-in, where the former Olympic champion was greeted with half-hearted cheers and much booing while his erstwhile friend was given a rapturous reception.

But this is Harrison's genius: a man who revels in riddles, by convincing himself others are convinced by him, he manages to convince himself. And make no mistake, he really is convinced. Just as he was convinced before he lost to Danny Williams in 2005, Dominick Guinn in 2006, Michael Sprott in 2007 and Martin Rogan in 2008.

"He truly believes everything that's happened before has happened for this one night," Haye told BBC Sport. "All the setbacks, the nights in hospital after getting knocked out, this is what it's all been about. I find it quite amusing."

In truth, the normally phlegmatic Haye has appeared more irritated than amused at times, causing him to make some rather ill-advised public statements. And no doubt Harrison hopes Haye's annoyance will spill over in the ring, causing him to lose his discipline and leave himself open to Harrison's counters and, what is admittedly, a pretty decent left hand.

"I can punch and I've got the pedigree, the right team who have taught me the fundamentals of the ring," says Harrison. "David Haye is brawn over brain, he's a brawler, he likes to mix it, and you're going to see why it's called the sweet science on Saturday." But Harrison's theory has more holes in it than a rusty spit bucket.

First, Haye demonstrated against Nikolay Valuev in winning the WBA belt last November that he can be anything but a brawler if need be and that he and trainer Adam Booth are able to implement and stick to a winning game-plan. Second, Harrison has done little in the 10 years since winning Olympic gold to suggest he is anything like a scientist in the ring.

There are those who claim Harrison has 'the tools' to be a top-class operator - the height, the reach, a concussive left hand - but what use are 'the tools' when they spend most of the time rusting away in the shed?

And for all Harrison's talk of possessing an "unbreakable will", Haye is well within his rights to wonder aloud where it was hiding, for example, during his defeat by Rogan, the Belfast taxi driver who ground Harrison into dust down the stretch. 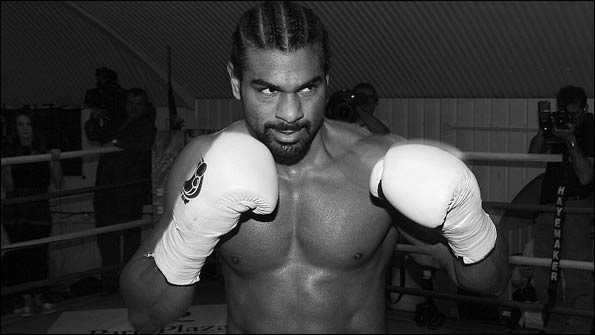 Haye says he will knock out Harrison in the first six rounds Photo: Getty

Harrison is correct to point out that when Haye does decide to mix it he is not the most elusive - Mike Tyson, whose head movement was a major strength when he was at his peak, was not the first to highlight that Haye does not move his head enough. What he forgets is that Haye has been in sticky situations before, and usually managed to extricate himself.

True, Haye bit off more than he could chew against the granite Carl Thompson back in 2004, blowing himself out before losing in five rounds, but that was only his 11th pro fight and he has demonstrated plenty of character since then.

Floored by Jean Marc Mormeck when challenging for the Frenchman's WBC cruiserweight crown in Paris in 2007, Haye got up and stopped the champion three rounds later. Haye also went over against Monte Barrett in 2008 before knocking the American bandy in the same round. And in his most recent bout against John Ruiz he was cut and deducted a point in the first only to put the former two-time world champion down four times on his way to a brutal ninth-round stoppage.

That the challenger has resorted to dredging up defeats from Haye's amateur days tells its own story. And it matters not a jot if Haye's sparring partner Tony Thompson put him down in training, as Harrison has claimed: Thompson went 11 rounds with Wladimir Klitschko only two years ago and many would say he is more worthy of another world title shot than Harrison.

Admittedly, Harrison looked lean and mean on the scales, while still weighing in three stone heavier than Haye, who has gambled it all on speed. But Harrison always looks lean and mean beforehand, it's when the first bell sounds there's a problem.

In my last blog I said this is a fight that makes perfect sense. It does, but that is not the same as saying it will be a decent fight. Harrison's mind games might work on himself, but I get the feeling Haye, like almost everyone else, is not entirely convinced.

As well as my blogs, you can follow me when I'm out, as well as when I'm about, at https://twitter.com/bendirs1