"Oh Evander," says Holyfield, screwing up his face and pretending to cry as he imitates his concerned fans, "we love you! Why you still fighting? Do you really want to get beat up? You're such a nice guy!"

The truth is more brutal than that. The truth is most people are less concerned about his well-being than they are about the well-being of boxing. The truth is people used to love him but now he has become an embarrassment to the sport. Mention Evander Holyfield and people laugh or they wince or they refuse to believe he is still fighting.

"It's not so much about proving people wrong," explained Holyfield, in London to promote an open air poker festival in Leicester Square. But Holyfield, 48 in October, has been proving people wrong all his life - people who told him "you ain't gonna do this and you ain't gonna do that" - and whether he wants to admit it or not, it's what defines him. 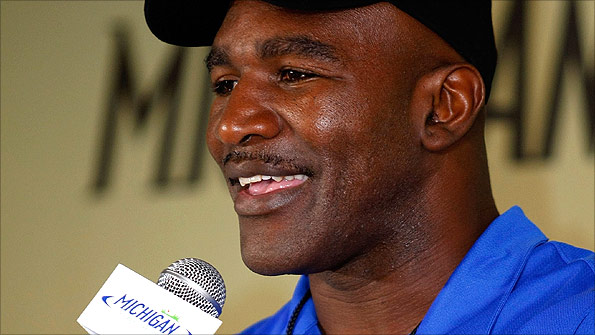 Born the youngest of eight children to a single mother living in the dirt-poor Deep South, Holyfield came into the world an underdog and continued to be one, whether he was having to knock out white fighters as an amateur to make sure of getting a result or coming from obscurity to secure a spot at the Los Angeles Olympics.

Things didn't change when he joined the professional ranks, even after he became the 'The Real Deal': he was the underdog when he won the undisputed cruiserweight crown from Dwight Muhammad Qawi (what Holyfield calls his toughest fight); the underdog three times against Riddick Bowe; the underdog twice against Mike Tyson; the underdog twice more against Lennox Lewis. He won some, he lost some, but in Holyfield's world "setbacks pave the way for comebacks" - and besides, "Momma told me never to quit".

Holyfield told me the story of the first time he met Tyson between the ropes, 12 years before their first world title fight in 1996 and the abomination that followed, when 'The Baddest Man on the Planet' turned grisly gourmand and made a meal of his rival's ears.

"Every time Mike sparred he tried to kill people and his trainer warned me, 'you sure you want to do this Evander? Mike hit real hard'. We got in the ring, he tried to do all that stuff and I pinned him in the corner. They all knew then that it makes no difference how big you are, I'll go toe-to-toe with you. From that point on, Mike knew I'd look him in the eye and say, 'OK, let's go.'" 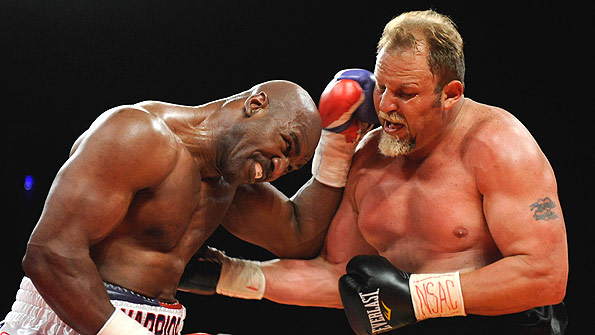 Abandoned by trainer after trainer - the venerable Ronnie Shields, who left in 2007, said a fight against either Klitschko brother could be "deadly" - Holyfield stands alone in thinking he knows best and everyone else is wrong. And when he has his doubts, God apparently tells him to keep on chugging.

Holyfield tells the story in his autobiography of the time in December 2004, shortly after a painful defeat by Larry Donald, his third on the spin, a 'prophet' from Texas called Dale Gentry predicted he would make a "major comeback". "I'd been written off by the boxing world," writes Holyfield, "and Gentry's prediction made no sense to anybody. Except me."

In part, Holyfield's delusion is fed by the pitiful state of the heavyweight division. He admitted he might not be fighting today were there big men of the calibre of Bowe, Tyson and Lewis still boxing.

But when you consider how close he came to reclaiming a portion of the heavyweight crown against Nikolay Valuev in 2008, a year before Britain's David Haye wrested the WBA title from the giant Russian, you can at least begin to understand his reasoning. Problem is, even if he had beaten Valuev, Holyfield would not have been sated.

"If they had given me the belt I should have got when I fought Lennox Lewis in 1999 in Vegas [Lewis won via a unanimous decision], I would have quit because my goal was to become undisputed heavyweight champion of the world," said Holyfield.

"It's not so much I look at the division and think it's weak, I just ain't reached my goal. I told everyone when I lost the title against Riddick Bowe in 1992, 'I'm gonna come back' - I made a commitment."

When Holyfield takes me through the parts of his body still in good working order - his shoulders, his knees, the heart which gave out during his first fight with Michael Moorer as far back as 1994 - at no stage does he point to his head.

As former super-middleweight world champion Richie Woodhall once told me, a fighter's head is like a walnut: it might take some cracking at first but it's time to get out once the fissures start appearing. Yet Holyfield, it appears, is going nowhere.

In Detroit in November, he will fight a 38-year-old American called Sherman Williams, having defeated a 40-year-old South African called Francois Botha in April. As Holyfield likes to tell us, it's his choice. For that reason, I don't much feel sorry for him. It's the sport of boxing we should all feel sorry for.