"Don't care who wins this fight just that it ends in a brutal KO. If it's Haye on the deck he'll deserve to be for fighting this bum. If Harrison ends up on the deck at least it will shut him up forever." ChrisBarnes on the 606 boxing messageboard

In June 1939 the great Joe Louis defended his world heavyweight crown against a fighter called 'Two Ton' Tony Galento, a man who trained on cigars, meatballs and grog and who was described by one reporter as looking like an "ambulatory beer barrel". Although presumably not to his face.

A crude, vicious brawler, in and out of the ring, the 5ft 9in, 230lb Galento wrestled an octopus, boxed a bear and once, for a bet, consumed 52 hot dogs directly before a fight, prior to knocking his opponent bandy. A character, certainly, but a character described by another contemporary sports writer as an "uncouth, unfunny, unskilled, unethical, and unspeakable braggart".

For the record, the near-bald, generously-girthed Galento, of whom former heavyweight world champion and sworn enemy Max Baer said "his appearance alone is a detriment to boxing", managed to floor Louis in the third but was stopped in the following round. 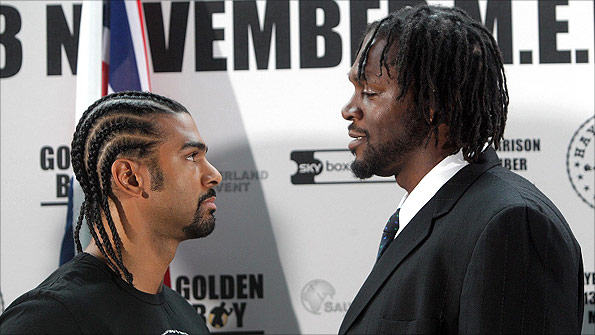 The unlikely Galento sprang to mind as I perused the 606 boxing messageboard following the announcement of David Haye's world title defence against fellow Londoner Audley Harrison, for an awful lot of people seem to be of the opinion that the 13 November bout represents boxing's ground zero. That's the thing about some boxing fans, they romanticise the past but manage to combine their romanticism with short, or selective, memories.

Were British boxing fans as dismayed, I wondered, when Yorkshire's Richard Dunn challenged Muhammad Ali for the world heavyweight crown back in 1976? Not according to BBC 5 live commentator Mike Costello, who recalls everyone saying "what a wonderful opportunity" it was for Dunn because he was "likeable, cuddly and got on well with the media".

While Dunn was likeable and cuddly, Harrison is difficult to warm to and has for some time now been a figure of fun. However, just like Dunn when he fought Ali, Harrison is at least a European champion (although he has since vacated the title), and surely that still counts for something.

Even Haye is saying former Olympic champion Harrison is undeserving of a shot at his WBA heavyweight crown, but Haye knows his history and is fully aware that boxing has always been a business first and foremost, and never a truly meritocratic one.

Which is why Charley Burley - said to be too cagey for most promoters' tastes and so slick even Sugar Ray Robinson didn't want a piece of him - never fought for a world title and Galento - mafia-connected and nasty, but a New York folk hero who could have filled Yankee Stadium twice over - did.

One 606 contributor perfectly summed up the ambivalence towards the Haye-Harrison match when he wrote: "Oh dear, the heavyweight division has sunk to a new low! I will be intrigued to see it though." So disgusted he won't be able to keep himself from watching, and millions more will feel the same.

So perverse is boxing that it is perhaps the only sport whose fans will pay good money specifically to see someone lose. For that reason plenty of people will be shelling out for tickets or pay-per-view - either to see Harrison, who they deem to be unworthy of a shot, hammered, or Haye, who they feel has demeaned boxing by handing Harrison a shot, humiliated. It could be boos all round - but they'll still be watching.

Haye's mistake, if indeed he made one, was to make promises he couldn't be sure of keeping. "I'd like to fight who the fans want me to fight," he said after his first world title defence against John Ruiz in April. They wanted him to fight one of the Klitschko brothers and they've been served up Harrison instead.

Only those within the Haye and Klitschko camps know for sure why negotiations foundered and why a unification fight is yet to be made. But it is quite conceivable the Englishman simply realised he was being too hasty, that the Klitschkos could wait and that far easier money could be made. And bundles of it.

Far more than could have been made against Tomasz Adamek or Alexander Povetkin or Denis Boytsov - and if you're wondering who they are, well that's exactly my point.

With Haye driving the hype machine and the increasingly eccentric Harrison ably supporting, the next two months should be plenty of fun. The press will lap it up, the public will too and, whatever the naysayers may say, Manchester's MEN Arena will be jumping when the day of reckoning comes.

Whether the fight lives up to the hype is almost incidental. Hype is integral to boxing like it is to no other sport - not an add-on, rather an essential part of the package - so that if the fight is a let down, you can at least savour what came before it.

And to those who find it vulgar and unseemly, I would argue it has always been the case - stretching right back to Bob Fitzsimmons, who once threatened to "kill an opponent stone dead", through to Ali, who delighted in belittling Joe Frazier, labelling his rival a gorilla and an Uncle Tom, through to Haye, a modern master of what he likes to call 'smack'.

'Undeserving' title challengers, broken promises, outraged fans over-romanticising the past, trash-talk by the barrow-load, all part of the business of boxing - just as it always has been and just as it always will be.