Cook for the chop?

BBC Sport at The Oval

When it comes to Alastair Cook, the England selectors only need to ask themselves one question: would the Australians like to see him walking out to bat on the first morning of the first Ashes Test in Brisbane on 25 November? Of course they would - they'd love it.

Which is why England must drop the Essex opener for the fourth and final Test against Pakistan at Lord's next week, certainly if he fails again in his second innings at The Oval.

"We are all confident he will come good," his Essex mentor Graham Gooch told the BBC before this match began, "he is just one score away from getting back to form and the selectors have done exactly the right thing by showing faith."

But while the accepted wisdom seems to be that Cook is simply out of nick, some who have followed his Test career to date will be asking whether he's not merely susceptible against top-class seam bowling.

Cook's average in 10 Tests against Australia, home and away, is 26.21, with one century. And while he averages significantly higher against South Africa, exactly 44, he has just one ton in eight matches against the Proteas and was given a real going over by Dale Steyn and Morne Morkel on a bouncy deck in Johannesburg in January.

Against Mohammads Asif and Amir, arguably the most exacting new ball partnership in world cricket at the moment, Cook has been almost shot-less.

It should also not be forgotten that Cook went into his two previous series against Australia apparently in pretty good touch - he scored two tons and an eighty-odd against the touring Pakistanis before the last tour down under and two tons and three fifties against the West Indies before last year's home series - but that didn't prevent him having a pretty lean time of it against the Aussie attacks.

One of the buzz phrases in cricket is that of "a settled team" and the current England selectors should be commended for standing by players who in the past would have been discarded after a few low scores (Mark Ramprakash springs to mind).

But even the great Australian sides of recent past could be brutal when need be, with both Matthew Hayden and Justin Langer spending extended periods out of the side before returning better players. 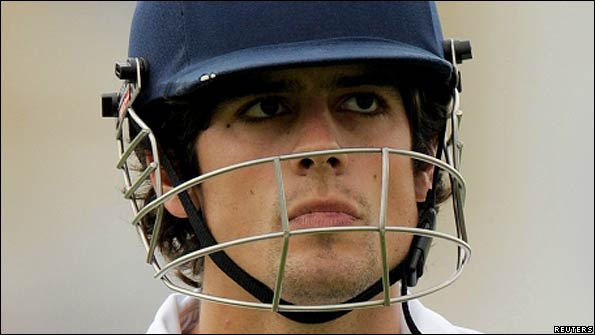 Alastair Cook's poor run of form continues at The Oval

And how settled would England's top order be if Cook is retained for Lord's and fails again? Surely better to take the decision that even a settled side can be improved and cast their eyes over the alternatives now, rather than in the heat of an Ashes battle.

"Everyone in the England team knows he is a good player and will come good at some stage," added Gooch. Unfortunately for Cook, "at some stage" is far too vague a timeframe.

One option would be to recall Hampshire's Michael Carberry, scorer of five centuries in 10 County Championship matches this season. England selector James Whitaker witnessed the 29-year-old score 71 against Somerset last week, and Carberry's selection would send a message that county cricketers aren't toiling in vain, below and beyond an England vacuum.

Carberry apparently thinks his Test career is over after one match (he made 30 and 34 against Bangladesh in Chittagong), opining last week that "that ship has sailed".

The chances are he's right, with England far more likely to move Jonathan Trott up the order and slot Ian Bell, currently recovering from a broken foot, back in at number three if a change is made for the Ashes.

It wouldn't be the perfect fit - the presence in the England line-up of Bell, or 'The Sherminator' as he is known to the Aussie players, and not in a nice way, would be unlikely to give Ricky Ponting and Co sleepless nights.

But at the moment you'd have to fancy him to be more productive than Cook, whose lack of mobility at the crease and fragile state of mind would make him particularly vulnerable against a side which has 'mental disintegration' down to an artform.

On a separate point, I was asked the question "Where are all the Pakistani fans?" by a ticket tout as I came through Oval station this morning. "I haven't seen one all day," he added. The plan was to grab a couple of Pakistan fans and ask them, but the ticket tout wasn't exaggerating.

As the BBC's sports editor David Bond has explained on this website, the first day of an Oval Test match was not a sell-out for the first time since 1986.

In years gone by grounds could count on local ethnic communities - whether England be playing Pakistan, India or West Indies - to boost the numbers, but Test cricket appears to be losing its grip.

So I'm interested to know, if there are any Pakistan fans living in England reading this, why is this the case. Is it because this Pakistan side isn't much cop? Is it the lack of marquee stars (no Imrans, no Shoaibs, no Inzamams)? Is it all about Twenty20 nowadays? Have young Brits of Pakistani descent simply fallen out of love with cricket? Or, at between £46-£85 for a day's play, is it just too damn expensive? Let me know.