Razzmatazz or bust for snooker?

One minute Mark Selby's baulking at the idea of taking snooker players out of waistcoats and dickie bows, the next he's saying he'd be up for entering the arena dressed as a jester. The mere mention of Barry Hearn and all of a sudden the possibilities are endless.

For the sake of the sport's self-respect, let's hope the Masters champion isn't asked to dig out the jingle-belled hat and floppy shoes any time soon. But it is a sign of the enormous belief in snooker's new boss that Selby is willing to entertain doing something quite so daft. As Selby told BBC Sport: "I love the game and I'll do whatever I have to do to."

Hearn, who took over as chairman of the World Professional Billiards and Snooker Association (WPBSA) last December, has been backed to the hilt by a raft of snooker's biggest stars, many of whom had been driven to distraction by the previous regime.

Two-time world champion Mark Williams said Hearn should be allowed to do "whatever he wants", while the sport's biggest draw Ronnie O'Sullivan has spoken of his "blind faith" in the man who pulled off the seemingly impossible and sexed up darts. Meet the new boss, snooker's heavyweights seem to be saying, he's nothing like the old boss. 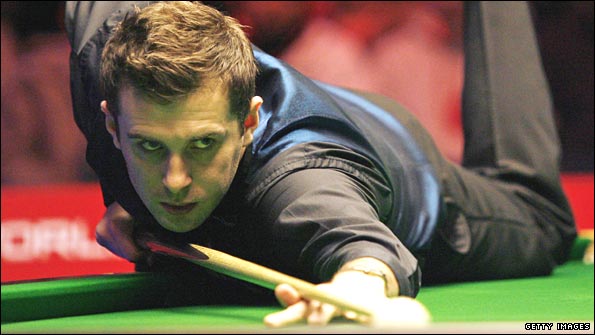 Selby is excited by Hearn's plans for the future

"How he's turned around darts has been fantastic," said Selby, who kicks off his World Snooker Championship on Saturday with a nasty little first-round tie against 1997 champion Ken Doherty. "If you'd have told me seven or eight years ago that darts would be bigger than snooker I'd have laughed at you. But look at it now, it's one of the biggest sports on TV."

There are those, including seven-time world champion Stephen Hendry, who believe going down the darts route would be "a backward step": "If that's what we've got to do," said the Scot last year, "let people in drinking and shouting and bawling, then it's a sad state."

But others believe it's because snooker is in a sad state already - "a downward spiral," according to O'Sullivan - that drastic alterations need to be made.

"Something needs to change, we need to liven it up a bit more," says Selby, whose entrance music at the Crucible will be Underdog by his fellow Leicesterites Kasabian. "If I was paying 20 quid to watch snooker I wouldn't want to just sit there and not be able to talk or do anything, I'd want entertainment and value for money.

"When you pay 20 quid to watch the darts, you walk away and think 'I've really enjoyed it, I've had a great night'. But with snooker at the moment, 70% of the time you're not getting that."

While only 41, Hendry is from a different generation to the 26-year-old Selby, a product of snooker's gilded age. Back when the 'Golden Boy' started his professional career as a pallid, spike-haired teenager in the mid-1980s, playing the game extremely slowly or being somewhat overweight was enough to qualify you as a 'character'. And up to 18 million people used to watch Cannon and Ball, so you really have to wonder what was on the other side.

Some argue Hendry inadvertently lessened snooker's appeal by being so damn good: all of a sudden dressing like Tony Manero from Saturday Night Fever or nutting referees seemed a little bit anachronistic in snooker's super-professional, super-sanitised new age. "Yeh, I know the standard's better than it's ever been," went the refrain, "but what happened to the fat lad who split his trousers? My nan used to like him..."

The truth, as always, is rather more complicated. Type 'snooker club' and 'closed/closes/closure' into Google, and the headlines alone tell the story of the sport's struggle for survival at the grassroots level. And at the elite end, events have dwindled (last year Selby called himself a "part-time professional"), sponsorship has become more difficult to come by (the ban on tobacco advertising hit the sport hard) and prize money has stagnated.

But while snooker's viewing figures have dropped off markedly since their peak in 1985, when 18.5m tuned in at gone midnight to watch Dennis Taylor beat Steve Davis on the final black, they're still pretty robust: when Selby played John Higgins in the World Championship final in 2007, the audience peaked at more than 8m.

Furthermore, an estimated 100m Chinese fans watched Ding Junhui play compatriot Liang Wenbo in last year's first round, so Hearn may be correct in his assertion that "the patient is not dead, it just needs waking up". It could just be that, like a comatose groom on a stag do, snooker comes to its senses in an entirely different country.

"The viewing figures are still great, which tells me it's still popular with the general public," says Selby, the world number seven. "But from what I've experienced over the last two years, in the UK snooker seems to be dying [at the grassroots level], a lot of the clubs are closing down.

"I'd say Europe has overtaken the UK as far as popularity goes. In Europe it's booming, it seems to be the place to be. Whether I'm playing in Russia, Germany or Poland, it's absolutely huge. You get 1-2,000 people watching a pro-am tournament, so God knows how many people you'd get turn up if you had a ranking tournament with the likes of O'Sullivan, Higgins and Hendry."

There will indeed be a ranking event in Berlin next year, while Hearn's other plans include increased prize money and more tournaments, with a 12-event Player Tour Championship culminating in a 24-man Players' Championship and a pro-am World Open, which would replace the existing Grand Prix.

Other proposals include a single-frame, on-the-clock event, a two-week qualifying school (which would do away with the bizarre system whereby players have to qualify for marquee events by travelling to Pontin's holiday camp in Prestatyn - not ideal if you live in Beijing, or anywhere else apart from Prestatyn) and the involvement of other broadcasters besides the BBC.

Players will get to vote on Hearn's blueprint on 5 May, and the noises emanating from the top-ranked players suggest it has every chance of being passed. Reject the proposals and Hearn says he'll resign. It's razzmatazz or bust time for snooker - he's got the Jester's vote, let's hope his colleagues can see past the end of their cues.