Nasa might want to think about doing some tests on John Ruiz, because having had a close-up view of what he went through on Saturday night in Manchester, I'm not convinced there's a harder substance on the planet.

"I could see he wasn't enjoying it," said the victorious David Haye after stopping Ruiz in nine brutal rounds, before realising the absurdity of his comment. Fighters have a habit of making the savage sound positively humdrum, so that Haye might have been talking about a shopping trip round the Arndale. 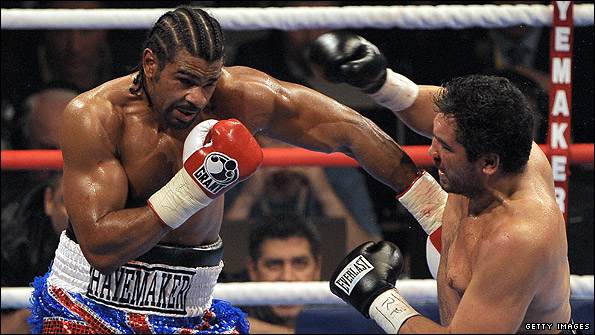 Haye gave a blistering demonstration of his punching power against Ruiz. Photograph: Getty

In defending his WBA heavyweight crown for the first time, Haye did to Ruiz what only one man had done before in 54 fights, namely get him out of there before the final bell had tolled. The last time it happened was 14 years ago, and he's fought plenty of big hitters since then.

When the 38-year-old challenger hit the deck just 25 seconds into the first round, it seemed we'd all be having an early night. But never underestimate the determination of the 'Quiet Man', Ruiz had warned us often enough.

Afterwards, the challenger was clapped into the press room before being clapped out again. In between he clutched an ice-pack to his swollen face, answered questions politely and gave credit to his conqueror. Courageous almost to a fault, the former two-time champion may not be pretty, but he deserves far more than fans' derision.

We already knew Haye packed plenty of power, but against Ruiz he also answered lingering questions about his punch-resistance and stamina - to a certain extent.

The Klitschko brothers are infinitely more skilled, are much, much bigger and they hit far, far harder. But you can only perform against what's put in front of you, and for his part Haye would like us to see the Ruiz fight as a "measuring stick".

"I was taking way too many shots, I like to land my shots and never get hit back," said Haye. "In the middle rounds I took my foot off the gas a bit to regroup, but I knew that if it had gone to 10 or 11 rounds, I could have picked it up again.

"The more of these fights I have the better I'll become. I'm nowhere near the complete article yet. But I'm getting here, I'm on the right road." 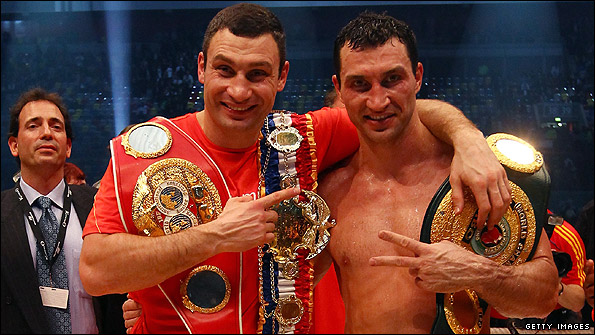 Haye hopes to relieve the Klitschko brothers of their belts and unite the heavyweight division. Photograph: Getty

Where that road might lead remains a mystery, because when Haye defeated Nikolay Valuev to claim the WBA belt last November, there was a rematch clause in the contract. "Sauerland Event [Valuev's promoters] didn't give us the WBA title shot for nothing," explained Haye's trainer and manager Adam Booth.

So when Haye said: "I'd like to fight who the fans want me to fight", what he really meant was, "sorry ladies and gents, I might actually have to run rings round that great big lump for 12 rounds again."

Let's hope sanity prevails and that Valuev is offered some cash to step aside. Haye has blasted a lungful of air into the sport of boxing, but another match against Valuev would send the heavyweight division farting round the room like a fast-deflating balloon.

The Klitschkos will want Haye as much as he wants them, that's for sure. Their adoptive fans in Germany would turn up in their thousands to watch them engage in a food fight, but Vitali and Wladimir have egos too.

Just as Haye talks about leaving a lasting legacy in the sport, Vitali, the WBC title-holder, and Wladimir, owner of the IBF and WBO belts, will know that unless Haye is disposed of, their own legacies will be tarnished. "Who will rid us of this turbulent Englishman?" Not Valuev, not Ruiz, you're going to have to do it yourself, boys.

And just like the 20,000 fans at the MEN Arena, the Klitschkos will be energised by Haye's presence in the division, his brio, his positive vibes. "I provide plenty of excitement," said Haye, "knockdowns, drama, something the heavyweight division hasn't had for a while." I wholeheartedly agree. Were you not entertained?

As well as my blogs, you can follow me when I'm out and about in Manchester at https://twitter.com/bendirs1