Haye does what he has to do

Against Nikolay Valuev, David Haye did what he had to do. No frills, no showboating, no flights of unnecessary machismo. He hit, he moved, he hit, he moved - all the way to the world heavyweight crown.

As the great Evander Holyfield said beforehand, the perfect tactics against the 7ft Russian lead to a "boring fight". Call it boring, call it boxing at its purest.

"He had his game-plan and he executed it to perfection," said Valuev's co-promoter Don King after watching the fight. "He did what he had to do, and he did it brilliantly."

"I had to find a strategy to beat him, and I did," said Haye, who revealed he had damaged his right hand early on in the fight. "I hit him more times than he hit me." 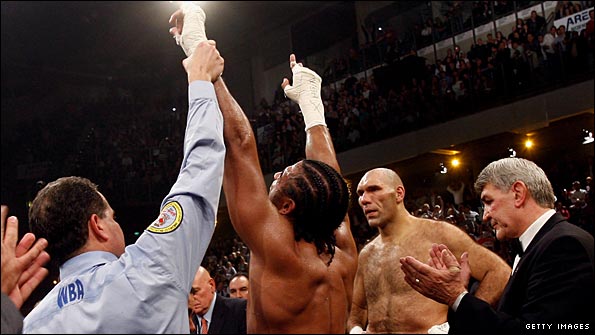 Why would Haye have fought any other way? Seven stones lighter, nine inches shorter, only a madman chooses to stand in front of a giant like Valuev and trade - a madman, and most likely a loser.

Who decided a boxer shouldn't be allowed to win a fight on the back foot? Who said simply walking forwards wins you rounds? As Haye's trainer Adam Booth pointed out, "if you land two punches in the round and don't get hit once, it's you who wins the round", whether you're backpedalling or not.

With a partisan crowd behind him at the Nuremberg Arena, Haye must have been sorely tempted to let rip. While at times it felt like I was watching a spot of Flyball at Crufts - German boxing crowds are a rather refined bunch - when the Brits in the crowd got going, Haye must have felt he was going at it at The Den.

But he remembered what he had to do and stuck to his game-plan. Mercifully, he had more than enough juice to keep chugging down the stretch, which surprised a great many.

If it's excitement you want, you should stick around. Former two-time world champion John Ruiz is next, and he's tailor-made for Haye. Haye reckons he'll "knock Ruiz spark out", and this time I don't think he's bluffing.

Don Curry, Ismael Laguna and Sugar Ray Robinson were far more illustrious scalps for Lloyd Honeyghan, Ken Buchanan and Randy Turpin respectively, but then none of that great British trio was giving away seven stone in weight and nine inches in height.

I'd advise you to disregard the trash-talk, that was just part of the plan. The real Haye is the man who arrived at the Nuremberg Arena with just his trainer and sparring partner in tow. He just wants to do his family, friends and countrymen proud, and he deserves all the plaudits he'll get. 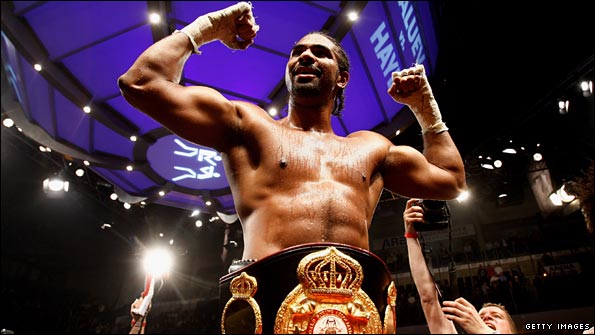 Haye says he want to clean up the heavyweight division

"We've been waiting for someone like David Haye to enter the heavyweight division," said Richard Schaefer, head of Golden Boy promotions in America, one of the biggest players in boxing. "Today is the beginning of a new time for the sport."

If Haye can see off Ruiz, which he should have little problem doing, it will be time to go hunting for Klitschkos, and they shouldn't be too hard to find.

Wladimir, who was supposed to have fought Haye in June before Haye suffered a back injury, holds the IBF and WBO belts, older brother Vitali the WBC. In Haye, they'll see Vegas and glory and dollar signs. And Haye will see the same in them.

"This was just the first stop, taking the WBA title from this giant," said Haye. "I've got the British public behind me and it's on to bigger and better things."

It's been one of those rare old weeks, a week when Britain loved boxing again: Grandmas on buses, kids in playgrounds, mums trying to spark conversations with taciturn sons, posh people, poor people, texters, bloggers and tweeters.

And I bet you heard the question asked at least once: "How's that little British fella going to beat that Russian giant?" Well, on Saturday, David Haye provided the answer: he did what he had to do. And in boxing, that's all that counts.

As well as my blogs, you can follow me when I'm out and about in Nuremberg at https://twitter.com/bendirs1