Anyone who spends any amount of time on the BBC's 606 messageboards will be aware the British sports fan is an unpredictable breed. All human life is there, from the cerebral and the measured, to the slightly more unbuttoned.

And I would argue that of all the sub-breeds, there is none more enigmatic than the British boxing fan: for the most part knowledgeable and passionate, yet head-scratchingly capricious.

Take the example of Amir Khan, who challenges Ukrainian Andreas Kotelnik for his WBA light-welterweight belt in Manchester on Saturday.

An Olympic silver medallist in 2004, Khan's first pro fight the following year was accompanied by a welter of media articles trumpeting his cross-community appeal and unifying potential. Only it hasn't quite turned out like that. 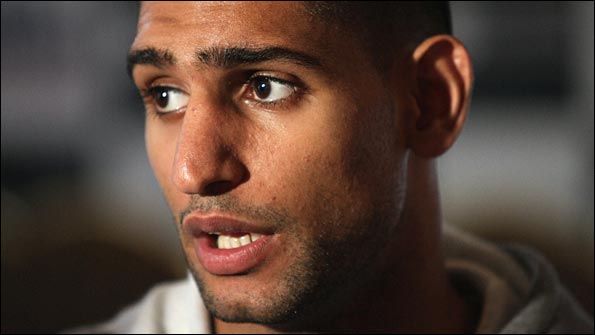 Fast-forward three years, and Khan is being booed to the rafters of the MEN Arena, having been knocked out in less than a minute by unheralded Colombian Breidis Prescott. My, how some of his fellow Brits in the crowd lapped that up.

"Most of what happened with the Prescott thing was jealousy, and in a way I can understand that," says the 22-year-old Khan. "I've been lucky enough to probably make more in 10 fights than they have in their whole lives."

Others have been irked by Khan's naked ambition, what in other countries might translate as confidence, but what to many Britons smacks of arrogance. He hasn't paid his dues on the domestic scene, his detractors say, he's over-hyped and disrespectful. For pity's sake, they say, did you see him wearing that crown at the pre-fight press conference?

Then there's the elephant in the room, the sensitive matter of racism. I heard it at the Prescott fight, and I heard it again before, during and after his victory over Mexican legend Marco Antonio Barrera in March.

Khan professed to be shocked when told there were racist undertones to the barracking at the Barrera fight, and I'm willing to believe it was down to a mindless few. After all, there were those who travelled thousands of miles to boo Ricky Hatton after his devastating defeat to Manny Pacquiao. One minute a hero, the next a no-mark bum deserving of derision. No, I couldn't work it out either.

One way - probably the only way - Khan can convert the doubters is by winning, and winning in style, starting with Kotelnik on Saturday.

After all, those accusing Khan of ducking domestic opponents won't really have a leg to stand on if he ends up with the strap round his waist. Well-managed, well-matched (Prescott aside), but that's boxing. And since when was boxing supposed to be fair?

Khan should be too quick and too slippery for Kotelnik, although the former European champion, who took the belt from Welshman Gavin Rees last March, is a solid customer who has lost just two pro fights in 34 and has never been stopped.

With an excellent amateur grounding (Kotelnik lost to Cuba's Mario Kindelan in the Olympic lightweight final in 2000, just as Khan did four years later), Kotelnik has a stiff jab and a tight defence, although he has a tendency to start slow, comes forward in straight lines and can be a little one-paced.

"I'm going to give him a boxing lesson," is Khan's take on proceedings - there he goes, riling those doubters again. "I don't think he's ever been in with anyone like me.

"Moving to 140lb [the fight against Kotelnik is Khan's first at light-welterweight] has made me stronger, fitter and more explosive. I can see a late stoppage happening."

If that is to transpire, then it will be in no small part down to Freddie Roach, who has been hammering Khan into shape at his Los Angeles forge since the reverse to Prescott.

"I have the best coach in the world in my corner," Khan says of Roach, the man who masterminded Pacquiao's two-round destruction of Hatton. "And he's hopefully going to catapult me to the biggest fights ever."

While Roach maintains he'd like to see Hatton retire, he is also a boxing realist and knows an all-British blockbuster "would sell a lot of tickets and make a lot of money" for both combatants.

A clash with Khan would also seem to be the only fight that makes any real sense for Hatton. 'The Hitman's' days as a Las Vegas headliner are history, but one last fight in front of his adoring fans, perhaps at Wembley Stadium, for a world title belt, could be a hell of a way to bow out.

"I know boxing is hard to step away from, I had trouble myself, and if he [Hatton] continues to fight, I want him," says Roach. "It would be a great fight for him and my guy."

Whether it would do much to enhance Khan's popularity, however, is doubtful. Just as the British public never really forgave the 21-year-old Joe Bugner for beating Henry Cooper in Cooper's last fight back in 1971, they might find Hatton's vanquishing at the hands of Khan difficult to swallow.

"I had another 20 fights in England after beating Henry and the reaction was painful every time," recalls the Hungarian-born Bugner, who went on to fight most of the top heavyweights of the time.

"If the boxing fraternity don't like the look of a fella for whatever reason, there's no way you're ever going to change their opinion," is how Cooper sees it.

Keep notching up the victories and the titles and still there will be those who don't take to Khan. But there will come a point when they'll have to respect his talent, and that may be all the polite young man from Bolton can hope for.