Keeping it real at the Lakeside

According to some scientist or other somewhere, Monday was the most stressful day of the year. Instead of moping about in his bedroom conjuring up equations of doom, he should have got himself down to the BDO World Darts Championship at the Lakeside in Frimley Green.

Like Scott, James, Andy and Nick, four 21-year-olds from Shrewsbury. They've each shelled out 850 quid for tickets and hotel rooms for the week and plan to spend another £400 each on beer. "It's worth every penny," said Scott, "although one mate pointed out that we could have had a fortnight in Benidorm." For that money, Scotty, you could have had a fortnight in Saint-Tropez.

Up on stage, Martin Adams, the 2007 world champion, is struggling with his doubles. Dave Chisnall, a debutant from St Helens, has taken him to a fifth and deciding set. Scott from Shrewsbury clambers to his feet and starts howling. Adams, nicknamed 'Wolfie', duly takes the next leg.

It was in 2007 that many first woke up to how great darts could be. Over at the rival PDC World Championship in Purfleet on New Year's Day, Dutchman Raymond van Barneveld came back from three sets down to beat Phil Taylor 7-6 in a sudden death leg. On a day brimming with sporting action, it trumped the lot.

A few days later, Adams gave up a 6-0 lead against fellow Englishman Phill Nixon before also triumphing 7-6. To paraphrase Sid Waddell, perhaps the greatest sports commentator who ever drew breath, there hadn't been that much excitement since the Romans fed the Christians to the Lions.

Sid, who was instrumental in making darts a fixture on our screens, doesn't do the Lakeside any more. He spent the festive period busting blood vessels and mixing metaphors at Alexandra Palace, the PDC World Championship's cavernous new home. 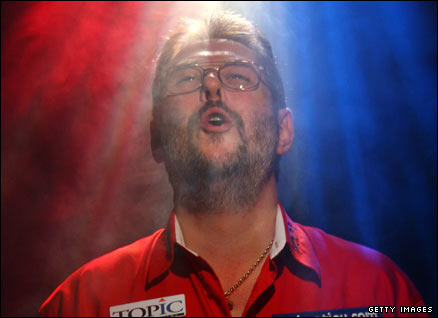 "The PDC crowd are awful and Alexandra Palace is a terrible venue," Wolfie tells me after finally defeating Chisnall 3-2 in a nervy old encounter. John Boy Walton, the 2001 world champion, is getting stuck into a full roast dinner on the adjacent table.

"The PDC is 'sports entertainment', while the BDO has a more educated crowd who love good darts. They have their favourites who they'll shout for and get behind, but it's respectful.

"They had blokes throwing beer around last week at Alexandra Palace, that's not a darts crowd. Some of the antics they get up to, they'd be shown the door at the Lakeside."

The vibe certainly feels slightly different at the BDO. In my previous visits to the PDC, there has been an air of 'ironic entertainment', that cynical and rather patronising modern British curse: "I'm not really a darts fan, but it's highly amusing pretending that I am for an evening."

"At the PDC, everyone's waving those boards about and just trying to get on TV," adds BDO spokesman Robert Holmes. "It's just one big booze-up and the darts is secondary."

The BDO (British Darts Organisation) and the PDC (Professional Darts Corporation) don't get on. Not since 16 high-profile players, including every previous BDO world champion still chucking, decided to set up their own world championship - which would become the PDC version - which was first aired on Sky in 1994.

The stream of defections from the BDO continues apace, and the PDC is the home of the greatest thrower of all time, Phil 'The Power' Taylor, who stormed to his 14th world title with a 7-1 beasting of Van Barneveld on Sunday.

But to at least some fans at the Lakeside, the BDO will always be the spiritual home of darts.

"The BDO has all the history, going back to the first one in 1978," says George Ivory from Bordon, Hampshire. "It's the one every player wants to win, like Wimbledon is to tennis players or Wembley to footballers."

"Even Phil Taylor, who won the BDO twice, will say winning here was a highlight," adds Holmes.

"The players that made the sport great - Eric Bristow, Bobby George, Jocky Wilson and John Lowe - all made their names here.

"For all Taylor has done, if you ask a man on the street to name a darts player, they'll probably still say Eric Bristow or Bobby George.

"There are 66 members of the World Darts Federation, of which the BDO is a member, and as many as 100m people will watch this year's event.

"We had the first player from Poland this week, and on Thursday we had Persian TV visiting, because Iran is a real growth area, with 500,000 members in the Iranian darts federation.

"They've latched onto the fact that darts can bring different groups together in peace. Instead of sitting down and debating things, they should have a game of darts."

Back out front, Northern Ireland's Daryl Gurney is doing battle with England's Garry Thompson. I ask Charona from Amsterdam why she thinks the UK and Holland are at the vanguard of darts. "Beer," she fires back, before jumping to her feet and waving a '180' board above her head. Thousands follow suit. It looks like a rubbish version of a North Korean mass games.

Beer is both the heartbeat of darts and a stick to beat it with. How, say darts' detractors, can it be a sport if most of its participants drink lager before a match and have the consistency of Spam?

So synonymous are beer and darts that when 2000 world champion Ted 'The Count' Hankey revealed live on the BBC on Sunday that he'd knocked beer on the head, it was like hearing Lance Armstrong announce that he trained entirely on battered Mars Bars.

"You can take darts out of the pub, but you can't take the pub out of darts," says Adams, before shouting over to seven-time women's world champion Trina Gulliver to bring him a pint.

"You don't have to drink. The generation coming up are slim, trim and exercise. Joey ten Berge (who lost to Martin Atkins on Monday) was drinking Diet Coke the whole time he was practising.

"But the image isn't unfair, we've obviously had a few beers and pies in our time. But so do golfers on the 19th hole and footballers in nightclubs, so we're not the only drinkers in sport.

"And we don't need performance-enhancing stuff to do well. We rely on talent and our mental state. And look at the mess cycling's in, there's always people getting caught out."

Aah, but Wolfie, how can you be so naive? Everyone knows that you can cheat to your heart's content in cycling and athletics, serve a two-year ban and all will be forgiven. Have a few lagers before you climb on the oche and you're nothing but a fat oik.

In the players' bar, I ask Bobby George, who sounds like fifty pence pieces being fed into a paper shredder, whether he cares if people consider darts to be a sport or not (it was recognised officially in 2005).

"I think it's a sport, but I don't care if anyone else thinks it is or not," says Bobby, whose right arm is cradled in a jewel-encrusted sling (ironic really, considering his left arm is weighed down with so much tomfoolery, a lesser man would require a winch to lift it off the dinner table).

"If people play tiddlywinks and they're world-class, they'll think that's a sport, so it's up to the individual."

It is difficult not to come to the conclusion that class has a part to play in much of the sneering. While snooker insists on its players wearing evening dress in an attempt to add a veneer of respectability (even though most of its participants would never wear evening dress in any other situation, apart from maybe at their own weddings) darts doesn't pretend to be anything other than what it is.

But while, for example, archery has been an Olympic sport since 1900, despite the fact that in terms of participation and audience its offspring dwarfs it, darts is still looked down on by many. Not that the Lakeside faithful mind much.

"You can relate to darts players, they're more normal than footballers or other sportsmen," says Neil Woodhatch from Bordon.

"I'll give you a prime example. I used to take my kids to watch Chelsea's reserves play in Aldershot, but they wouldn't sign any autographs. They haven't got time for you, they've lost touch with the public. Darts players aren't so distant, and that's what a lot of people like about them."

After Gurney has defeated Thompson 3-1 in the final match of the night, Holmes proudly tells me that the International Olympic Committee recently paid a visit to assess darts' Olympic credentials.

Sid Waddell only knows what the IOC members would have made of the sign on the backstage toilet mirror that reads 'DO NOT SPRAY FAKE TAN WITHIN THE LAKESIDE'. Something tells me darts' bigwigs have a lot more persuading to do.