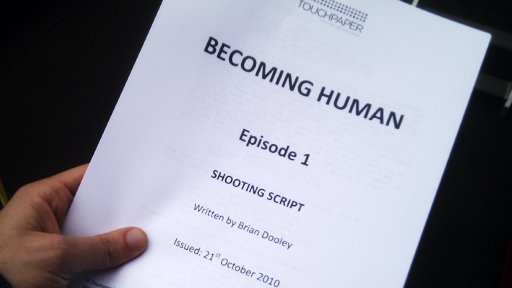 Can't breathe... here's the press release... Leave us your comments below!

An exclusive online extension of hit BBC Three drama Being Human has been commissioned by BBC Drama Multiplatform in association with BBC Three.

Following events that unfold in the forthcoming third series of Being Human, vampire Adam (Craig Roberts; Young Dracula) is at college trying to get himself back on the straight and narrow. It's here he meets the beautiful, cool Christa (Leila Mimmack; Married, Single, Other) - who just happens to be a werewolf. They strike up a friendship with Matt (Josh Brown; Grange Hill), and the three of them become embroiled in a mystery that leads to more than they bargained for...

Becoming Human will be produced by Touchpaper Wales, part of the Zodiak Media Group. They will work with the team behind the hugely successful Being Human website and blog - blog curator Barry Pilling and cross-platform director Garret Keogh - to create an innovative and interactive experience around the episodes.

Online audiences will be encouraged to interact with the story as it unfolds, with daily clues and materials posted on a new website linked to the Being Human blog.

Toby Whithouse, Becoming Human creator, says: "Yes, because *you* demanded it, the world of Being Human is expanding! We've got a cracking story lined up, with some terrific new characters and all the thrills and chills you can manage. I hope you enjoy watching it as much as we've enjoyed making it."

Sarah Clay, BBC Multiplatform Drama Commissioner, says: "The fans of Being Human are incredibly active online, so we wanted to give them something they could really get their teeth into. The Becoming Human online extension doesn't just consist of nine episodes, the narrative extends beyond that with daily clues in the form of press cuttings, anonymous tips, CCTV footage, mobile phone clips...giving the online audience the chance to follow the mystery on the blog as it unfolds."

Becoming Human will launch online at www.bbc.co.uk/beinghuman, midway through transmission of series three of Being Human, which begins on BBC Three in January 2011.