THANK YOU FOR THE MUSIC PART II 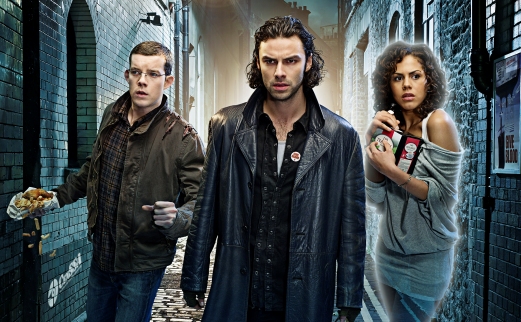 All hail Ross Sellwood, the Music Supervisor of Being Human who's in charge of the commercial music used in the show. He's back to talk about the sounds of the second half of the series. Prepare to add a few tracks to your playlist...

For me, ep 6 has the best soundtrack (Bat For Lashes and Rebekka Karijord at the front are the highlights) but i'm not sure there's too much science behind why they work, so I'll drone on about some others that are a little more strange ...

Normally George is ripping himself open in a dark basement/cage/dungeon and we have Richard's tortured score and fx over the top. So we have all the elements - the dark menacing setting, the tortured character tearing himself apart and the claustrophobic agonising score - working together. The compound effect of all these elements working in sync really powers the sequence home to an audience. And very well too.

But this time we used the music to work with the surroundings and not the character to really give weight to where this was happening to him (i.e., not in the woods/hospital basement/house etc), not just what was happening to him. The music and George are doing completely different things this time and this really works to emphasise both. For what it's worth, I think this is probably one of the best scenes from the series, just really confident and very clever.

I first heard the track on 6Music a few months ago. What a unique and vital source of new music that is.

It's really death-or-glory to go with classical music over contemporary drama - obviously it ramps up the jeopardy and tension and it's always beautifully crafted music but if you edit it wrong, you can sound cheap, over-cooked and possibly lazy. But the haunting choral arrangement and the way James cut it into the episode hit the mark for me. I hope most of the audience agree... but I wouldn't be surprised if a few didn't. But that's music. We should get Richard a choir to work with on S 3 perhaps?

Brilliant track to open the last episode and it seems to be an audience favourite too. But didn't come from me - James or Charles dug that out of somewhere (I still don't know where) and laid it in while I was still working on a bunch of other ideas that never got a look in. In case you're interested... Personal Jesus - Depeche Mode, Save Me - Aretha Franklin (or the Nina Simone recording if that's your preference). Or Max Romeo "Chase the Devil"... chin-strokers out there will know it as the reggae anthem that gave the The Prodigy the massive sample in "Out of Space". Maybe next series?

But Saved stuck first time. It gave a bit of humour to things, before we start the gruelling murderous assault on the rest of the episode. It sends up the cult members without bludgeoning the point, and most importantly people wouldn't have been expecting the track at all. Good work, damn shame it wasn't mine.

Were there any tracks you wanted to use this series but weren't able to?

We tried to use the Beatles in the 60's episode, but there was more chance of a snowflake surviving a flamethrower than us getting that cleared. I really wanted Roxy Music "Virginia Plain" to open episode 6 (for the flashback to 70's Kemp) but it was felt to be a bit lightweight for the pictures (the idea was that it's playing on Kemps car stereo then continues over the death scenes) And Blur denied us using "Tender" for the suicide sequence in ep 2... bit of an own goal from Damon et al. Their one mistake in an otherwise faultless career. But we ended up with Sigh no More / Mumford and Sons so it's all good in the end.

Looking back on it as a complete work, how would you describe the music of Being Human series two?

It's a bit more serious (in a good way) and runs a bit deeper. It's edgier and I guess that's a reflection of the content and tone of the series overall. There isn't as much comedy (but still some humour) and less of the indy-pop sounds (the Coral, Arctic Monkeys, etc ). We got to introduce people to newer or less mainstream artists. I really love the sound of this series and it makes for an awesome playlist.