TOBY'S BLOG: THE WRITING HAS BEGUN 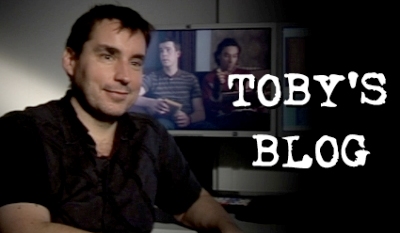 New to BH? Watch out, this post contains spoilers from series one...

We thought it was about time we released Being Human creator Toby Whithouse from his isolation room to tell us about what he's been up to since his last blog. Over to you, Mr Whithouse...

Well it's been a hectic few months since I last did this. I peep into the website now and then and the loyalty and enthusiasm of the fans never ceases to amaze me.  So I thought I'd take this opportunity to say thanks again and give you a bit of a progress update.

Well, after weeks and weeks of scrawling on a white-board and fretting over storylines and series arcs and so on, a month or so ago I finally started writing scripts again.

The storylining process is always stressful. It's the most important bit, but usually I can't wait for it to be over so I can actually WRITE. By then I'll have produced endless rambling documents about so-and-so's journey or the tone of the show or whatever, but it always feels like I'm writing about writing. All I want to do is get those words "Int. Morning. The House. Living Room." onto the computer screen and hear the character's voices again.  And sure enough, the moment I start, I feel a massive sense of relief and excitement.

The problem with having a successful series that gets re-commissioned is, you have to do it again. If one more person says the words "second album syndrome" to me, I'll punch them in the neck.

It would be ok if we knew how we made the first series any good. Despite what anyone tells you, a huge amount of it is chance. If there were a reliable formula for making good drama, there'd be more of it on TV.

It's like falling down a flight of stairs. All we know is we got to the bottom, bruised and a bit weepy, and when we stood up everyone applauded. We'd like to say it was carefully planned, but the fact is we were minding our own business on the landing and someone pushed us.

So we're just trusting our instincts again. I'm writing, hopefully, the way I always did. And producers Matt and Rob and Phil  - not to mention Russell and Lenora and Aiden - will do the thing they did.

Oh did you like Being Human: Unearthed? I hope it answered some questions for you. I loved it. Though I did spend the whole hour thinking "Couldn't someone have told me my glasses were on wonky?"

I'm avoiding the point of this, aren't I. You want to know about series 2. Well if I say it's difficult to tell you anything specific, that's not me being mysterious, it's because I keep changing my mind. Characters surprise you. I've talked before about how the line in the pilot about the men with sticks and ropes came out of nowhere. Similarly in episode 5 when Owen said "Hey, Annie, is that the best you've got?" Well, things like that happen a lot. It makes writing exciting. So I'll come up with a new character and think "Oh yeah, he'll be a major player" ...and then he just kind of withers on the page. Conversely a bit-part character suddenly expands and becomes the guest lead. That's pretty much what's happened on episode 1 actually. So if I say anything now, the chances are by the time you read it, I'll have changed my mind and it'll be a show about psychic firemen.

Rest assured the next series will be bolder, darker, funnier and even creepier.  Hopefully.

Anyway. I'll be back soon. In the meantime, keep reading, keep posting and keep being nice to each other.