BEING HUMAN RECOMMISSIONED FOR SERIES TWO 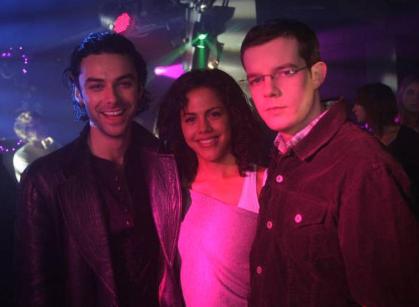 Ring the bells!  Strike up the band!  Make a cake and for goodness sake get that champagne open!  Because Being Human has officially been recommissioned and will be coming back for a second series!

One big reason for the show coming back has been the fantastic reaction from you guys, the fans, for giving the show great viewing figures, making it the highest viewed show on iPlayer and making this website one of the most popular on the BBC.

Pat on the backs all round, and I for one shall raise my glass to you *hic*.

Danny Cohen, Controller BBC Three said "'I'm thrilled that we are re-commissioning Being Human. It's hugely popular with young viewers and earned great critical acclaim at the same time. It's also a very important staging-post in the successful development of home-grown young drama on BBC Three."

Ben Stephenson, Controller BBC Drama Commissioning added:  "I am very excited Being Human is returning for a second series. It's a distinctive modern series that has captured the imagination of the BBC Three audience in terms of strong viewer loyalty and critical acclaim, signalling a real breakthrough for drama on the channel."

Rob Pursey, Executive Producer for Touchpaper Television says:  "We already have some very exciting, very dark new stories up our sleeves, so we're delighted to have the opportunity to make a second series of Being Human.  BBC Three has been a brilliant platform for us to mount an unusual and ambitious drama."

So that's the reaction from the big bosses, but what do you guys think?  Time for a party, yeah!?  And don't miss a special message from Being Human creator Toby Whithouse on his next post here on the blog...  Woo-hoo!