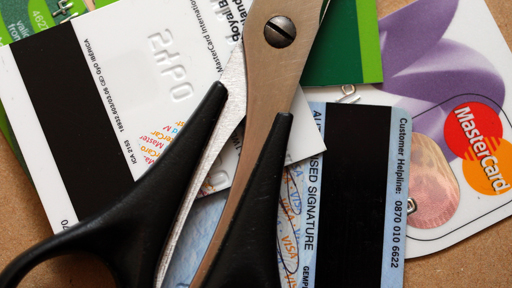 It's the same old line you either hear your mates asking you, or you asking your mates, 'cos one thing is for sure – being young very often = being broke. Or does it?

With credit cards, payday loans and overdrafts being pushed on to our radars through an ever-increasing variety of adverts, credit is almost available through one tick of a box and one signing of a form. But credit does, as we all should know, lead to debt. And debt has to be paid off, interest rates and all.

Have a little watch of this to see what these guys make of debt:

So how can we know our APRs from our elbows, and how can we stop ourselves from getting into bad debt that we can't pay off? To debate some of these questions, tune in to the Free Speech Debt Special coming live from Manchester on Tuesday 11th September at 8pm on BBC Three.

To kick the debate off, we asked two Free Speakers to answer this question:

When it comes to debt and credit, does greed outweigh common sense?

Greed often outweighs common sense because many of us seem to have a need to purchase lavish and unaffordable products due to intensive and often intrusive advertisements on TV, radio and in print without considering the financial impact on budgets.

The growth of the nasty, over inflated and often financially crippling yet attractive payday loan sector, now "worth" £1.7bn, and having expanded five-fold in recent years, is only testament to this.

We must begin realising that we live in 'austerity Britain' and, as such, need to cut back on purchasing what we cannot realistically afford to ensure that we live comfortably and do not struggle for vital, life preserving items such as food.

Although I believe credit cards are the devil's invention, I do feel that in some instances borrowing money is a necessity. I am currently a second year University student from a fairly middle-class background. However like most other students, I would not have been able to afford a degree without the help of a student loan. I didn't take out the loan because I was greedy, but because I wanted to give myself the best opportunity for later life. I have the hope that it will aid me in securing a high paid job and allowing me to pay off the loan eventually.

Looking further ahead, I one day hope to purchase a house. The likelihood of being able to afford one without taking out a mortgage is extremely low. Again I don't feel that this makes me a greedy person, but it's something I feel I need to do to enable myself to live my life. However, I think the question of greed shouldn't be centered around taking out the loan in the first place, but actually about how you repay the loan. I, for example, would consider myself greedy if I chose to spend my wages on a new car instead of paying off my debts.

I do not believe for one minute that people should spend money that they do not have on luxury items such as flash cars and big screen TVs. Instead I'm suggesting that to get the most out of life, you may sometimes need a little helping hand... just make sure that one day you can pay it back.

On one side there’s the temptation to slap everything on a credit card so you can look hot in your designer threads, not worrying about the consequences, as the bill won't come through for another month. Plus when you never physically see the money, but just have to type in your PIN, it must be easy to get carried away...

Or is debt an entirely sensible thing? Get yourself into debt when you're young so you can better yourself and buy the things you need in life, knowing that if you stick to the straight and narrow you'll pay it off in due course. That's not greedy, right?

These two sides of the argument are missing a vital point however – people who HAVE to get themselves into debt purely to live. If you're buying your food on a credit card and paying your bills with a loan, then which category does that fall into? Maybe into its own one - survival.

Greed, common sense, a necessity to survive are just some of the arguments about getting into debt, but where do you stand?

As always Free Speech is about YOU having YOUR say. So leave your thoughts in the comments below, or get involved with the debate on Facebook or on Twitter and your points could be included in next Tuesday's live show.