If we had a quid for every time we used the line 'Mum, Dad, please can I borrow some money?' we'd probably all be millionaires.

But we're not all millionaires. In fact a lot of people are in debt, and in an exclusive Free Speech survey, 40% of those 16-25 year olds we asked who are in debt admitted they are worried about it.

And that's hardly surprising considering 23% of people who took part in the survey said they think it will take more than 15 years to pay back the money they owe.

No doubt parents are worried too, as the survey showed more than a third of young people are more financially dependent on their parents than they expected to be.

We think these shocking statistics need talking about. So, tonight Free Speech will be live in Manchester to debate the issues surrounding debt, alongside the other big topics of the moment such as the booing of George Osborne at the Paralympics, the publishing of Prince Harry's naked photos, and the overhaul of the Disability Living Allowance.

Joining us tonight we have a top notch team of expert panellists:

Francesca Martinez - You may recognise Francesca from her Grange Hill or Extras days as she's an actress and comedian. She is currently touring the UK with a show that addresses what 'normality' means today.

Ben Howlett – As the National Chairman of Conservative Future, Ben works with young people who are up and coming Conservatives and encourages debate from a more youthful perspective.

John Leech – Liberal Democrat MP for Withington in Manchester, John plays for the Parliamentary Football Team (who knew) but started his career flipping burgers in McDonalds.

Shiv Malik - Nominated by the Evening Standard as one of the most influential Londoners, Shiv is an investigative journalist for The Guardian. He writes about political issues affecting young people and is known for his reporting on terrorism.

As the panel get stuck into the debate, you can let them know if you agree or disagree with their points by powering up our Twitter-activated Power Bar. It's so simple – you couldn’t make a hash (tag) of it if you tried. (Sorry...) 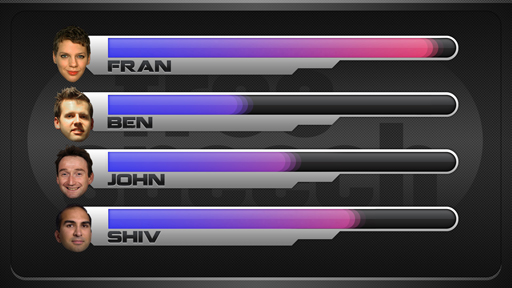 Tweet #YesName if you like what a panellist is saying and tweet #NoName if you don't. The Power Bar moves in real time on the show and gives a voice to those of you watching and shouting at the screen.

Here are the #hashtags you need to know:

If Twitter's not your bag then get involved on Facebook where all of the questions will be debated live along with the show. Or simply leave your comments in the space below.

As if these juicy topics and expert line-up weren't enough for one show, we will also be revealing our brand-tastic new set and introducing this month’s social media jockey, Tinea Taylor.

Tinea will be taking charge of the Free Speech social-media-sphere, bringing the online debate to the studio floor. Not only is she is addicted to social media, but as Rinse FM’s breakfast show presenter she is used to getting her voice heard live on a daily basis. But now she’s here to get YOUR voice heard so make sure you say your piece on Twitter or Facebook or in the comments below this blog.