According to a recent survey, 86% of 16-25 year olds don't think that the Olympics will make them better off financially, and 62% think that the money would have been better spent elsewhere.

Oh dear. It's not sounding too positive for the 500 young people who took part in a poll conducted especially for Free Speech to launch tonight's live Free Speech debate on the Olympics. (Tonight, 8pm)

However, 71% agreed that the Olympics are making them feel proud to be British, and 61% admitted to even being excited about the games, so maybe it's not all doom and gloom.

To debate the issues surrounding all things Games related, we've lined up a stellar panel of those in the know:

Tasha Danvers: A British Bronze Olympic medal winner in the 400 metre hurdles in Beijing, Tasha suffered a late injury that has sadly stopped her from taking part in London 2012.

Rushanara Ali MP: Labour MP for Bethnal Green and Bow, Rushanara has been named as one of the most powerful Muslim women in Britain. She's been supporting her constituents in the Olympic boroughs, including those who are finding missiles on their rooftops as part of Olympic security.

John Hayes MP: As the Government Minister in charge of Further Education Skills and Life Long Learning, John joined the Conservative party when he was just 14 years old and is in one of the party's safest seats as MP for South Holland and The Deepings (Lincolnshire).

Symeon Brown: Co-founder of Haringey Young People Empowered, Symeon aims to improve youth and community relations and give young people a stake in the democratic process, and describes himself as an 'activist/writer on youth, justice and urbanism.'

As they give us their chat, YOU can give us your OPINION of their chat, by powering up or down the Twitter-controlled Power Bar.

It's pretty simple – as they're talking add a #YesName to your tweet if you agree with them, or a #NoName if you don't, then watch the Power Bar change in real time on the show. So for these guys the hashtags are: 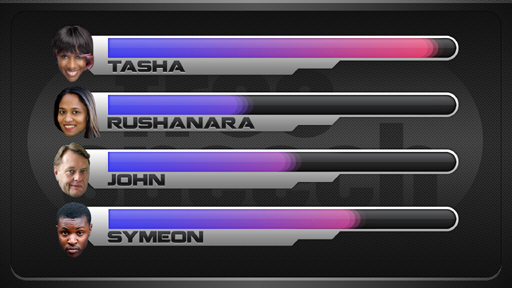 If Twitter's not your thing then head to our Facebook instead, where all of the questions will be debated live along with the show. Or simply leave your comments in the space below.

We will be reading out tweets, Facebook and blog comments live throughout the hour so if you have something to say, get on and say it... now.