It takes a lot of money, brains and ambition to become a pilot. But once you've made it, get ready to see the world. EasyJet First Officer JF Zachopoulos is known as a baby pilot, as he's only been piloting passenger jets for three months. Here he gives his tips on breaking into the industry.

Current job: Pilot. I'm a First Officer, which is number two in command of an aircraft. 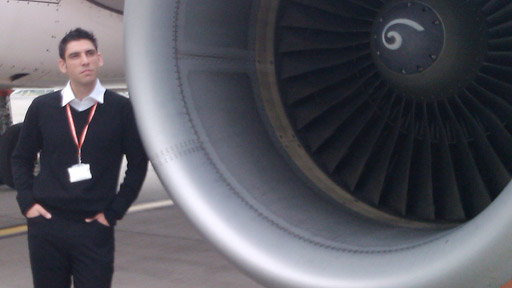 Number of years in the industry: I'm a baby pilot in this position, just three months. I started training in September 2008 and finished March 2010. Then I was out of work. The quickest route to finding work is go to the training school and then apply through their links with the airlines. You do your basic commercial license then with EasyJet you spend six weeks learning to fly the Airbus.

Typical hours: It's quite random. Depends on your rota, but you have maximum hours you can fly. I can fly up to 100 in a month, 900 in a year. I usually have about six-seven flying hours in a day, but then you have to be there early to prepare so it's about a 10-hour day. You usually have four flights a day. If you're not flying you could be on standby - which means you're either waiting at the airport or you're at home with your phone on.

Qualifications/courses I took for this job: You have to get your commercial license, but you don't need any qualifiactions beforehand. To go to the training schools you usually need five GCSEs and 3 A levels or a degree (usually in numerate subjects). I had a private pilot's license but you can be totally inexperienced.

Childhood dream job: To be a pilot. There is a picture of me as a kid holding a fire engine in one hand and a plane in the other. And I was in the fire brigade before I became a pilot. I went to uni first, but with the idea of being a pilot afterwards.

First job: I was in the fire brigade doing engineering.

Other jobs I've done: Office temping jobs as a student.

Most useful skill I've learnt: Dealing with people. In the industry it's called CRM - crew resource management. It's basically teaching you about how you interact with the person next to you (the other pilot) and what's going on in any situation. You become a better communicator. It's a massive part of the job.

My first job helped me get where I am today because..: It taught me about working with people. If you go into being a pilot with life experience or job experience, it's a help because you can deal with situations and with people.

Best thing about my job: The views.

Weirdest day at work: We were coming back from Nice and we were just about to push back from the airbridge and we heard this horrible screeching grinding noise. I looked at the pilot next to me and we were asking the ground whether it was coming from outside, on the airbridge. It was actually the PA system on the aircraft but we tried everything. Oh and we had a bird strike coming into Nice. It was pitch black, and then I saw a bird coming through the cloud - which made a nice thud.

Toughest career moment so far: The training - it's intensive. By the end you feel a bit brain dead. By the fifth day you don't know what's up and what's down. It's all very technical.

The biggest myth about my job is..: That's it's a glamorous lifestyle. If you're working long haul for BA you do get to go away to some amazing places though. Also that it's very lucrative. The industry has changed quite a lot. To get into it you are saddled with a massive debt - I'm £120,000 in debt. The training school costs about £60,000 then your course on the aircraft with the airline is about £30,000. You can get a professional loan for about £50,000 but then you have to come up with the rest yourself. I guess the younger you are the harder it is. I started when I was 26, so I had a few years working. Forget it if you're coming out of school though.

If you want to work in this industry you need to..: Study hard, and think hard about it as it's expensive. If you really want to do it work to get the cash and work hard for it. And also remember that it's not a guaranteed job, even if you train. I know people who graduated and still haven't got a job. I was out of work for a year, it's not easy. You also have to be medically fit. And get an eye check.

If I hadn't had done this job, I would have..: Working for the fire brigade. I enjoyed working there in the engineering department. But I had always wanted to be a pilot.

Jane Fitz-Gerald is part of the Up for Hire Interactive team.