Introducing Wu-How: The Ninja How To Guide

If you've always wanted to know how to make flip flops out of a carpet tile or how to get the smell out of your jeans without washing them, then we've got the show for you! Starting tomorrow night on BBC Three we present Wu- How: The Ninja How To Guide. It's a brilliant collection of 'how to' guides to help you complete day-to-day tasks. Sharing their sacred Ninja knowledge in the first show will be: Black Ninja (who'll show you lifeskills), Grey Ninja (the tech expert), Pink Ninja (the domestic goddess), Red Ninja (skilled in the ways of arts and craft) and Brown Ninja (the DIY expert).

Here's a little preview from the first episode featuring Pink Ninja, so "grab your pollocks" and press play.

If you're loving the look of that as much as I am, you'll want to know more. Luckily for you I caught up with Wu-How creator and producer Andy Mosse a few days ago. So Andy, tell us more about what people can expect from the show.

Essentially it's a funny 'how to' guide for life so there are lots of different things that you can get out of it, but instead of Blue Peter presenters showing you how to do it, it's got ninjas and people with ninja knowledge. We want people to learn stuff too hopefully and we're poking fun a little bit at the 'how to' genre. The thing is when you're doing pure comedy if people don't find it funny they hate it and it's failed, but at least we can say that you've learnt something when you watch this!

I'm assuming you're a kung fu fan and that you're into ninja films? Is that where you got your inspiration from originally?

Yes I am a bit of a ninja fan, but it's not kung fu. I have to make a clear distinction here between ninja movies and kung fu movies. Ninja movies are the bad ones in the eighties called things like Ninja Terminator. There's a whole bunch of eighties ninja movies that are hilarious and they are like a whole genre. They never have the skill of the kung fu movie nor the action of the great eighties blockbusters. They're just kind of a poor half-way house between the two and I love them, they're hilarious. They're all on You Tube so you've got to go and watch them. There's a kind of myth around the ninja that ninjas are mysterious and yet good at stuff. So we've used that to show you how ninjas can teach you how to make your life better.

Is there a particular scene from Wu-How that is your favourite?

There are some that are just kind of silly and don't actually teach you anything and there are others that teach you lots of neat tips how to do something. There's one called How to Kiss Like a Ninja and it really is nonsense. But it featured my daughter because we wanted to play on the idea that the breeding techniques of ninjas have been a great mystery for a long time. We see a clip of a mini-ninja which is my little daughter, who was only one and a half years old at the time, rolling around on green screen. She took a while to dress up in the white ninja outfit but we got there in the end. She is officially called the Micro-Ninja. (You can watch How to Kiss Like a Ninja in the second episode.)

What has been the highlight for you in making the Wu-How series?

Dressing up as a ninja for your job is probably the highlight! And we managed to persuade everyone in the production team to dress up as a ninja at one point. Which was great. 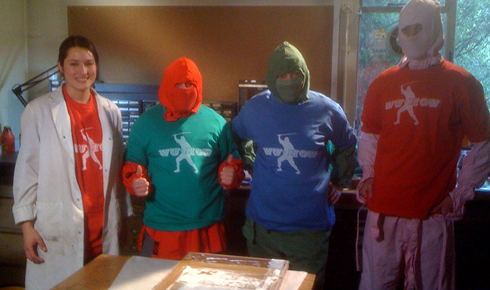 Andy Mosse is creator and producer of Wu-How: The Ninja How To Guide

The first part of Wu-How: The Ninja How To Guide is on BBC Three on Friday at 8.30pm.