If you haven't read the Big Noise stuff on this website, and followed links to find out all about it - please do so now. You might've noticed that the Simon Bolivar Youth Orchestra and the Venezuelan 'EL Sistema' have been getting me all worked up recently. Conductors, from Abbado and Rattle downwards, have been saying that this is the most important thing to happen in music.....ever. Well, who am I to disagree? Concert managers are drooling - Dudamel and the Bolivars are the hottest classical music ticket......ever. What's it all about? Have you read about it, watched the many videos on YouTube? This week Jose Antonio Abreu, the Sistema founder, receives the Glenn Gould award in Toronto, to the accompaniment of the Bolivar orchestra's visit - concerts and city-wide workshops like nobody has ever seen. Just in case you don't read that link, I'd underline that Abreu has cajoled them to treble the prize money, and spend it all on instruments for the kids in Venezuela. Four members of the orchestra, the Millenium Quartet, visited us at the Daphnis and Chloe concert a couple of weeks ago. They were in Stirling for the week, working with the Big Noise children and teachers in Raploch - ending with the first international Sistema Scotland conference. I hope you're beginning to build up a picture of what's going on. Meeting the Venezuelan players, and watching them play, has got me all worked up again - fizzed up with the infectious fun that the children were so obviously having. Adults and children were all mixed together for the conference lunch, during which the children were sparking with enthusiasm for their musical games - I had to quickly loosen up and join in with them.

Hello, it's David here from the second violins. Firstly, apologies for my absence from the SSO Blog for a little while...I'll try not to leave it so long next time.

We've had the most amazing/intense/inspiring fortnight with Donald Runnicles, our new Principal Conductor. Wow, just wow. What a start! For me, playing Ravel's complete Daphnis et Chloé was the highlight. I'd never played the whole piece before, only the second orchestral suite that Ravel extracted. Playing the famous depiction of sunrise in its true context, with full chorus (in this case the Edinburgh Festival Chorus on particularly fine form) made for such a magical climax, it wasn't just spine-tingling - it set every atom in the hall abuzz. I hope I don't play Daphnis too many times, I'd hate to get used to that feeling. There are a few things in life that I would rather enjoy every few years - the Jerome Robbins Afternoon of the Faun, for one...also the scallop risotto at Chez Janou. Daphnis went straight to the top of my list after last week. 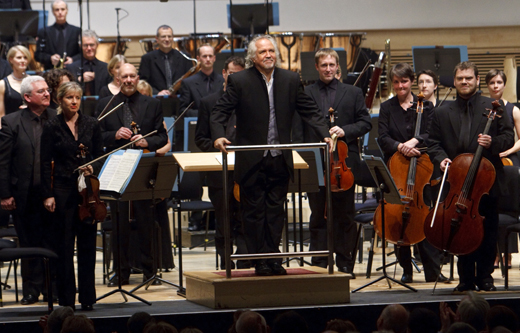 As our season 09/10 is now in full swing I thought I'd post some of the reviews we've had thus far. All have been positive and it seems Donald's first few gigs were very well received and a buzz has been created.

Ken Walton reviewed our Edinburgh Usher Hall gig giving us 5 stars and commenting that
"Runnicles took us to the swirling peaks and troughs of Mahler's Symphony No 1, and an epic, measured performance that matched fragile anticipation and aching tranquillity with the torment and triumph of the symphony's final moments."

Myth-busters and how to hype-proof your magic

Thursday night saw both Donald Runnicles and Gustavo Dudamel launching their new tenures - here and in LA respectively - both sailing forth on Mahler's First. So, conductors are the hot topic. Last Tuesday in The Guardian, Philippa Ibbotson fired a whacking great torpedo at the whole conductor thing, and on Thursday, in The Guardian Online, Tom Service took vigorous evasive action........both actions stirring up turbulent wakes of discussion posts, crossing and splashing against each other. I doubt if any conductor in the history of the world has ever had such a massive cargo of expectations and hype dumped on him as Dudamel: 'Saviour of classical music' - the messiah of music, no less!? In the zazzy documentary preceding our live TV Mahler 1, Norman Lebrecht (a familiar prowling musical MTB in these waters) fired a torpedo something like, "The new conductor has to create the myth that he is doing things better than has ever been achieved before". Ouch! 'Ouch' because it has a hype piercing tip. But, maybe, there is something vulnerable needing to be shielded by that hype.....

James MacMillan on The Confession of Isobel Gowdie

We recently interviewed composer James MacMillan at the Edinburgh Festival and asked him about his work The Confession of Isobel Gowdie. The BBC SSO premiered The Confession of Isobel Gowdie at the Proms way back in 1990 and we're playing it again in Glasgow and Perth this week. James was more than happy to give us some insight into one of his most famous works and you can view the interview below. He also gave us a little bit of chat on The Sacrifice and what it takes to be a composer and we'll post those interviews at a later date.

You can stay up to date with Scottish Symphony Orchestra blog via these feeds.