2012 seemed to be a fractured year for albums, there were no overriding genres or styles that dominated the end of year lists. Likewise few of the big established bands came up with career-defining records. However this did give new styles and artists a chance to flourish and grow through the cracks into popular taste.  And when we compiled the 6 Music Top 15 Albums Of The Year List (Top 10s are so passé and a Top 5 just doesn’t cut it) it became very obvious how diverse people's tastes had been this year.

The presenters and staff put forward their top five albums, the list was compiled, an album was revealed on air each weekday for three weeks, and we chatted to a load of the musicians about how their songs came about. 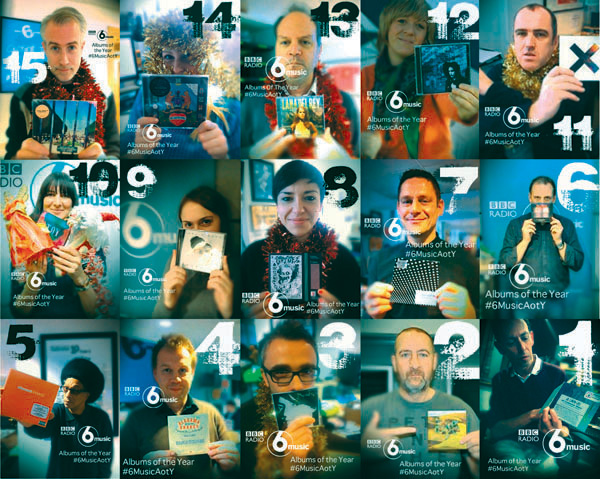 First up the surprises – no Paul Weller and no Richard Hawley. Maybe we’re just over familiar with the names, but both made strong records that didn’t make the 15. Most surprisingly for me, was Joe Goddard’s band The 2 Bears getting to number 14 while his day job Hot Chip didn’t make the cut. Also odd was Tame Impala’s Lonerism just scraping into the list at 15. For such a critically heralded piece of work, I expected a higher placing.

Toy did well, hitting number 10, beating off competition from big hitters Jack White and Lana Del Rey and It was good to see so many new artists in the Top 10 – and so many debuts – whether this means we value the freshness of ‘The New’ when it comes to these lists, but Jessie Ware, Poliça, Frank Ocean, Django Django all got listed for their first musical outings. All great albums, with oddly very little in common.

In the end our winner was Alt-J (who also won a Mercury Prize let’s not forget) with an album that managed to be both original and smart, as well as being easily enjoyable and accessible – for me their single Tessellate alone was enough to warrant their inclusion on any end of year list.

It’ll be interesting to see how so many of these artists can follow up the acclaim of their debuts (The xx managed a placing of 11 for their *ahem* sophomore effort).  There’s a lot of coverage of a lot of bands out there, and the concept of slowly developing over several years before being seized upon is long dead.  But conversely artists are being forced to look further afield for influences and break more rules in order to get noticed - and it fair to say that the potential shown in the 6 Music Top 15 could result in an increasingly multi-faceted and interesting 2013.