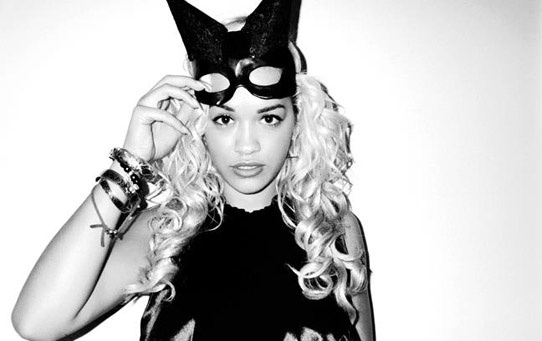 Rita Ora has had a tremendous 2012. As lead vocalist on DJ Fresh's Hot Right Now, she scored a first number one in February; and the 21-year-old singer has followed that with two solo chart-toppers: How We Do (Party) in March, and Mays Tinie Tempah-starring R.I.P.

After a spotlight-stealing set at Radio 1's Hackney Weekend, Ora's debut album, ORA, was released on 27 August through Jay-Z's Roc Nation label. Featuring contributions from the likes of The-Dream, Diplo, Drake, Chase & Status, will.i.am and J Cole, it's the sort of star-studded affair that can't fail to translate into even more success for the London-based artist.

BBC Music spoke to Ora just ahead of her album's release.

The album's been about two years in the making - is it a relief to have it finally out there?
Well, there's nothing I can do about it now. If it was up to me I'd have been working on this stuff forever - but I'm relieved now that everyone can hear it. I'm going to love hearing what people think about it - I'm really excited about that.

You've spoken before about your love of Gwen Stefani and No Doubt - but these are hardly cool, contemporary touchstones for a new pop artist to have.
All I can do is take influences from where I was raised. And I was raised in west London, so things like the Notting Hill Carnival was always around me, and I'd listen to all the music I could from London. But also I listened to a lot of American pop - and I think that does come through in my music. There's soul in there, and some carnival flavour too. I'm influenced by music that my dad used to play, too, like Sade.

You've got a mezzo-soprano vocal range - is it fair to say that people haven't heard everything you're capable of yet, on the singles?
I think you're going to definitely hear more sides to my voice on the album - and that it's going to seem more distinctive after this album comes out. I don't think I'll get compared to so many other artists, vocally, once people hear how I am singing on the album.

Amongst the more interesting collaborators on the album is The-Dream. He's huge in the US, and world-renowned as a great writer and producer; but not so well known as an artist in his own right in the UK. What was it like to work with him?
It's true that he's not really made it in the UK as an artist, but he's written Baby for Justin Bieber, Beyoncé's Single Ladies (Put a Ring on It), and Umbrella for Rihanna, so he's written some really defining moments in the careers of some of pop's biggest artists. So he knows what he's doing. In terms of him connecting here... I guess you have to build from the ground up as an artist, whereas it might be easier as a songwriter as the artist you're writing for may have already done that groundwork. We worked together out in Orange County. He listened to me sing, and then he wrote from there. He listens to a voice and writes a song to suit that voice. I don't really take a breath in the song I've done with him, Roc the Life - it's not rapping, but it has a similar flow.

That must have been refreshing, as many a producer/writer will amass a stock of songs to then use with particular artists, rather than tailor one so exactly.
Yeah, like you say, that happens a lot - and it's hard for a singer to adapt to certain tracks. But you have to work this out for yourself - and a lot of singers do after their first albums. But The-Dream really took the time to get to know me as a person, and I think that really helped the song. That relationship made a big difference.

Sounds like a dream come true...
(Laughs) I'm going to tell him you said that.

What about in the future? Any dream collaborations? No pun intended...
Diplo's a good friend of mine so I'd like to work more with him. And I'd love to work with a producer who nobody really knows yet.

We saw you at Radio 1's Hackney Weekend. What's it been like, taking these songs from the studio to the stage?
I think I've always been fine on stage - though I get nervous beforehand. But once I'm on stage, all of that goes out of the window. It's such an amazing rush... it's a really good feeling.

Finally, do you have any favourite albums, other than your own of course, from 2012 so far?
Frank Ocean's album, I love that. Chris Brown had an album out this year too, didn't he? That was good. I can't think who's had an album out! Netsky's album was great, and Lana Del Rey's album was really good. It was all about heartbreak, and every song was about the same thing really. But she managed to sing each song differently, and really put her own identity on it.

ORA is out now on Roc Nation and reviewed on BBC Music.