If you're a Later... with Jools Holland fan, you may have noticed at the start of the live programme on Tuesdays we have been putting what's known as a Twitter 'hash tag' on screen for a few seconds. It looks like this: 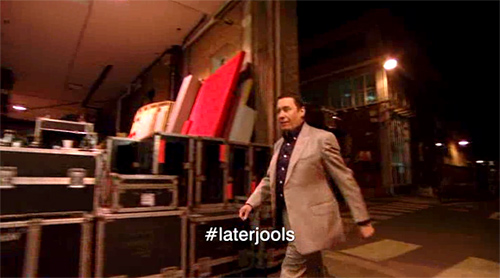 The thinking behind this is quite simple: firstly we wanted to make watching the programme more social for those who like to watch TV with a laptop running at the same time. Secondly, it's a useful way for us to gather some instant feedback.

We decided on an official hash tag for Later with Jools - #laterjools - to prompt viewers to offer their feedback and tag their comments. This facilitates the aggregation of comments around a particular subject, so by searching for the hash tag on twitter.com (or using a Twitter service like Tweetdeck, Twitterfall, Icerocket or Twitscoop - more here) it's simple to sit back and watch a stream of comments pouring in.

This is providing great feedback and, most importantly, makes the experience of watching this live music TV programme a much more communal experience. You'll see some of our favourite Tweets on the Later site in the embedded Twitter module.

The results have been very encouraging. Initially, the main response was a mix of geeky glee and pleasant surprise that the BBC, and Later in particular, was actually putting a hash tag on screen:

How do you REALLY KNOW when a production team "get it"? They simply display a hashtag on screen (no twitter ref). Good work BBC. #laterjools4:52 PM May 7th via web

I love how Later...with Jools Holland has it's website and then a hashtag at the end of the show on the bottom of the screen #laterjools7:09 PM May 14th via web

wow. How long has Later... been having the #laterjools tag flash up at the beginning of the show? That's amazing.4:21 AM May 2nd via TweetDeck

Then it quickly became a running commentary on the artists who were performing live on the show. Lots of positive comments, and of course some less so. We saw over a thousand tweets coming in during the first 30 minute show of the series, so keeping up with them whilst watching at the same time has its challenges.

Achingly beautiful performance from Gorillaz on #laterjools last night, the power and simplicity of On Melancholy Hill gets me every time 8:45 AM May 1st via web

If I ever have a son, his middle names will be Boogie Woogie... and he shall play the honky tonk joanna like no other. #laterjools4:28 PM May 7th via Echofon

It's clear to us that the trend for watching TV with two screens - the television and a laptop - is becoming more mainstream. If you haven't tried it before, it can add a whole new experience to watching TV, or in fact listening to the radio. It can be funny, insightful, annoying and exasperating in equal measure.

We hope this has helped make watching Later a social experience not a solitary one, which is a good thing in my book, given that we've all got views on music and we often like sharing them.