In Memory of Mick Green

Just over a year ago I was talking to Bruce Springsteen about death, as you do. Bruce was wearing a t-shirt with the skull and crossbones on it, and he gestured to it as we talked. "Death's in most great rock music" he said. "The presentness of so much rock music, the life force in it, it's a ranting against the other thing. The mythology is always mixed - the skulls, the crossbones, the death's head. It's ever present, it cuts through all popular music." I thought about that yesterday, stamping my feet to keep warm in a cold, snowbound Essex cemetery, there to say goodbye to Mick Green. 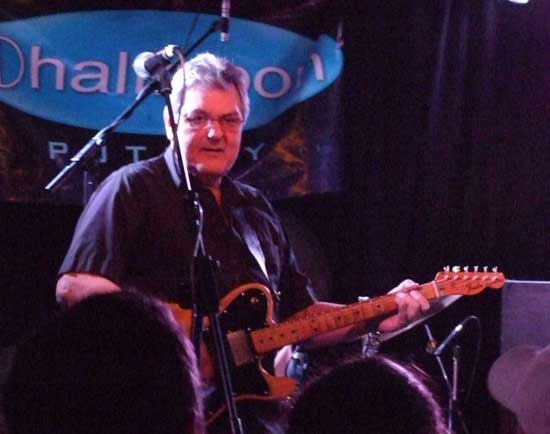 Mick was the guitarist in The Pirates - whose logo is, yes, the skull and crossbones - but he was a great deal more than that. A few years back, he was appearing with Van Morrison on Jools Holland's Hootenanny when he played a solo on The Philosopher's Stone that was so gorgeous, so fluid and so spine-tingling that I've never been able to watch it again for fear of spoiling the memory. When I asked him about it afterwards, Mick was typically self-deprecating. "Oh yeah" he said. "I wasn't expecting that; Van just pointed at me and said "play"".

Mick would never tell you that he was one of the greatest guitar players the UK ever produced, but he was. Never follow The Pirates they used to say, and it was a very brave - or a very stupid - band who chose to go on after Mick's incendiary style had been unleashed for an hour or so. It was, literally, jaw-dropping. You could see countless people in Pirate audiences stare opened mouth as they realised what he was doing, and then stare even harder as they tried to work out how. It was a bewildering mixture of lead and rhythm played simultaeneously and often at what seemed like impossible speed. But crucially, it was done always with taste and always in the service of the song. It wasn't technique for its own sake, but technique deployed to an end.
You sensed that was what Van loved in him. You can certainly hear it in his playing with Paul McCartney on Later and on Parkinson, pummelling rock'n'roll standards with an immensely powerful but restrained performance, a clarion call across the generations.

And the stories he used to tell. Interrupting Elvis and Engelbert comparing collars in Las Vegas to get the King's autograph for his sister. Trying to borrow the money to become the Beatles' first promoter in London, only to be told - by Johnny Kidd no less - that they'd "never be bigger than Joe Brown". Turning up to a Dutch TV show with the Pirates to find they were expected to play on a full scale model of a galleon. And further back - an adolescence seduced by Teddy Boy style but hampered by setting fire to your quiff trying to dry it over a gas ring. In Gibson Martin Fender, the only man ever to use Battersea as the setting for a rock'n'roll song, and how your heart lifts when he hits the fluttering, choppy riff at that song's core.

Mick was 65 when he died, and his website is full of tributes from people like Pete Townshend, and anecdote upon anecdote from a rock'n'roll life well lived. But back home in Essex, Mick taught guitar to primary school children, children like Elliot, and they wrote as well: "Mick was teaching me acoustic guitar at school. Mick was a very good man he always tried to make a lesson fun and i would always look forward to my lessons on a Thursday. I will miss him a lot".