The road wound, seemingly endlessly, through scrubby wasteland. Other than the track we were on, there was no sign of human habitation for about 4km. But this was Madhya Pradesh in India, a country of 1.2 billion people. My colleagues were even more surprised than I: where were the people?

We were on the outskirts of the Panna tiger reserve, on the way to a village that is engaging weekly with our radio programme called Majboor Kiska Bola! (Who are you calling helpless!).

Funded by the Google Foundation, the programme provides listeners with information and inspiration about labour rights and bonded labour.

Indian legislation bans bondage and provides schemes to support the very poor. However, lack of information and unsympathetic gatekeepers mean that many of those most in need do not know their labour and land rights, or are unable to access their entitlements.

Suddenly, as we drove around a corner, we spotted the village, a collection of small houses. Passing the one-room school, the village also seemed fairly empty, but as we reached the top of the road we discovered why: most of the villagers were gathered on mats to listen to the latest episode of Majboor Kiska Bola!

'Listener groups' are a fairly well known way to deepen a project's engagement, by bringing a group of people together to listen to a programme and then discuss it. Plus, of course, it's the only way to reach audiences in ‘media dark’ places like this in Madhya Pradesh, where there is no radio and TV.

In this project, however, we have taken the concept a step further, expanding it to 'listener villages'.

Working with local non-governmental organisations, we have trained facilitators in each village, and provide them with a new programme each week on a memory stick, for playing through battery powered radio. 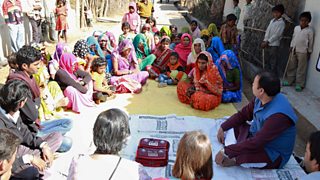 The facilitators aim to play the programme to at least half of the village each week, and in group discussions, encourage them to relate the content to their own experiences.

In this weekly session, we heard a drama, based on a real story, of a distraught woman whose husband had recently died. As she had no money to live on, she was considering suicide. I was relieved to hear she didn't take her own life, as she learned that she was entitled to a state pension.

As the story ended, one of the women spoke up to say that she had been widowed over a year previously, but still hadn't received her pension. 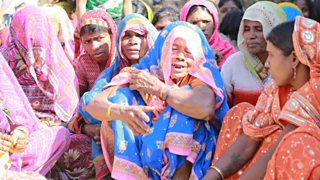 Then another woman, widowed a year and a half, and then another, alone for five years, were encouraged by their neighbours to speak up.

Gyanendra Tiwari, from our partner NGO Samarthan, wrote down their details to take with them to district secretariat.

Now, enlivened by learning that their elderly neighbours' lives didn't have to be so difficult, the villagers told us other stories.

From listening to Majboor Kiska Bola! they had learned about self-help groups, and organised one themselves, collecting a small amount of money from each member each month. These savings were distributed to whomever was most in need that month.

One family told us proudly that this money had enabled them to pay back a moneylender and get their land back, so they were no longer bonded to this man.

Another woman whose young teenager lay on a blanket outside her house told us that her child was disabled. After hearing a programming about the entitlements for disabled people, the NGO had helped her to apply for the monthly payment of 500 rupees, thus improving their quality of life.

As we prepared to leave the village, Gyanendra told me that his NGO Samarthan had previously come to the village to tell people about their rights.

But until they heard the radio programme, villagers hadn't connected with the issues emotionally, and recognised that there were 'people like me' who had both experienced bonded labour and escaped it.

They hadn't known about the minimum wage, so had worked for less than 100 rupees a day. Now they earn the national minimum of 146 rupees, because they demanded it.

Gyanendra told me that Majboor Kiska Bola! had given them knowledge, evidence that it works, and the confidence to work together to demand their rights.

But the day didn't end there. We then drove on to the Shrota Samvad or Listener Dialogue, organised by our team with the NGO in the town of Panna.

We're running a series of these listener dialogues across the three states in which we work, to bring listeners and government representatives together.

A panel of government officials sat on stage listening to the stories of their constituents, and advising or committing to action.

Listeners from the surrounding villages arrived on trailers drawn by tractors, some with bags sewn from cement sacks, some on crutches, others barefoot.

Attending the event meant a day out, but it also meant a day without income, as most are day labourers.

We had set out chairs for 400 people, but had to take two more deliveries of chairs to seat the growing crowds. I was later told that 1000 people attended this listener dialogue.

Villager after villager spoke directly to the officials, watched avidly by their colleagues and a considerable contingent of local media. 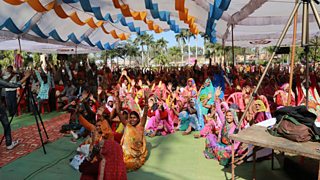 One of them was the woman from the tiger reserve village who had been widowed for five years. An official told her he would send his staff to the village tomorrow.

I've since heard from our team in India the applications for widow pension cards have indeed been filed for all of the widows whom we met that morning. They should receive them, and a new bank account (if they don’t have one already) in 30 to 60 days.

The widow's story was also featured in two newspaper articles on the day following the Listener Dialogue.

It was incredible to see such direct impact from listening to a story on our radio programme a few hours earlier.

My BBC Media Action colleagues were clear that we could not do this alone; our partnerships with Samarthan and other NGOs is fundamental to the success of the project. A radio programme alone would not have inspired people to take action, nor did an NGO working directly with the villagers.

Together, we are providing information and inspiration that enables and convinces the poorest people of Madhya Pradesh to take action to improve their own lives. Who are we calling helpless?!

Coming home for the first time