How effective is opposition politics in Sierra Leone?

Democracy has an interesting history in Sierra Leone. Only after the end of the civil war in 2002 did my country see elections which most people have described as fair. Party politics, meanwhile, is also finding its feet even though the two major parties were formed over five decades ago.

And that's why we decided to put the effectiveness of our only opposition party in parliament – the Sierra Leone People’s Party (SLPP) – under the spotlight in a particularly stirring episode of our radio debate programme Tok Bot Salone (Talk About Sierra Leone). 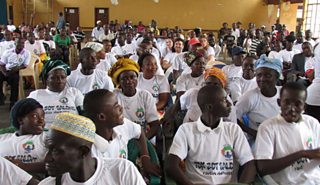 The crowd in Bo city hall for Tok Bot Salone.

To record the show, the Tok Bot Salone production team travelled to the opposition party stronghold of Bo, Sierra Leone's second city in the south of the country.

The city hall was packed with more than 200 people keen to voice their opinions to a panel which consisted of a local SLPP MP, a member of the ruling All People’s Congress Party (APC), a dean from Bo's Njala University and the head of a local women's forum.

"The opposition party is not very effective because it is divided," was the tough verdict on his own party from one of the invited guests in the audience, Councillor Harold Logic Tucker, the Mayor of Bo.

He was responding to the SLPP's internal wrangling since they failed to unseat APC in last November’s election. Their defeat at the polls also saw key party members crossing over to the APC’s benches. "If we want to be more visible and create an impact, we need to put our house in order," he said.

A supporter of the governing party, Mohamed Osman Kamara, meanwhile, spoke from the audience and accused the opposition of walking away from the fight: "If you are voted in parliament, as a Sierra Leonean your responsibility is to monitor the government’s day-to-day affairs. But when there are debates, you walk out of parliament. You abandon national issues all the time. It means you are not effective."

The local SLPP MP, Paran Tarawalie, defended his party’s right to pull out of debates if certain rules were not followed, and added, "No matter how effective our arguments are, at the end when we go to votes, we will lose because we are in the minority."

Sierra Leone is increasingly attracting foreign investors eager to have access to the country’s abundant mineral wealth. Recently, the president returned from a trip to China speaking of interest in land for farming.

However, questions have also been raised over large-scale land acquisitions by foreign companies and interests, and youth unemployment across the country is a big issue.

Many feel therefore that a strong opposition is needed to hold the government accountable to its citizens.

But during this Tok Bot Salone episode, supporters of the opposition party complained about the tactics which they claimed were used by the APC to silence and divide them.

Deputy Speaker of Parliament, Chernor Maju Bah denied accusations that the SLPP was being excluded from important debates: "When I chair parliamentary sittings, I give equal opportunity for all MPs to respond irrespective of their political ideologies." 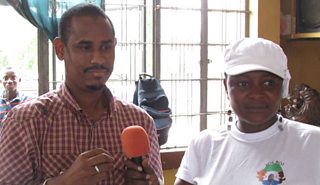 He added: "The opposition MPs should know that the minority also have their say in as much as the majority have their way in parliament. They should stop boycotting parliamentary sittings and represent their constituencies well."

Such fiery debates are set to continue in the next few months as the government opens consultation on a review of Sierra Leone's constitution.

There are inconsistencies that need to be addressed; clauses that some say need updating; questions answered about citizenship – particularly in relation to the significant Lebanese minority in Sierra Leone who don't have automatic rights to citizenship – and discussion of restrictive libel laws.

Indeed, our first Tok Bot Salone on the constitutional review has already happened and saw the audience interact with Sierra Leone's Attorney General Frank Kargbo and the Chairman of the Constitutional Review Committee, Justice Edmond Cowan.

Throughout the process, the Tok Bot Salone team will be right there with the people, engaging local audiences and getting their voices heard on the national stage.

A Girl Called Zaat: a TV drama for a turbulent Egypt