A man with a plan: using drama to tackle Ebola 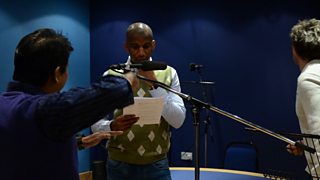 In the three countries most affected by Ebola, information and communication play an important role in curtailing its spread. There is a lot of information out there, from posters displaying symptoms, to celebrity-featured public service announcements and Ebola songs. In the early phases of the crisis, communication focused on the fact that Ebola is real was important when denial was a barrier. Now, there is a much needed emphasis on providing two-way communication and highlighting survival stories to address misinformation, hopelessness, fear and stigma.

But what other gaps exist in people’s knowledge or what else can communication do? How can communication motivate people to take action? Besides advising people on hand washing, much of the communication to date hasn’t been action-oriented, especially for those who haven’t directly been affected by Ebola. We wanted to change that. It was important to us that what we communicate is practical and actionable.

Much of the communication to date has focused on what not to do: don’t come into contact with sick people’s bodily fluids, don’t wash the bodies of your deceased loved ones and so on. It’s difficult to see what action you can take if you aren’t currently facing that exact situation. What should I do if no one in my family is sick, besides washing my hands constantly whenever I’m in public? Is there anything else I can do to prevent the spread of Ebola to protect myself and my family?

Ebola has created an emergency-like situation for communities at higher risk. In the event of an emergency, what are we always told to do? Whether we are airline passengers or live near an earthquake fault line, we are told to be prepared. To be aware of what we can do should something go wrong. To have a plan. Having an emergency plan helps people deal with difficult decisions that have to be made in the heat of the moment, decisions that are often made in the presence of fear and panic.

Our task was to build a convincing case for "having a plan" that could stop the spread of Ebola. Experts currently agree that at this time, communication efforts need to focus on two broad goals: promote the need to seek treatment as soon as an individual experiences Ebola-like symptoms and practice safe funeral and burial rituals. We want to encourage our audiences to have an emergency plan for their family where they know what to do should a loved one fall ill or die. We know these are difficult and often taboo discussions. Having a plan, we hope, will encourage families to feel more prepared and in control in these scary and uncertain times.

We decided to use the power of drama, because drama can portray the conflicts and challenges people are confronting when faced with Ebola. This was the genesis of Mr Plan-Plan, our main character. Mr Plan-Plan is an itinerant trader, a wise fool, who champions "having a plan". He presents stories of what he sees around him: families torn over what to do when someone falls sick, friends misunderstanding each other, relationships being threatened, emotions boiling over, communities fighting to hold on to tradition and rituals. In Mr Plan-Plan and The People, a series of six mini dramas, we see how a plan helps people navigate their way through Ebola.

Mr Plan-Plan and The People has been produced in three languages: French (Guinea), Liberian English (Liberia) and Krio (Sierra Leone) and will be aired over our network of partner radio stations across the three countries over the Christmas and New Year period. This is a particularly salient time given Sierra Leone has cancelled holiday celebrations to avoid further spread of Ebola. The drama is part of a BBC Media Action initiative to use media to reduce the spread of Ebola in Guinea, Liberia and Sierra Leone and to prepare ten neighbouring countries with training on media and communications.

The work is funded by the Paul G Allen Foundation.

A dramatic approach to Ebola