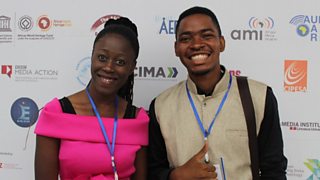 For 20 years, BBC Media Action has been supporting media freedom and providing training and mentoring to journalists in developing countries to produce free, independent journalism that provides space for constructive public debate.

For the recent UNESCO World Press Freedom Day conference (WPFD2019) in Ethiopia, we sponsored two youth delegates – Bwale Mutanuka from Zambia and Kefa Hussein from Tanzania – to take part in the Youth Newsroom initiative, which gives young journalists from around the world the chance to report on the conference and improve their journalism skills.

Bwale (left), from Zambia, is currently Chief Producer of a youth-focussed radio show called Ishiwi, supported by BBC Media Action. Kefa (right) is a Film and Television student from Tanzania who works as a ‘Young Professional’ for our vibrant youth radio programme, Niambie. They both kindly spoke to me about their experiences in Addis, what they learned whilst there, and why media freedom is important to them. Read on to find out more!

So, when did you both first know that you wanted to be journalists?

Bwale: For me, I’ve known since I was very young – maybe since fourth grade in school. I always thought I should be on TV reading the news or reporting from the field! I used to go around my school pretending to interview students, and took part in both press and debate club. My dad actually wanted me to study something completely different, but my mum and I convinced him that journalism was the course for me.

Kefa: My dream started when I was around 11 years old watching a Tanzanian kids’ news show on Independent TV – I wanted to be just like the young presenters! I auditioned for the show but sadly didn’t get through – however it sparked a passion in me and I took on every presenting opportunity I could find at school until I chose to study film and TV at university. 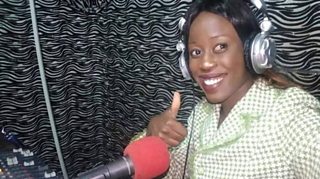 Bwale: Where I’m based in Chingola, we’re right in the middle of the Zambian copperbelt – so I find that I cover a lot of stories about the mining sector. Recently we had some peaceful demos by citizens who felt their water was becoming polluted due to mining activity, and some of their houses were getting cracks. The government had promised to support these communities – so it was interesting reporting on both sides to see how the citizens’ concerns were being handled by their leaders.

Kefa: My best story was when I shared the experience of a young girl living just outside of Dar Es Salaam and the difficult journey she faces every day to get to school. We followed her from the moment she wakes up (at 4am) and gets ready, through to her dangerous journey walking to school all alone along a very dark and busy road. The road is full of drunkards and ‘fataki’ (sugar daddies) who try to talk to the girls. There is a bus, but the conductors often refuse to let too many students board as they have to charge a lower fare. We also interviewed her teacher, and the piece really opened my eyes to the extra challenges girls in my country face just to get to school. 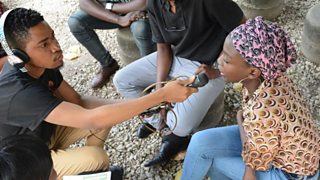 How did you get involved with BBC Media Action?

Bwale: I first heard about Media Action when I worked for Radio Icengelo, as the charity had previously helped the station run some audience debate shows. Then I started at Kokoliko FM and heard that we were starting a partnership with Media Action – I was really happy! Now I’m the Chief Producer of a youth radio show called Ishiwi, supported by the charity, which broadcasts every Saturday. I work with fellow young people to discuss and debate the important governance issues affecting young Zambians so they can know what’s going on and hold leaders to account. Media Action’s mentor, Vanessa, travels out to us from Lusaka to deliver all kinds of training – from editorial and production through to responsible social media usage, to make sure we’re properly verifying all our sources. She’s really helped me when it comes to objectivity, impartiality and transparency – and has helped me ensure I’m striking a good balance between female and male voices on the show.

Kefa: Well firstly, I was aware of BBC News and World Service. BBC Swahili is very popular here in Tanzania. I remember one day in my first year of studies, a friend ran up to me with an advert for Niambie he’d seen on Instagram. I’d never heard of the charity before but was curious to learn more, so did some research and applied! I was quite nervous at first that my English wouldn’t be good enough, as it’s my second language, but I got accepted! I started as a ‘Young Professional’ with Niambie in July 2017. My job is to help gather content from the field to include on the show, including creating some digital content for Niambie’s social media channels. When I started with Niambie I had no editing skills, but they’ve really grown a lot from working on the show. I enjoy it very much – more than university! When it comes to Niambie, this is the reality of what I want to do, you know? Meet real people, tell real stories, put my training into action. 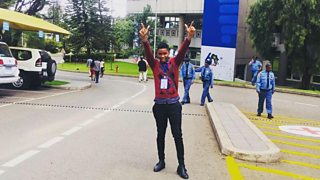 Kefa arriving at the conference in Addis Ababa (can you tell he was excited?)

Tell us about your experiences at World Press Freedom Day!

Bwale: There was so much! I was so grateful and humbled to be there. I learned a lot about development and the media reform process Ethiopia is currently going through – it made me think a lot about the state of media reforms in my own country. A big theme of the conference was ‘elections in times of disinformation’ – and with Zambia’s elections coming up in 2021, it reinforced how important it is for me to report in a responsible manner. Zambia has been a beacon of peace in Africa since its independence, and I want this to continue. So I need to report factually and recognise, and be sensitive to, the potential influence I have over my listeners. I also learned a lot from Kefa and really enjoyed hearing about his work with youth radio in Tanzania and the political situation there.

Kefa: Going to Addis was my first ever international visit! I have to say I initially found little things very confusing – such as the currency and the language – but the trip really exposed me to new people and new cultures. My favourite session was with the organisation Cartooning for Peace who produce satirical cartoons with political messages. It’s rare to find this kind of cartoon in Tanzania – not many people have the courage to draw cartoons that go beyond making people laugh to help people learn or address sensitive issues. I also really enjoyed the session on how to spot real versus fake news, and learnt useful techniques such as checking the author’s background and finding alternative sources. I learnt a lot of things for sure, and it was great to meet Bwale and discover the work she is doing with Media Action in Zambia. 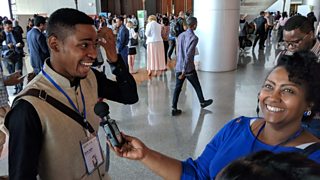 When the tables were turned! Kefa being interviewed about the importance of media freedom

Why do you both think media freedom is important?

Bwale: For me, media freedom is important because it means I can dig into a story without any interference from the government. I have no fear – I know I have the freedom to report and write what is right. I was really inspired at the conference by the journalists from Myanmar who won the Press Freedom prize – they encouraged me to be fearless in my reporting.

Kefa: I think media freedom is important in Tanzania so that people can consume news from lots of different sources and in lots of different ways – be it newspapers, radio or social media. We’re heading towards an election next year, and I think media freedom plays an important role in informing people and helping them to figure out for themselves which candidate is right for them. As a developing country, free media is also something we really need to be an informed society – media plays an important role in the development of my country.

What did you learn at the conference that will help you in your career? And what is your dream job in media?

Bwale: This whole experience has really encouraged me to have confidence in my ability as a journalist and to persevere in my career, even in the face of challenges. I always have more to learn! And my dream? I would love to be a news anchor on TV – I’m confident that if I continue working as a reporter I will get there one day!

Kefa: Well, I really now want to encourage all of my friends studying graphics and design to try including important messages into their cartoons! My dream? I want to be an influential person in my country – in fact, just like Salim Kikeke from BBC Swahili! He’s one of the most influential people in Tanzania and young people really appreciate what he is doing – the way he presents the show, his social media activity. He stands out from other journalists. And I want to keep supporting young people to participate in society through media. Young people make up almost 60% of Tanzania’s population. If you exclude them, you have no nation. 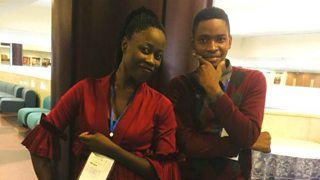 Bwale and Kefa posing up a storm at WPFD2019 (in coordinated colours, no less!)

To find out more about our work supporting media freedom and strengthening the capacity of journalists like Bwale and Kefa around the world, check out the media development section of our website.

“Climate change is about people”: TV to encourage action in Cambodia

Against all odds: female voices breaking the mould in Afghanistan