Using radio to respond to Ebola in Sierra Leone

For the past four years, the BBC Media Action team here in Sierra Leone has been building the skills of radio stations' producers and journalists across the country. We've trained community journalists on how to gather news, for example, helped them to develop new programmes and coached station managers on how to find new sources of revenue.

But never have we run a training workshop with such high stakes as the one we did this month. On 2 July in Freetown, we gathered together staff from 30 radio stations from across the country to learn how best to tackle the current outbreak of the Ebola virus. 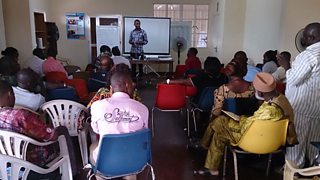 Since the first confirmed case in May this year, Ebola has dominated both daily headlines and everyday conversation in Sierra Leone. And as the deaths have mounted, so has the misinformation and fear.

For example, rumours have circulated that the virus doesn’t really exist, that traditional medication can protect you and even that it’s being used by the ruling political party to reduce the population in opposition areas ahead of the national census.

Despite the fact that Ebola is actually quite fragile – it can be destroyed by sunlight and bleach – people are afraid of taking public buses or sharing helmets when they're riding a motorbike.

Those lucky enough to survive the virus come out of hospital to find themselves and their families stigmatised while health workers have also come under attack from fearful people.

Our team in Freetown therefore quickly realised that we could help tackle such dangerous misinformation. We already had productive relationships with the radio stations and the right expertise and content at hand.

First, and after thorough consultation with health experts, we made sure that stations from across the whole country were represented at the workshop – including stations from the heart of the outbreak.

This proved vital: the first-hand experience of station staff from affected areas sparked off invaluable discussion about how to tackle stigma and effectively broadcast information.

We trained the stations in how best to reach out to their audiences, how to keep their messages consistent with health officials’ advice and the importance of using the correct languages for local audiences.

We also emphasised the need for stations to be very careful about who they invite to take part in live discussions or contribute as the 'studio guest' for phone-ins. They learned the importance of ensuring only experts take part to avoid the spread of misinformation.

In addition to the training, we distributed posters and eight radio public service announcements (PSAs) from the US Centre for Disease Control and Prevention, together with one PSA we had made ourselves. (Listen to the PSA on SoundCloud.)

Recorded in different languages, these PSAs provide information about prevention, symptoms and other issues – such as the importance of not eating bush meat – as well as addressing the stigmatisation of survivors and the myths surrounding the spread of the disease.

The feedback from those who attended the workshop has been very positive.

Station manager Foday Sajuma from Radio Moa in Kailahun told me, "We [now] do interviews to get the views of ordinary people about the Ebola virus and ensure experts respond to the issues raised by the people." In doing so, the station provides a platform to reinforce key messages about the disease and clear the air on the suspicions and myths held by many in the district.

We hope that with this workshop, we have made a small contribution in reducing the fear that has contributed to the spread of the virus. By providing people with correct, reliable information that people can use, that means people don't panic, that is critical.

Lifting the lid on dowry-related violence in Nepal