Abdurrasul Pamiri stunned the studio audience of our discussion programme Open Jirga when he revealed he had travelled eight days from the Pamir Mountains in northern Afghanistan to ask a question.

"Twenty kilometres on foot from my village to the Wakhan district," he explained, "And approximately four days of travel by horse and donkey to get to the Eshkashim district [the first district in the north-east that is connected by roads]."

He then embarked on four "days of travel by car from Eshkashim to Baharak [district] and from there to Faizabad [the provincial capital], then to Kabul". He carried his bed and food with him, travelling during the day and spending the night at mosques. 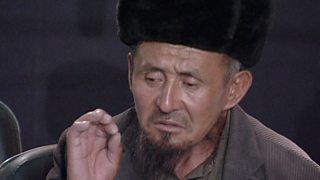 An ethnic-Kyrgyz Afghan, Pamiri wants the Afghan authorities to pay more attention to his community which lives in a remote corner of the country.  As he pointed out on the show, despite living in Afghanistan for centuries, “Afghanistan recognised us [as Afghans] only in the past five or six years."

Pamiri joined the studio audience – which hailed from 72 different districts and represented 17 ethnic groups – for an episode of Open Jirga that focused on the role of the Afghan national police (ANP).

After 13 years of sustained international investment in ANP amounting to billions of dollars, people wanted to discuss a wide range of pressing issues. These included the force’s long term financial viability once international funds dry up, whether the heavily armed police are in danger of being another army in disguise, and the accusations of corruption and abuse of children that plague the force. 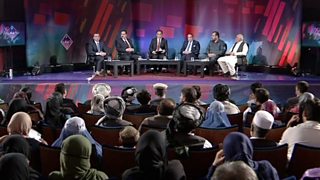 The panel who took questions from the audience were all high-level officials. In addition to the current head of ANP, General Mohammad Salim Ehsas, the line-up included three former ministers of the interior - Ali Ahmad Jalalai, Ghulam Mujtaba Patang, Faqir Mohammad Faqir - who were directly responsible for leading the police force, and the former intelligence chief Amrullah Saleh.

The sensitive question of sexual abuse was brought up by Mohammad Kabir from Sar-e Pul province in the north of the country. "Sexual abuse of boys is on the rise in Afghanistan," he said. "My question is to all of you authorities: what did you do during your term and … have you done anything conclusive to stop or decrease sexual abuse?"

The current head of police, General Ehsas was first to answer. He said, "There is no doubt, we cannot deny… the police is involved in some sexual abuse cases." He then told the audience the authorities "are confronting this evil phenomenon" and said that police had made "13 cases of arrest" related to sexual abuse when he was the head of security for Balkh province.

At this point Mohammad Kabir responded that abusers were often only arrested for fighting amongst themselves, rather than the more serious crime of sexual abuse. "When there is a disagreement among the people who are committing sexual abuse, they fight," he said. "[It's only] then the police arrest them." 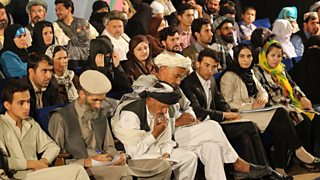 Former intelligence chief Amrullah Saleh, meanwhile, added his opinion: "Now, instead of recognising the police force as the only source for solving the problem of sexual abuse, one should ask why are the Uelma [religious scholars], who constitute a body that is five times larger than the police force, silent about this subject?" He said "the first institution that should rise against this evil phenomenon [should be] the mosque."

Pamiri – who travelled for so many days in such hard conditions – wanted to ask something even more basic. . "The police don’t spend more than two days in the Pamir [mountains] due to cold," he said, and asked for more attention to be paid to the very poor people living in his remote corner of Afghanistan.

Another member of the audience picked up on Pamiri’s comment and asked when and how Afghanistan would have a police force that was truly national in scope.

To which the head of the ANP, General Ehsas, replied, "It is true that all of the people of Afghanistan are waiting [to get a truly national police]. Our senior leaders in the interior ministry and his Excellency the President are working day and night to make sure our security forces are strengthened. In the last 13 years, we have had to start from scratch - a lot of positive work has already happened."

After the recording – and before he embarked on yet another arduous journey back home – Pamiri said, "My heart leaped with joy" at being able to share "my problems with government authorities!"