Whatever the weather: Radio helps people adapt to climate change 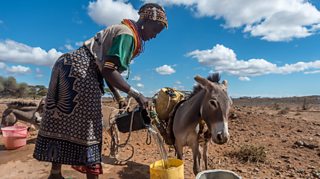 Pastoralist at a water point fetching water for her animals and domestic use, Marsabit County, Kenya.

As world leaders gather at the UN Climate Action Summit in New York, Diana Njeru from BBC Media Action Kenya explains how climate change is affecting people across East Africa, and how we’re supporting them to adapt through radio.

Here in East Africa, there is no doubt we’ve been experiencing more extreme weather events. In 2019 alone, Cyclone Idai in south-eastern Africa and drought in Northern Kenya have resulted in loss of livestock, damage to crops, and even loss of life.

According to the IPCC, there’s a high probability that we’ll continue to experience higher temperatures, more erratic rainfall, severe droughts in the arid lands, and rising sea levels along our shores. Our communities are not easily able to adapt, so these changes will have devastating impacts – particularly for the rural and urban poor.

These communities, which are often remote and hard to reach, need the knowledge and skills to build their resilience to climate change. That is where radio comes in.

I manage a project called Weather Wise through which we’re partnering with eight local radio stations to provide weather and climate information to farmers, fishermen and pastoralists whose livelihoods are most affected by climate change.

Formative research into our audiences’ knowledge and attitudes about weather and climate information revealed that they rely primarily on indigenous beliefs to predict the weather, but recognise that this is becoming less accurate as the weather becomes less predictable:

“In the old days, if you see the swallows migrating from the East to the West, it was an indication that the rains are about to come, but today, the swallows migrate anyhow, could be somebody disturbed their resting places and they flew off, you cannot use that to make any farming decisions.”  – Young farmer from Uganda.

Yet audiences are reluctant to give up traditional methods of forecasting in favour of more scientific approaches, which they say they don’t trust, understand, or feel meets their needs.

“The forecast is general; it does not have the information that we need. We want to hear a forecast talking about the winds that affect the fishermen, to see the forecaster showing us our islands and what is happening in there, not some map that is not specific to us.” – Fisherman, Uganda. 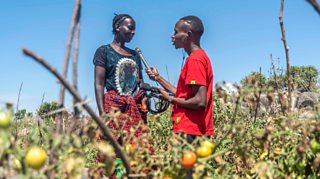 Producer Elias interviews a tomato farmer in Mwanza District, Tanzania, on how climate change is affecting her livelihood

We are training journalists to produce high-quality weather and climate radio content in local languages – including features, magazine programmes and bulletins – that is accurate, timely, relevant and useful for practical decision making.

But our work goes beyond training. We’re supporting journalists to interview members of their communities and set up radio listener groups, so they can hear what their audiences need and tailor their shows accordingly.

We’re also bringing together scientists and journalists who, historically, have had a hard time understanding one another – with journalists struggling to grasp complicated climate jargon and scientists worrying their information would be misconstrued. Workshops have built new relationships between scientists and radio producers, who’ve undergone training in how to produce weather and climate content with the audience at its heart. 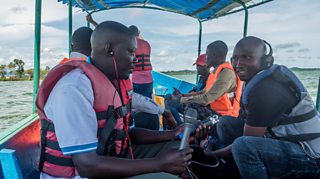 Although we’ve only scratched the surface, Weather Wise is starting to have an impact. Journalists from our community radio stations, who previously had little or no formal training, now report that they have an improved understanding of climate change and are more confident communicating it to their audiences:

"I have learnt the importance of thinking about the needs of my audience and how to equip them with practical information that they can apply in their day to day lives. As a result, I’m finding my work as a journalist to be more fulfilling now, as many listeners call me telling me how they are learning a lot from my programme and improving their lives." – Journalist, Radio Kwizera, Tanzania

Encouragingly, their listeners are already benefitting, too:

“In one of the programmes, they shared how the rains would fail and the different things we could do as farmers to cope including planting more drought resistant seed varieties. I planted these on my farm that season and was able to get a much better harvest than my neighbours’, most of whom lost all their crop.” – Female farmer, Masaka District, Uganda.

As for me, this has been an eye-opening project so far and I’m learning more about climate change and its impacts on the region’s poorest people every day. Because climate change isn’t just about the weather – it’s about people.

--
Diana Njeru is Project Director for our Weather Wise project in Kenya, Uganda and Tanzania.

Weather Wise is part of the Met Office’s Weather and Climate Information Services for Africa (WISER) project, funded by the UK Department for International Development (DFID).