Kenya flooding: why trusted media is essential in a changing climate

As the world grapples with COVID-19, a small rural community in Turkana County, Kenya recently faced another crisis: flash flooding. Local weather producer and BBC Media Action mentee, Vivian Achwa, shares her experience of meeting affected communities and seeing first-hand how the climate crisis continues even in the midst of a pandemic. 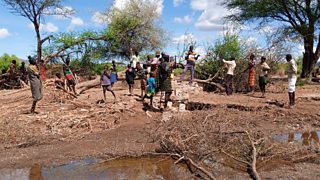 Nothing could have prepared me for what I experienced when I travelled to Kanukurudio, a small village in rural Kenya hit by flash flooding last month. Though I’d seen photos on WhatsApp of the havoc caused, it was only upon speaking to those affected that I truly understood its impacts.

I’m the producer at Radio Maata for a weather and climate programme called Nee Nikosi (‘Our Home’), broadcasting to pastoralists and farmers across the county. Every Wednesday evening, as they return from tending to their land and livestock, I share practical weather information about issues ranging from drought to the current locust invasion that is threatening our food supply.

Setting off before dawn, it took me four hours to reach Kanukurudio from our base in Lodwar. I had hired a four-wheel drive to navigate the rough terrain – crossing flooded rivers and dykes along the way. 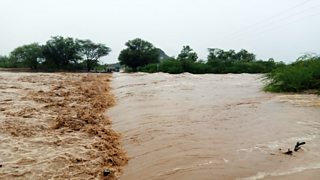 When I arrived, the sense of grief in the community was palpable. There were animal carcasses everywhere, and some of the villagers were already butchering them so they wouldn’t have to go hungry. The village water pump had been destroyed and household utensils and belongings lay strewn on the ground.

Most people in Kanukurudio are pastoralists who depend on their animals for their livelihoods and as a source of food during drought. Coming from a farming community myself, I understand the deep pain of losing animals. Interviewing the members of the community when emotions were raw was tough, and I tried to be as sensitive as possible with my questions.

One interviewee stood out to me the most. Mzee Naree Lomilio is a father of eight who lost 150 goats in the floods. His wife was also swept away, but thankfully survived by holding on to a branch for hours until the villagers found her and pulled her to safety.

“The floods caught many of us off guard. They began like the usual rains but continued pouring heavily, with most of us ending up stranded with our livestock in the field. We usually keep our goats at home in the kraal (enclosure), but they too were washed away,” explained Mzee Naree. 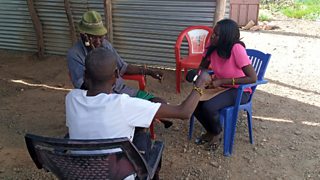 At this point, Mzee Naree began to cry. “This is too much,” he said. “I would rather die than live like this!” His community rallied around him to offer support – summoning the strength to offer him comfort despite contending with their own grief.

“If only there was a way we could have known the floods were coming, we would have been better prepared,” Mzee Naree continued.

According to local authorities, more than 472 people were displaced by the floods – with many people in the area requiring food, water and support to rebuild what they lost.

But another huge challenge facing villages like Kanakurudio is a lack of access to media. No radio stations, including my own, reach the region, severely limiting access to timely and practical weather information which could have helped people like Mzee Naree to prepare.

This is why BBC Media Action is providing wind-up and solar-powered radios, with several pre-recorded programmes loaded on to memory cards, to improve community access to, and understanding of, weather and climate information. Understanding threats, and what actions to take to minimise risk, can save lives and livelihoods. 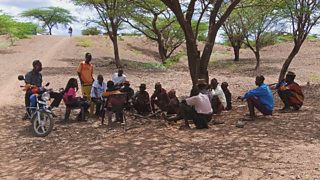 Vivian interviewing members of the community in a safe area

My experience travelling to Kanakurudio was deeply moving, and speaking to affected people helped me learn more about the local community, their farming techniques, and what information they most need – all of which I will apply to my show.

I dream of a time when people like Mzee Naree need not worry about crises such as flooding. But the weather in Turkana is becoming increasingly unpredictable and putting more and more lives at risk. I am determined to continue supporting people like Mzee Naree through my programme – helping them to adapt to a climate that’s changing so quickly around us.

In May 2020, we were delighted to announce the launch of a new climate project in the Horn of Africa called DOWN2EARTH, which will build on the success of Weather Wise and our established media partnerships in the region.

COVID-19: We're in the response for the long haul