COVID-19 in Iraq: How public interest media can save lives

A pop song about protecting yourself from COVID-19 is blaring from loudspeakers in a hospital in Baghdad and has racked up over 9 million views on YouTube. The public interest broadcaster behind it, Al Mirbad, is a rare and trusted voice for news and information in Basra – read more about its vital work during the pandemic from our Iraq country director, Abir Awad. 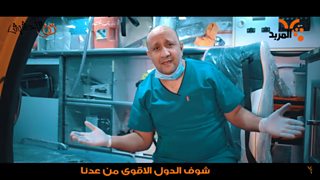 Still from an Al Mirbad video skit about COVID-19

Iraq was just registering its first handful of COVID-19 cases when Al Mirbad’s Editor-in-Chief was approached by Dr Abbas Timmimi, Director of the Basra Health Department.

He felt warnings about the approaching pandemic were not being taken seriously enough – by the public, and also by the central government, which had not enforced border closures with Iran due to a fear of backlash from Iranian-backed militias, even though Iran was one of the worst affected countries at that time.

Al Mirbad is a household name in Iraq, renowned for providing impartial and accurate news, investigative journalism, political satire and social content to its ever-growing audiences on radio and digital media since its founding by BBC Media Action in 2005.

With 48% of adults in Basra being regular Al Mirbad consumers, and with Basra being one of the provinces worst affected by COVID-19, the broadcaster is uniquely placed to help people survive the pandemic and cope with its repercussions on daily life. And true to its reputation, Al Mirbad’s reporting from the border crossing with the Director exposed the issue and led central government to finally close the border, helping to limit further spread of the virus in Iraq.

Since then, Al Mirbad has worked closely with health officials to host a regular slot with experts, providing clear advice on a range of topics including self-isolation, how the virus spreads, and testing, as well as debunking misinformation around herbal remedies and helping to counter rumours that cause public harm. When much of the Iraqi media fell for false claims that a company in Suleimaniya has developed a cure, Al Mirbad held back, chose not to run the story, talking instead to the WHO representative in Iraq to set the record straight.

A key component of Al Mirbad’s work is producing hugely popular satirical skits intended to reach wider audiences, including those turned off by traditional news and information. Our previous research shows the skits have led to strong attitudinal change amongst audiences across Iraq, and our hope is that this trend will continue for its latest skits relaying critical information about COVID-19.

For example, this is Al Mirbad’s take on an Egyptian pop song, using new lyrics to explain the need for a lockdown and support the medical and security services. The song features Al Mirbad’s well-known actors, alongside medical teams, police and security forces in Basra. It has already exceeded 9 million views on YouTube, and has been played on loudspeakers in hospitals in Baghdad to boost morale:

The pandemic came following months of public protests against unemployment, corruption, poor services and dismay with the country’s political system. There was already boiling frustration amid large numbers of unemployed youth, many of whom had settled in makeshift tents in large protest hubs in Baghdad, Basra and other southern cities.

Al Mirbad designed another online skit to engage specifically with them – using rap to champion staying at home and encourage social responsibility. The song plays out counter-arguments to common reasons for defying curfew, such as feeling trapped, and argues that staying home is the responsible choice, rather than caving in and giving up on protester’s demands.

Al Mirbad plays a critical role in holding government to account in a country still struggling in a shaky transition to democracy. As such, Al Mirbad’s job is to be critical and challenging towards public officials. But public interest media also has a critical role to play in communicating health information in a crisis so that people can make decisions to keep themselves and their families safe and healthy. As Dr Abbas puts it:

“Without Al Mirbad and especially without Qif L-Tahshish [the social media skits] we would not have been able to reach the public with critical communications about this crisis.”

Our project supporting Al Mirbad is currently funded through a grant from the EU.

The original video skit with Arabic subtitles is available to watch on YouTube here.

To find out more about the importance of public interest media around the world, and a proposed solution to the crisis facing independent media, read this new Feasibility Study for an International Fund for Public Interest Media.

Using my voice: radio for equality in Bamyan Province

Broadcasting from the basement: supporting Afghan audiences during COVID-19