“Our forests, our future”: Inspiring climate action in Indonesia 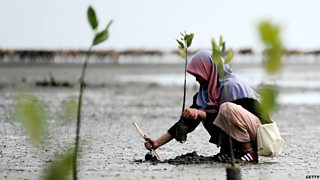 I’m certainly not the first person to say that media has enormous power – both to reach people far and wide, but also to help us understand, discuss and inspire action on the most important issues facing the world today.

At a time when media is often co-opted and used to spread disinformation, there is a huge need for trusted media to play an educational role in society. And, for me, there’s no bigger problem that media can help us understand than climate change.

For too long, the conversation around climate change has focussed on science, policies and governmental commitments. People’s lived experiences of extreme weather exacerbated by climate change have been missing – especially those who feel the impacts most.

At BBC Media Action, we believe that addressing climate change requires action at all levels of society, and that media has the power to bring together ordinary people, civil society, and leaders to discuss sustainable development that benefits everyone.

Our Indonesia project aims to do exactly that.

Indonesia is one of the world’s largest greenhouse gas producers, with the vast majority of emissions stemming from forest destruction and degradation. The Government has pledged to reduce these emissions; having an engaged public that cares about their forests and holds their leaders to account will help ensure these green commitments are fulfilled. 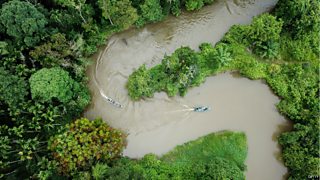 From our previous work in Bangladesh and Cambodia, we know that media can inform and educate audiences affected by changing weather, inspire individuals and communities to take action to protect their lives and livelihoods, and prompt governments to respond with policies for more sustainable development.

Our challenge in Indonesia is to engage an audience which doesn’t currently feel close to the problem: young people.

Around the world, we’ve seen young people lead the way when it comes to taking action on climate. Youth will make up an estimated 44% of Indonesia’s population by 2030, and there are encouraging signs that they could follow that path too. But our initial research shows us that this largely urban population doesn’t connect with forests or understand how deforestation affects their daily lives. They also don’t know how they can get involved.

Our first task will be to grab their attention – young Indonesians are huge consumers of social media, particularly on mobile. So our project will be ‘digital first’, challenging us to create high-quality, viral content that can cut through a sea of competing information to inform, entertain and inspire young audiences about their environment and the future of their planet.

To do this, we believe a sense of identity is key. Young Indonesians care about what their peers think about them and crave their respect. If we can create a culture of “green kudos” among friendship groups, and make it ‘cool’ to care about the forests, we could spark a generation of young Indonesians who actively engage with their leaders on sustainable development. 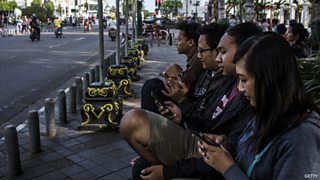 Young Indonesians on smartphones in the country's capital, Jakarta

This engagement cannot be tokenistic, which is why we’ll be backing up our digital content with a high-quality TV discussion programme and a challenge-style reality TV show. These will provide young people with the tools to understand how climate-related issues, such as air pollution and water security, affect their lives, and how they can engage with leaders on these issues.

Overall, we know this is a formidable task. But we also know from our charity’s work over the last 20 years that trusted media provide space for constructive public participation and debate – something which is much needed when it comes to climate change.

People need to be at the heart of the response to climate change. By encouraging people to work together, media really can change the world for the better.

Our work in Indonesia is funded by the Norwegian Agency for Development Cooperation.

Bridging divides: Radio and TV as a force for good in Myanmar