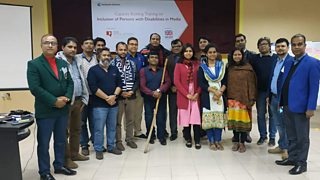 This week sees the launch of Inclusive Futures. BBC Media Action joins disability and development specialists, and global leaders from 15 organisations coming together under one initiative. The goal is to ensure opportunities for people with disabilities and a future that’s disability inclusive. In Bangladesh, our journalism mentors Senjuti Masud and Bishawjit Das have been training journalists to improve how people with disabilities are portrayed in the media and tackle negative stereotyping and perceptions. Read their story…

“The way people with disabilities here are being portrayed in the media is from a lens of pity or sympathy,” Senjuti explains. “So, when employers are looking at them, they’re looking at them as a burden to the society, not good enough, not capable enough to contribute to the economy. This is what we want to challenge.

Through our training of media professionals, BBC Media Action shows journalists that disability inclusion widens the scope of their story. It gives another dimension and it presents your subject in a more positive way.”

Senjuti and Bishawjit are training around 150 journalists from all different formats: television, radio, online and print. “They are senior journalists who’ve been working for a while. They know what they’re doing; we are trying to adjust their lens a little bit so that they have this fresh perception about telling the story from a different angle. So far, stories focus on a very pitiful situation and deplorable conditions of people with disability,” Senjuti continues.

Bishawjit explains what is involved in the training. “We bring the journalists together in a room with a group of people with disabilities, so they learn from each other’s experiences,” he says. “We ask the journalists to write an inclusive story… The interesting thing is: not only do the other journalists analyse it, but we ask the people with disabilities to give their feedback by asking: ‘How does it sound to you? Is it really dignified enough?’ 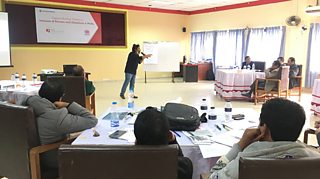 Senjuti adds, “We want to show that people with disabilities are an asset and they deserve equal dignity. And when media professionals are presenting them as part of their stories, whatever they’re talking about in media, be it an issue of public interest, economy, growth, the current political situation, they need to be included everywhere. Their voices need to be heard everywhere.”

“We have trained 150 journalists so far and Bangladesh is a country of thousands of journalists. I am proud that BBC Media Action has been part of this new initiative and journalists who were part of it have appreciated this effort so much. I hope more journalists will be able to reach more people. This is just a beginning.”

Bishawjit comments that “Since the training, we’ve noticed some of the journalists are already writing positive stories including people with disabilities. If you analyse the pre-training and post-training news, you will see a huge difference.”

“We saw the language being changed,” Senjuti adds. “I think it’s an amazing change to achieve in such a short period of time.

“Now we are creating a Facebook group where the journalists can talk about stories, to push them to keep talking about people with disability in a more engaging and interactive way. And there’s a little element of competition of who’s the best at making a change to the coverage – we’re going to declare them as champions.”

As part of the mentoring, Bishawjit and Senjuti offer a refresher training session with the journalists a couple of months later, as Bishawjit puts it…

“It’s to see whether they have forgotten anything…I’ve said to them: ‘I want to see at least 50 quality stories that would change the perspective of the audience!’”

BBC Media Action is one of 15 partners working together on Inclusive Futures which is supported by Sightsavers and funded by UK Aid. Learn more at the new website here: www.inclusivefutures.org

The original interviews above were posted by SightSavers here in June 2020, read the full article here or listen to a short audio interview with Bishawjit here as he joins other citizen reporters working towards a more inclusive future.

How coronavirus changed media training in Sierra Leone - for good

Conflict, flooding and now coping with the COVID-19 pandemic in Somalia