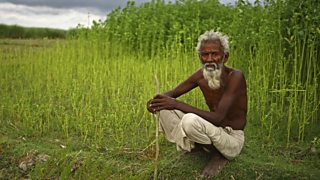 When I was invited to speak on a panel at a UN conference on climate change in Bonn, Germany, I wasn't sure what to expect. I envisioned a large, dimly lit amphitheatre filled with diplomats in dark suits, whispering to their colleagues between reading their official, pre-prepared statements out loud.

I was pleasantly surprised. I was there to speak at the 2nd Dialogue of Article 6 of the United Nations Framework Convention on Climate Change (UNFCCC). While that may sound terribly formal and bureaucratic, it was anything but.

Article 6 is all about how best to promote public awareness, public participation and public access to information around climate change – in other words, how to communicate climate change effectively.

The Dialogue provides a regular forum for stakeholders – government and global civil society representatives alike – to exchange ideas and experiences regarding the implementation of Article 6.

And a dialogue it was. An informal, personal tone was immediately set by the Chair of our panel, Paul Watkinson, who is co-facilitator of the 2

Dialogue. He began by encouraging us to have a real conversation – rather than a series of positions – and to avoid jargon. He also asked country representatives to use their first names, not their countries, when speaking.

Above all, he reminded us that Article 6 is really about understanding the effect of communication on people’s lives. The discussion that ensued centred very much on sharing good practice on climate change communication – what’s worked for different governments and NGOs as well as what challenges they've faced and how we could learn from each other.

There were several young panellists who talked about how to mobilise young people to address the challenge of climate change, whether through peer-to-peer meetings of university students across the globe, social media, or through video competitions.

Representatives from the governments of Africa, Asia and Latin America showcased innovative techniques for promoting understanding of climate change such as education programmes aimed at young children that use music, or engaging the private sector to provide incentives for things like rain water harvesting.

I was there to speak about the role of media and communication in facilitating climate change adaptation – how people can lower the risks posed by the consequences of climatic changes - drawing on our new policy briefing From the ground up: Changing the conversation about climate change.

The policy briefing uses data from BBC Media Action’s Climate Asia project to underscore how climate change is perceived by those hardest hit by changes in temperature, rainfall and extreme weather and its impact on their daily lives: their income, their health and their livelihoods. 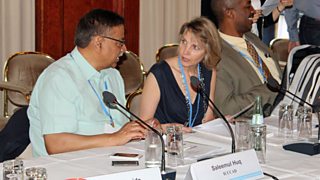 I emphasised how important it is to build an evidence base around these threats to food, water and energy security and suggested how media and communication can be usefully deployed to help communities build resilience to them.

I was really pleased to see how much the central thrust of our findings was echoed in some of the comments made around the room.

Saleemul Huq from the International Institute for Environment and Development pointed out that we don’t need to present the developing world as victims. He referenced some of the major successes the government, media and non-governmental organisations in his native Bangladesh have had in building climate change awareness and adaptation, and the need to disseminate and learn from these solutions.

A representative from Ghana, seated in the audience, talked about how much we can learn from the health sector in terms of marshalling media and communication to climate change adaptation strategies.

A panellist representing the St Lucia government, Crispin D’Auvergne, noted the importance of framing climate change initiatives in a way that address people’s everyday concerns – such as their health or jobs – rather than ‘climate change’ as an abstract, scientific issue.

Reacting to the different speakers around the room, the panel chair Paul Watkinson repeatedly emphasised the need to keep the focus on adaptation and vulnerable populations.

As he noted when wrapping up the session, “This is about people.” I could not agree more.