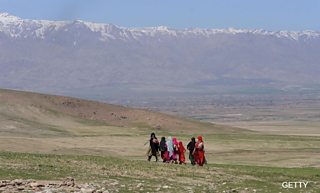 Nomadic people on a road north of Kabul.

In the spring of 2018, I paid a visit to a remote village of Afghanistan. As part of the villagers’ hospitality, I was served a warm cup of green tea along with some homemade cookies, and at first I was captivated by people’s stories about their culture and traditions.

Then, someone placed a large steel kettle, known in Afghanistan as a samovar, onto the fire to brew more tea. I was distracted by its NGO logo. Where did they get this samovar?

With a slight smirk, the villagers replied: “This was donated to us by an NGO for handwashing. We converted it into a samovar.”

My initial reaction was to contain my laughter at their cleverness, converting a portable sink into a samovar. But then my laughter turned into sadness at the outcome of the NGO’s efforts. They had spent so much money and effort, and in the end, their resources were not used as intended. They had not had the lasting impact they had hoped for.

I have been a humanitarian worker for the past eight years, leading various projects in providing basic water, sanitation and hygiene (WASH) services and working on hygiene behaviour change in Afghanistan. What I have personally observed over the years is that, despite the prolonged presence of international humanitarian organisations, many have struggled to achieve the goal of sustained hygiene behaviour change.

This is because many WASH projects focus on providing services, rather than focusing on behaviour change from the very start. They may also focus on the idea of access to water, sanitation and hygiene as being the main outcome of their work, rather than a path to other benefits.

Awareness campaigns need to explain the health benefits, and promote these ideas in a way that results in people changing how and when they wash their hands. They will not work if they impose theories that do not consider the context, or the importance of hygiene in Afghan culture, religion or tradition at the most local level.

What I have observed over the years of working on hygiene behaviour change projects is that to obtain long-term impact, you must:

I am now working with BBC Media Action to begin implementing a Hygiene Behaviour Change Coalition project, funded by UK Aid and Unilever, focused on changing hygiene behaviours, including encouraging handwashing with soap, to help prevent the spread of COVID-19.

The project targets two high-risk and under-served groups in Afghanistan, the urban poor and the nomadic Kuchi people. We will reach these audiences through radio and television public service announcements, and ‘fast fiction’ format storytelling rooted in local culture and tradition.

To start off this work, we have cast Mamnoon Maqsoodi, one of Afghanistan’s most famous cinema and theatre artists, to voice the first round of our TV and radio PSA campaigns. His famous voice is known to nearly all Afghan people.

We know that the majority of advertisements and PSAs use formal language and an official tone to convey their messages. We have taken a different approach, using colloquial language and a more informal tone that will resonate with our audiences.

To build our PSAs, we have undertaken a full behaviour change approach. This includes formative research, multiple workshops including the development of a theory of change, and multiple pre-tests of our content to ensure it will be effective as communication for behaviour change.

So enthusiastic was Mr Maqsoodi in embracing his character that he insisted on bringing a portable sink into the recording studio, to capture the realistic sounds and feeling of handwashing as he explained how to wash hands with soap to help fight the virus.

“This is so refreshing, to convey a message in this manner, which any Afghan will understand,” he said.

BBC Media Action will work in Afghanistan and Somalia with the Hygiene Behaviour Change Coalition until July 2021. Our aim is to focus on hygiene behaviour change that will support people to better protect themselves against COVID-19, and contribute to better health for themselves and their families. Some 80,000 children under five die each year in Afghanistan – and an estimated 12% of those are from diarrhoeal diseases, which can often be prevented with good hygiene including handwashing with soap.

It is my hope that this campaign, deeply rooted in local culture and tradition, will be the start of longer-term change in hygiene practice, and better health for some of Afghanistan’s most vulnerable people.

A tale of two crises in Nepal