As Libya struggles with conflict and instability, gender inequality persists. Cycles of violence and foreign interference are badly weakening chances of durable peace, leaving Libyan women particularly at risk. And harmful stereotypes remain about women’s participation in society and their ability to contribute to a sustainable peace.

Recently, Hanan El Baraasi, an outspoken Libyan lawyer and activist, was murdered in broad daylight for her activism in Benghazi. El Baraasi lost her life for being a vocal activist criticising corruption in Libya. Yet upon her death, many Libyans argued that she should not have challenged male leaders and that as a woman, she would have better off at home taking care of her family.

These harmful societal attitudes and social norms continue to hold women in Libya back. They need to be addressed so that everyone can contribute to the country’s development; Libya’s prosperity depends on it. Feminist activists and media can play a crucial role in highlighting the values of gender equality, which can change people’s mindsets in the long term.

Through the ‘Empowerment and Equality’ project, funded by the Dutch Ministry of Foreign Affairs, we brought media and gender experts together for constructive discussions about gender equality in Libya. A hybrid of on-site and online trainings brought together nine Libyan journalists working with BBC Media Action, and 11 representatives of Libyan feminist civil society organisations. This training equipped our team with the skills to create gender-sensitive content, and enhanced feminist organisations’ understanding of media and communication, to help them communicate with media outlets more effectively. 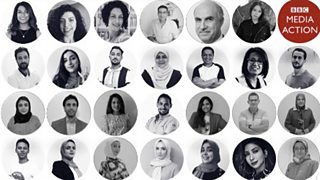 Participants, trainers and organisers of our gender and media training

After the training, and in line with the 16 Days of Activism campaign, we published a story produced by our Benghazi-based reporter, Abdulmunsef Adam, with the support of Jurists Without Borders in Benghazi. The story was about Aisha, a housewife from the south of Libya who started a peace initiative between two dominant and fighting tribes: Awlad Suliman and Ghadadfa.

Aisha is from the Awlad Suliman tribe and her efforts followed many failed attempts at peace-making led by men. As a result of her peace initiative, conflict between the two tribes has diminished.

The story reached over 210K Libyans, 48 per cent of which are women, and generated many positive engagements. One of the comments said, “May God bless you and may He reward you for bringing these two tribes together and stopping the killings… You are the pride of the Suliman’s tribe and the pride of Libya, a true ambassador of peace.”

Another said: “May God bless you and all the sisters who have cooperated with you and helped solve this dilemma. Libya is a land where honorable men and women are born.”

Through this story and others like it, El Kul highlights women’s contributions to society, and helps change negative attitudes.

Our research shows that our content has identified fundamental issues of concern, and has resonated with audiences. According to an e-survey, 20 out of 21 respondents agreed that the video encourages women to contribute to peacebuilding. Twenty respondents also agreed that the video promotes the active participation of women in their communities, and demonstrates that they have proven themselves successful in helping to build peace.

Although projects like this can help bridge the gender gap, we know that gender inequality persists. Women and girls continue to struggle with discriminatory laws and social norms. They face real challenges in making decisions for themselves, having equal access to the job market, getting involved in leadership positions and in some places, even enjoying freedom of movement. And, of course, many cannot even live free from violence.

Our efforts to end inequality must continue, to build a safer world for girls and women to realise their rights and contribute to their societies.

Handing the microphone to Afghan women