Head of ICT in India for BBC Media Action 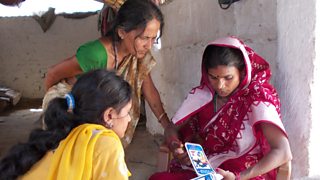 I’m exhausted, on the verge of illness and other members of BBC Media Action’s India office are also very, very tired – but – we’re all excited!

Why? Because in the last month, the Ministry of Health and Family Welfare in India has delivered maternal and child health mobile phone content developed by BBC Media Action to more than 260,000 families.

The Ministry, in close collaboration with BBC Media Action and with the support of the Bill & Melinda Gates Foundation, is rolling out three of BBC Media Action’s maternal and child health mobile services nationally.

Kilkari, BBC Media Action’s mobile messaging service for pregnant women and mothers, is being piloted in India's Hindi-speaking belt as part of a national scale-up by the government.

At scale, the services could reach an estimated 10 million families and 1.1 million frontline health workers across the country. This will be made possible because the ministry is using its Maternal and Child Tracking System database (MCTS), where the majority of pregnancies and births in India are registered, to identify women with valid mobile numbers to receive calls.

BBC Media Action, in collaboration with the Grameen Foundation and with support from the Bill & Melinda Gates Foundation, is now working to enable the software – including the back-end platform which is called Motech – to handle calls to and from 35 states in India.

The three services were developed under the Bill & Melinda Gates Foundation-supported Ananya project in Bihar. Mobile Kunji and Mobile Academy have already been extended to the state of Odisha with support from state government and UK Department for International Development, and to Uttar Pradesh, with support from the state government and the Gates Foundation.

You can read more about our journey, and the challenges we faced in the development of Mobile Kunji in a special issue of the MIT Innovations journal, launched in Cape Town, South Africa, yesterday. The journal also contains an article I co-wrote on the importance of making content local – based on our experience of developing Kilkari content for low-income, low-literacy women in Bihar.

In the Ebola crisis, information is aid

Powerful and trusted: why radio is needed to fight Ebola