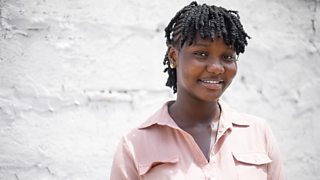 “The best person to advocate for a girl is the girl herself,” says 16-year-old Tamu in Sierra Leone.

Tamu is co-presenting on a special episode of BBC Media Action radio programme Wae Gyal Pikin Tinap (‘When a Girl Child Stands Strong’) to mark International Women’s Day 2021. The episode looks at this year’s theme - #choosetochallenge - through the eyes of girls: how girls see inequity in Sierra Leone, which everyday difficulties and imbalances most affect them, and how they would like those around them to stand with them on calling out these issues.

As a guest co-presenter, Tamu works alongside the show’s regular presenters, conducting interviews, helping to choose guests and introducing themes and segments.

Life can be tough for girls in Sierra Leone, who tend to have lower school attendance and higher drop-out rates than boys, as well as a high incidence of early marriage and early pregnancy.

The girls talk about inequality in education, where girls are not sent to school as frequently as boys, and the distribution of household chores which tend to fall to girls, as well as more serious issues like rape and early marriage.

Some girls in Sierra Leone say they don’t feel able to talk about inequities and challenges with adults around them. But in her role as co-presenter, Tamu encourages girls to find their voices and speak out, and calls on others to stand with them against inequality:

“If you try to advocate for yourself, then other people can come and help you. We can’t stand up on our own – we need everyone to stand up with us. But if we girls just sit back, people will think that we are okay with what is happening to us - when in reality we are really not okay.”

When a girl stands strong

Tamu is the latest young co-presenter in BBC Media Action’s girls’ empowerment radio show. Produced nationally, and broadcast weekly on over 60 radio stations in Sierra Leone, Wae Gyal Pikin Tinap is the show which sees the world through the stories and experiences of girls.

It aims to create a more positive and supportive environment around marginalised girls in Sierra Leone – particularly those who are not in education - by showing audiences what girls can achieve when they are valued, listened to, encouraged and given more equal opportunities. 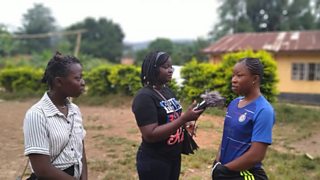 It is a girl-led, girl-centred format that marks an innovative new approach to girls’ empowerment. “As a young girl, I wanted my voice to be heard,” says 17-year-old Mary, another recent co-presenter.

“Society thinks that it’s best to make decisions for us - but it’s the opposite. I hope parents, caregivers, and society listening to the programme will change their mindset about girls and will give girls the right and chance to make decisions.”

Wae Gyal Pikin Tinap focuses less on problems and more on solutions – including ideas and solutions which girls have found for themselves. The approach is changing the way girls are seen in their families and communities.

“Whenever I listen to the programme, I call to other children around the community - not just my daughter – to come and listen to the stories of their colleagues,” says one mother in the rural district of Kono. Her own teenage daughter has dropped out of school, but she feels inspired by the girls voices she hears in the show. “I love the program as they interview girls to tell their stories,” she told the BBC Media Action research team.

Choosing to challenge – by girls for girls

A father who listens to the programme calls his teenage son to join him when the show comes on: “The children they use to participate on air are very bold and I like that a lot. In fact, I use that to motivate my son. The most interesting part of the programme for me is when they involve the kids in it. It is very important, and it is a motivating factor for most kids around the district.”

As well as the national show, BBC Media Action journalism mentors are also training and supporting 18 local radio stations to produce their own local versions of the show – with the aim of showcasing local examples, services and solutions to help generate and spark community discussions around the issues raised.

It’s a first step towards changing the media culture in Sierra Leone, to put more voices of women and girls on air - and to allow girls themselves to lead discussions around girls’ empowerment.

For the girls who have taken part in the programmes, it already feels like that change is happening.

“Being on Wae Gyal Pikin Tinap was like being part of the new era already unfolding - and it felt great!” says 19-year-old Millicentia Boateng, another previous co-presenter. “Discussing girls’ issues is an inspiration especially to myself - to do more, live more and inspire more. I hope people who've heard me on the radio look at things from my eye’s view and protect girls.’’

Wae Gyal Pikin Tinap is part of the EAGER project – which is funded by UK Aid from the UK government. Learn more about the project here. 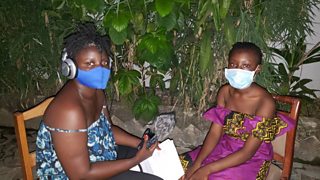 (L-R): Marian Tina Conteh, presenter of Wae Gyal Pikin Tinap, with 13-year-old Aminata - a student and musician. This photo was taken in Kono.

Handing the microphone to Afghan women