Earlier this year I blogged about the school children in Jonglei state who were forced mid-exam to flee to the bush in fear of their lives.

That was just the start of the widespread fighting that has since led to a severe humanitarian crisis in this country. States that were spared violence are now home to thousands of people displaced by the conflict, many living in camps. They are short of food, health facilities and clean drinking water. Added to this, parents are particularly worried about their children’s education.

As part of our radio programme Our School we have been finding out how schools in relatively peaceful parts of the country are coping with displaced children.

“All children are welcome here to learn and get educated,” says Bernard Ladu, Head Teacher of Gumbo Primary School in the country’s capital Juba.“In these children, we have doctors, teachers and all. It is in them that we have resources for South Sudan.”

Gumbo School has seen an influx of children. They are allowed to enrol even if their parents can’t afford to pay their school fees, a policy that has been embraced by many other schools across the country.

“We consider the child to be the centre of our interest, we don’t mind much about the school fees, uniforms or shoes,” says Alex Esau of Yambio Primary School in Western Equatoria. “We do this in order to build unity and to see that we are one South Sudanese and one nation.”

This policy of inclusivity means that new friendships are also formed.

Eleven-year-old Ajok is from Jonglei State. She says that when she fled the state capital, Bor, with her family, she worried she would not find new friends.

“When I came to this school, I was scared. I just see different children who I didn’t know. I used to walk alone in fear,” she told our producer. But then Ajok met Gloria, a 14 year old local girl. 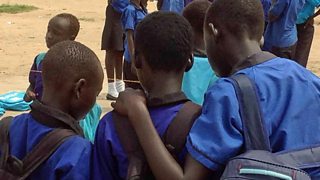 “Every morning, she comes to me and greets me before I could even know her. Then I decided that she can be my friend because of her kindness,” says Ajok, “I admire her kind heart.”

Gloria says she became friends with Ajok because “she doesn’t fight or insult other people. And now we are not thinking about which tribes we came from. We are staying like sisters”.

Gloria and Ajok walk to school and study together, eat breakfast together, and relax together. Ajok even taught Gloria some of her local songs.

Schools have no tribes

For many parents, fleeing fighting was made even harder by their worry about their children’s schooling. Akol Bol moved his family from Unity state to Warrap state, leaving all his official documents behind.

“Since we came here, my daughter was accepted without a report card because it was lost during the fighting in Unity State,” he says. “She tells me now about the support she gets at school. She said that she has learned all six counties of Warrap.”

This relief is echoed by another parent, Mr Ibot, who is originally from Eastern Equatoria but whose children go to school in Yambio, “Schools have no tribes. Accepting children of different ethnicity is a good thing schools could do,” he says. “We are one nation; we don’t need disunity when it comes to education.”

Flooding in Nepal: how radio can save lives